The Scottish government has toughened the coronavirus restrictions in a bid to slow the spread of the virus.

If you live in Scotland you are no longer allowed to visit other households in their homes, or meet other people in your own house.

A curfew will also be imposed to force pubs and restaurants to close by 22:00. So what are the new rules?

Can I visit my friends and family at home? 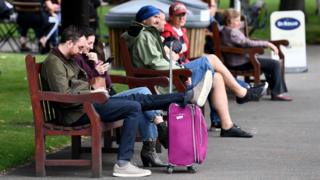 People across Scotland are being advised not to visit other households indoors from Wednesday 23 September onwards. This will become law from Friday.

First Minister Nicola Sturgeon said this was because a high proportion of new cases come from interaction with other households within homes.

This restriction was already in place for more than 1.75 million people in Glasgow, North and South Lanarkshire, East and West Dunbartonshire, Renfrewshire and East Renfrewshire.

There are exemptions for those who have formed extended households, to support informal childcare arrangements (such as grandparents coming round to care for grandchildren) and for couples who don’t live together.

There is also an exception allowing tradespeople to enter your home to carry out work.

Those who are aged between 12 and 18 are now allowed to meet outside in groups of up to six from six different households.

Police recently got the powers to break up groups of more than 15 people meeting in houses. This was extended to cover parties in student accommodation from 14 September.

But these rules were tightened up from 14 September. After that date, the limit was reduced to a maximum of six people from two households – either indoors or outdoors.

This so-called “rule of six” will still apply outdoors (including in private gardens) and in hospitality venues.

What can I go out and do now?

While you can still meet with one other household indoors in a pub, bar or restaurant, they will now have to close by 22:00.

Hospitality venues are exempt from the 2m distancing rule, but they must warn customers they are entering a 1m zone, produce revised seating plans, and take steps such as improving ventilation.

Face coverings are also compulsory in shops and on buses, trains, trams, planes and taxis.

There are no longer restrictions on how far you can travel in Scotland. However, the Scottish government does advise against non-essential foreign travel.

Outdoor markets had earlier been allowed to open, along with outdoor sports courts and playgrounds, zoos and garden attractions.

People of all ages have been able to take part in organised outdoor contact sports since 24 August.

Live events such as concerts and comedy can take place outdoors, with physical distancing, enhanced hygiene and restricted audience numbers.

What do these changes mean for work and study?

Children have been back in school since August, although pupils and staff must now wear face coverings when moving about within secondary schools.

University teaching has also now resumed, although many aspects of courses are being taught online.

The message from the Scottish government has remained that anyone who can work from home must do so whenever possible. This has also been the advice of the devolved administrations in Wales and Northern Ireland throughout.

In July, the prime minister said people should “start to go back to work now if you can” and last month the UK government launched a campaign to encourage workers back to offices.

But on Tuesday, the UK government changed its advice – it said people in England should now return to working from home “if they can” to reduce social mixing and slow the spread of the virus.

A review had been planned for 1 October on when non-essential offices and call centres could resume operations in Scotland.

But Ms Sturgeon said this review would no longer go ahead and that anyone who could work from home should do so.

Addressing employers who may have encouraged workers to return to offices, she asked them to “please rethink”.

The first minister warned that the Scottish government would “put a legal duty on businesses” to allow working from home if necessary.

When could the restrictions be relaxed again?

Commenting on a suggestion that the restrictions could be in place throughout the winter, Nicola Sturgeon said that coronavirus would have an impact on our lives until there were game-changing scientific advances like a vaccine or effective treatment.

But she said that did not necessarily mean that the latest restrictions would be in place for six months.

The measures will initially be in place for three weeks, then will be reviewed. It is likely, however, that they will be extended past the first three-week cycle.

Use the form below to send us your questions and we could be in touch.

In some cases your question will be published, displaying your name, age and location as you provide it, unless you state otherwise. Your contact details will never be published. Please ensure you have read the terms and conditions.

If you are reading this page on the BBC News app, you will need to visit the mobile version of the BBC website to submit your question on this topic.