CIRAQLI, Azerbaijan — The fate of the people of Ciraqli, in a rural corner of the southern Caucasus, had long been forgotten by the outside world since a war between Azerbaijan and Armenia halted in a cease-fire in 1994. But the conflict never ended for the villagers.

The cease-fire left the two armies facing each other along a front line, barely a few hundred yards apart. Dug in behind big earth berms, the soldiers sporadically traded sniper and artillery rounds for the next 26 years.

And so the people of Ciraqli have lived with war on their doorstep beside their own version of the Berlin Wall.

When Azerbaijan launched an offensive in September to retake territory it lost in the war, Armenian forces replied with a ferocious barrage of missiles that sent most of the villagers fleeing for their lives.

Now that peace has come, negotiated by the Russian government after six weeks of fighting, villagers were back home, picking up the pieces and patching up their roofs with a mixture of weariness and hope.

“It was difficult,” said Vugar Aslanov, 51, one recent afternoon, as he cleared debris from a mortar strike on his barn. “Imagine, there is the enemy,” he said, gesturing across his yard.

Black smoke rose from across the fields, where Armenian troops were packing up — and burning buildings — as they prepared to withdraw from the area under the peace deal. “We could not go to the fields, or on to the roof of the house because there is very little distance between us and them.” 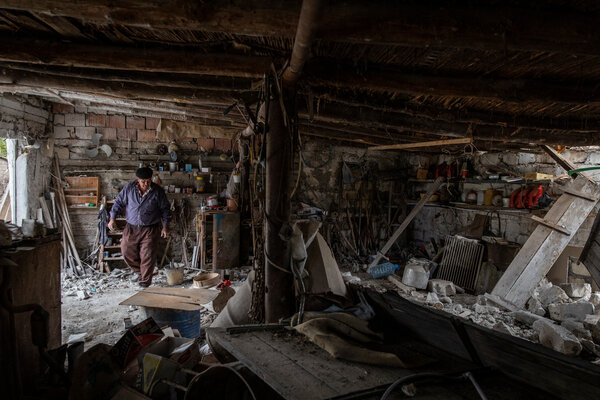 Stone walls run along the properties on one side of the village and high mud berms guarded by military lookout posts mark the frontline beyond. Several ruined houses stand abandoned in a bare stretch of land that for decades was a no-man’s land.

Over the years the casualties mounted on both sides into the thousands. The International Crisis Group counted more than 1,600 fatal casualties along the 100-mile-long Line of Contact in sporadic fire in just five years from 2015 to this year. The majority were military personnel but 256 were civilians living and farming along the line of contact.

International monitors of the Organization for Security and Cooperation in Europe made visits to the line twice a month but otherwise there was little mechanism to enforce the 1994 cease-fire.

The frontline through Ciraqli village divided family properties and cut farmers off from their fields and the market towns where they sold their produce.

Sveta Bayramova and her husband, Fikret Mamedov, built a wall at the end of their orchard to screen off their home from Armenian lookout posts. Their noisy flock of geese in the garden helped guard against intruders.

Once in the middle of the night Ms. Bayramova surprised an Armenian military reconnaissance unit scouting out their backyard. Azerbaijani soldiers were creeping up on them and when she shouted, a shootout broke out. One Armenian soldier was captured but the rest fled back over the berm.

“I have been living here 28 years and we did not feel scared a single day,” she said defiantly.

She lost her father in 1994 in the last days of the first war. A sniper shot and killed him as he was driving back from work near the frontline, she said.

It took her brother two weeks of searching before he found the car with his father still inside, but her brother was captured and taken prisoner by Armenian soldiers before he could retrieve his body.

Her brother was released but Ms. Bayramova said he never recovered from his ordeal and died of an aneurysm two years later.

His ruined home stands in a buffer zone just beyond her garden wall. Her sister’s house is also in no-man’s land, she said. To the right she pointed out an Armenian guard post atop the earth berm within sight of her wall.

Her siblings and relatives moved away from the village but she stayed on with her husband, who is a schoolteacher, and they raised three children just yards from the frontline.

The Azerbaijani army set up a camp on the edge of the village and the government helped families build protective walls along the edge of their properties to guard against stray bullets. But the toll continued.

One afternoon in January 2000, Mr. Aslanov’s father was herding his sheep and cows in the field by his house. “An Armenian sniper shot him,” Mr. Aslanov said. “He was shot under the arm. He lost a lot of blood and died.”

Mr. Aslanov, like most men in the village, is a veteran of the first war. He moved with his wife, who is disabled, and their two children to a nearby town when the war flared anew in September.

Those who stayed hunkered in their homes along with a few local policemen, demonstrating a resilient stubbornness.

They survived a monthlong barrage of rocket and mortar fire.

“It was dangerous,” said Hikmet Mamedov, 36, a wiry farmer in a leather jacket, “but why should I leave?” (Several of the villagers bore the same surname but said they were not related.)

In the war that ended in the 1994 cease-fire, Armenian forces seized control of Nagorno-Karabakh — a territory that was populated mostly by ethnic Armenians but legally part of Azerbaijan — and seven surrounding districts. They built extensive defenses against an attack by Azerbaijani forces along this part of the frontline because it offered the shortest route to Stepanakert, the capital of Nagorno-Karabakh.

Azerbaijani forces made the main thrust of their attacks on Nagorno-Karabakh in the south and never breached the frontline near Ciraqli. But that did not stop the two sides bombarding each other’s positions.

Almost half the village was badly damaged in the recent fighting.

Rovshan Mamedov, 68, stood shocked and barely able to speak as he inspected the burnt-out shell of his home just yards from the frontline. “I left 15 minutes before it happened,” he said. “We heard shells coming in so we left.”

He is now living with his wife and two grown sons in a school in a nearby town with other displaced families. “What can I feel? The most important is that we are alive,” he said.

At the other end of the village, near the small army base, Elman Mamedov and his wife Parvana had salvaged their belongings into the only downstairs room that was undamaged. Three rockets had hit the two-story building, crashing through the roof and ceilings into the rooms below.

“Bullets used to come but we were not expecting bombs,” Ms. Mamedova said.

“Before the war, everything was very nice,” her husband said, looking out from his destroyed front porch. He fought in the war and lost his brother in 1993 in the fighting in the town of Aghdam, a few miles west of the village, he said.

He voiced a quiet satisfaction that the tables had turned. “We are in a different position now,” he said. “The people who left will come back.”

Most of the villagers are small farm holders and were happy that with the departure of Armenian forces they would gain access to fields across the frontline. “We are going to have our lands back,” Mr. Aslanov said. “We will celebrate when they have gone,” his son, Sahin, 18, added.

Above all, they would welcome the absence of gunfire, Hikmet Mamedov said.

“We are not going to be scared to let our kids outside,” he said. “We saw these wars, but we don’t want our children to see them.”