Speaking on his LBC radio show, the Brexit Party leader hit back at Sadiq Khan for comparing the language used by Donald Trump to that of the “fascists of the 20th century”. The London Mayor claimed it was wrong to roll the red carpet for the US President claiming he should not have been allowed a state visit to the UK. But Nigel Farage argued that, unlike Mr Khan who wants a second Brexit referendum, the American President “at least believes in democracy”.

Mr Farage added: “We’re not directly debating Brexit but we are debating Trump’s involvement with this debate.

“Alan on Twitter says to me: ‘Intervene? Hardly. Anyway, if Juncker wants to comment on our politics then so can POTUS [President of the United States]’.

“And some even think here it’s not even right we let Trump into the country.

“I’m sorry, what is wrong with you people? Whether you like him or not, he is the President of the United States of America. 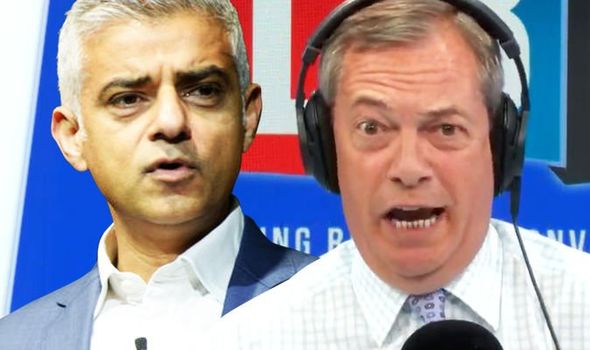 Whether you like him or not, he is the President of the United States of America

“I didn’t like Obama very much but I wasn’t going to suggest he shouldn’t come.

“That would have been absolutely crazy.”

Writing in the Observer, Mr Khan said: “President Donald Trump is just one of the most egregious examples of a growing global threat.

“The far-right is on the rise around the world, threatening our hard-won rights and freedoms and the values that have defined our liberal, democratic societies for more than 70 years.

“Viktor Orban in Hungary, Matteo Salvini in Italy, Marine Le Pen in France and Nigel Farage here in the UK are using the same divisive tropes of the fascists of the 20th century to garner support, but with new, sinister methods to deliver their message.

“And they are gaining ground and winning power and influence in places that would have been unthinkable just a few years ago.”

He added Britain’s relationship with its closest allies was like that of a best friend.

Mr Khan said: “Like a best friend you need to call them out when you think they’re wrong and there are so many things about Donald Trump’s presidency that are the antithesis of our values in London and as a country.”

He criticised the US President for rolling back women’s reproductive rights, his treatment of migrants on the US border and his decision to walk away from the Paris climate accord, for adding: “Our Prime Minister is not willing to say boo to a goose.”