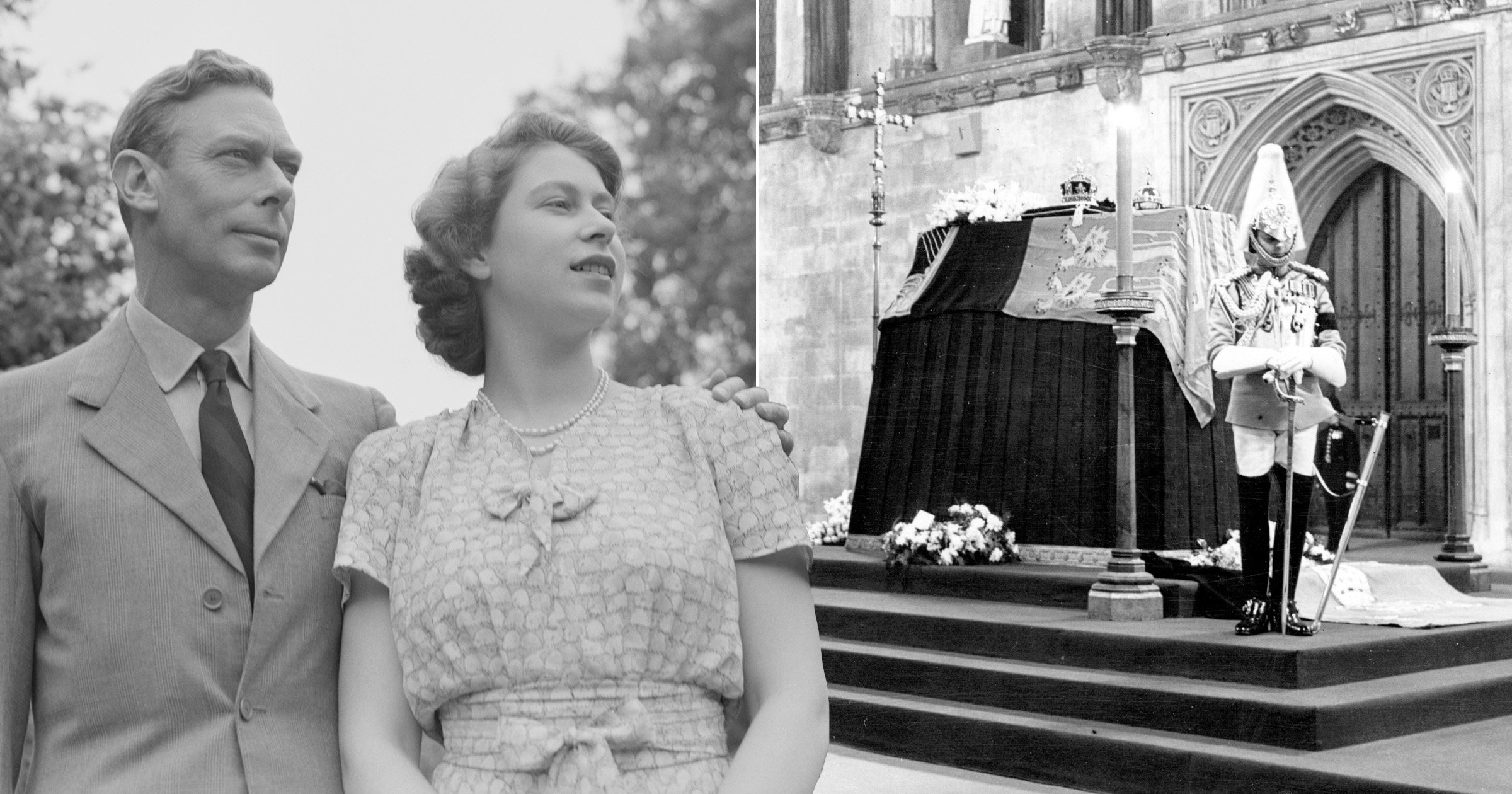 The nation came to a standstill on September 8 2022 as it was announced that Her Majesty Queen Elizabeth II had died at the age of 96.

Her sad death marked the end a record-breaking reign, leaving behind a formidable legacy for her eldest son, and new monarch, King Charles III.

She was, of course, never meant to be Queen. It was a set of circumstances out of her control that saw her father – King George VI – ascend to the throne after his older brother – Edward VIII – abdicated in 1936.

King George VI reigned for 15 years and 57 days, becoming a figure of inspiration throughout the darkest days of the Second World War.

He died in 1952, aged just 56, after battling lung cancer, with the young Elizabeth being informed of the news while on a trip to Kenya with her husband Prince Philip.

Life for the then-25-year-old royal was irrevocably changed from that moment on, as she went on to take the throne for the next 70 years.

As Her Majesty’s coffin heads to London to lie in state ahead of her funeral on September 19, join us as we take a look back to 1952, when thousands of mourners gathered in the capital to pay their respects to the last serving monarch.

King George VI died in his sleep after suffering a coronary thrombosis on February 6, 1952 at Sandringham House, Norfolk.

He was discovered by his valet in the early hours of the morning, with Buckingham Palace reportedly being informed of the King’s death by phone at 7.30am.

The news was announced to the world a few hours later at 11.15am, with the palace’s statement declaring: ‘The King, who retired to rest last night in his usual health, passed peacefully away in his sleep early this morning.’

The death of any monarch carries a codename – for the Queen it was Operation London Bridge; for her father it was Operation Hyde Park Corner – and plans were quickly set in motion following the announcement of His Majesty’s death.

A national period of mourning was declared – including the closure of cinemas, postponement of sporting events and the commencement of memorial services.

In his address to the nation, prime minister Winston Churchill stated ‘We cannot at this moment do more than record the spontaneous expression of grief.’

His Majesty’s body was placed in a coffin made from oak grown on the Sandringham estate and was initially laid in the parish’s St Mary Magdalene Church, where the King often worshipped.

He remained there until February 11, when the coffin was then taken by train from Sandringham to London.

Upon arrival in London, the Imperial State Crown was placed on top of His Majesty’s coffin, where it then began a procession from King’s Cross to Westminster Hall.

The coffin was drawn on a gun carriage by the Kings’ Troop, escorted by an officer and men from the Grenadier Guards.

Queen Elizabeth II, Queen Elizabeth the Queen’s Mother and her sister Princess Margaret followed the coffin on foot to just outside of the station before taking a car to meet Queen Mary at Buckingham Palace.

Crowds of mourners lined the streets throughout London, as the procession made its way via Kingsway, past Trafalgar Square and along Whitehall before arriving at Westminster.

Ahead of the lying in state the public learnt they could pay their respects, with The Daily Mirror reporting at the time: ‘His body will be brought to London before the end of this week and the Royal bier erected on the same spot in the historic hall adjoining Parliament where his father also lay in State.’

Once at Westminster Hall, His Majesty’s coffin laid in state – just as Queen Elizabeth II will be. It remained there until the morning of his funeral under a vigil guard.

During the procession to Westminster Hall, BBC presenter Richard Dimbleby described the proceedings to those listening at home on the radio: ‘Never safer, better guarded, lay a sleeping king than this, with a golden candlelight to warm his resting place, and the muffled footsteps of his devoted subjects to keep him company.’

A total of around 305,806 people reportedly came to pay their respects to the late monarch, with queues reaching up to four miles long at their peak.

It was dubbed The Great Queue by Londoners at the time, as it serpentined through London’s streets and bridges, starting from Westminster itself, going right along one side of the river to Lambeth Bridge, before doubling back on itself back on the other side of the bridge all the way over to Westminster Bridge.

Mourners braced wet and freezing February weather conditions, with many keeping themselves dry under umbrellas.

Despite the gloomy nature of the event, those who attended felt a strong sense of duty to their King, with one bystander telling Time Magazine: ‘I said to myself, Elsie, you put on your hat, I said, and take a bus and go up there’

On the third night of lying in state, Queen Mary came with her eldest son, the Duke of Windsor, to stand stiff and erect for 20 minutes before her son’s bier.

Early the next evening, Queen Elizabeth II, her granddaughter, slipped in with Philip and Princess Margaret. The widowed Queen also went the same night and remained for 20 minutes.

King George VI’s funeral was held in Windsor on February 15, and the day began with the coffin making a journey from Westminster Hall to Paddington station.

Another procession took place, with the coffin once again being placed on a gun carriage that Royal Navy seamen hauled as the Queen, the Queen Mother and Princess Margaret followed, as well as Prince Philip, Prince Henry, Princess Alice, the King’s cousin the Duchess of Kent, and his sister Mary, Princess Royal.

During the procession to Paddington, Big Ben rang out a total of 56 times, once for every year of the King’s life.

Once it arrived in Windsor, His Majesty’s coffin was carried to St George’s Chapel in Windsor Castle where a service was held and the King was interred in the Royal Vault.

His body was later moved in 1969 and reinterred in the newly-built King George VI Memorial Chapel – also located in Windsor Castle – which is where the Queen will be finally laid to rest.

While TV cameras were banned from the funeral itself, the procession that preceded it was broadcast by the BBC, back when there was only around around 1.5 million television sets across the country.

It was the first time such an event had been on TV, accompanied by extensive coverage on the radio.

The funeral was attended by a number of members of the royal family, from the House of Windsor to the Mountbatten and Teck-Cambridge families.

Members of royalty from across the globe also attended, including the King of Norway, the King and Queen of Denmark, The Crown Prince of Jordan and many more.

Thousands made their way to the capital to pay their respects to the King who had guided them through the Second World War, but many more are expected to visit Queen Elizabeth II as she lies in state this week.

The King was not the last member of the royal family to lie in state, as the Queen’s mother was also given the honour after her death in 2002 – an estimated 200,000 visited Westminster Hall during this time.

Queues are predicted to be around five miles long – equating to roughly 30 hours of waiting – during the Queen’s time lying in state, with even more people expected to pay their respects for the late monarch than the 300,000-plus who came to see King George VI.

The Queen’s funeral procession will not cover as much of London as her father’s, with it set to take place from Westminster Abbey to Wellington Arch after the funeral.

However many will undoubtedly line the route in order to bear witness to a moment in history, as Her Majesty completes the journey to her final resting place in Windsor alongside her husband, father and mother.