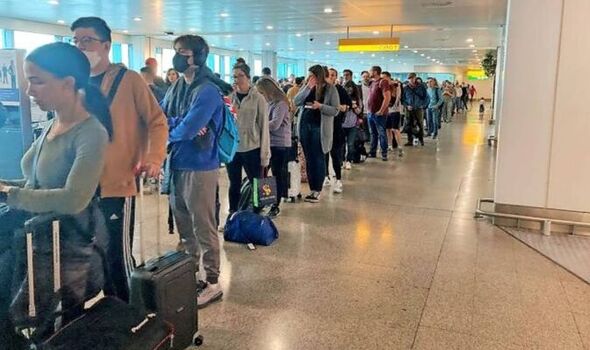 Mr Shapps is asking what went wrong, despite £8billion in aid for that was gifted to the aviation industry to get it through the pandemic. He said the Government had “done its part” and it was down to airlines and ground handlers to ensure there was no disruption.

Heathrow passengers said they had “never” seen such long queues.

“We’ve been clear that industry leaders need to tackle the issues we saw at Easter head-on.

“Although some steps have been taken, we are still not seeing the progress we need to.”

He said the Government “will be meeting with airports, airlines and ground handlers to find out what’s gone wrong and how they are planning to end the current run of cancellations and delays”.

And he said that operators “seriously oversold flights and holidays relative to their capacity to deliver” despite Government warnings.

“Government has done its part,” he said.

“It is now on airports, airlines and ground handlers to make sure everyone’s well-deserved holidays can go ahead free from the major disruption we’ve seen in recent days.”

Staff shortages have being blamed by airlines and airports, which laid off thousands of people during the pandemic and are now struggling to recruit more.

In a bid to help them, Mr Shapps introduced legislation last month that allows aviation recruits to begin training before passing security checks.

Julian Knight, senior MP and chairman of the Commons’ Digital, Culture, Media and Sport committee, said of the aviation industry: “They need to get a grip and now.

“They risk harming their industry’s reputation for years to come as well as destroying the holiday plans of thousands of Britons.”

He also called for an investigation into claims airlines are selling more tickets than they can service.

Transport minister Andrew Stephenson told Sky News: “It is for the airports to plan and recruit enough people in order to deal with the significant increases in people flying which we have been expecting for some time.”

Arts minister Lord Parkinson also sought to blame airlines and airports, saying: “Colleagues in the Department for Transport are working with the industry.

“We have been for months urging them to make sure they’ve got enough staff so that, thanks to the success of the vaccine rollout, as people are able to travel again, that people can take the holidays that they’ve missed and that they’ve deserved.

“Of course it’s causing a lot of distress for people, particularly in half-term, people with family and children with them.”

Tui revealed it had cut 43 flights a week in June at Manchester Airport, one of its biggest bases.

Each flight accommodates around 200 passengers, meaning 37,000 holidaymakers are likely to be affected this month alone.

In one incident a Tui co-pilot helped to load luggage on to a flight to Crete to ensure it could take off after a 32-hour delay.

Separately, video footage showed the moment police were drafted in to tell furious passengers at Manchester Airport that their TUI holiday had been cancelled.

Other airlines, including EasyJet and British Airways, have cancelled flights too.

It is believed that passengers booked on 240 easyJet flights to and from Gatwick over the next 10 days are being told their flights have been cancelled.

An airline source said easyJet had sufficient crew to operate its schedule, and had completed its crew recruitment programme for the summer.

However, “some flights” had been cancelled as a precaution, with air traffic control restrictions, runway works and airport handling delays in some cases “pushing crew out of
their maximum working hours and impacting on the day operations”.

Such decisions “were not taken lightly and were aimed at ensuring the airline was able to take as many customers as possible away on their holidays this summer”, they added.

Meanwhile, at Heathrow, the escalator for departures in Terminal Two was closed to limit crowds – and holidaymakers were directed to take a lift from the arrivals floor instead.

One man, squashed in a corner, complained, “It’s bloody chaos,” prompting a member of staff to reply: “Try working here.”

Rory Boland, editor of consumer magazine Which? Travel, said: “The blame game over staff shortages and flight cancellations is no help at all to passengers, who need instant action to bring an end to the airport chaos that is causing so much misery and leaving many people out of pocket.

“The aviation industry is suffering from staff shortages after thousands were let go during the pandemic.”

Insiders have suggested there are 100,000 vacancies at airports, including 10,000 at Heathrow – the world’s busiest airport.

Peter Davies, chief executive of the Airline Management Group, told LBC yesterday: “It’s down to mismanagement, in my opinion, between the airlines and the airports.

“I think it’s natural for people to go away on holiday.

“It’s not a surprise that hotter weeks tend to be particularly busy – particularly in Jubilee week – and the fact we’ve been cooped up for a couple of years.

“So there was no surprise there that people would flock back and fly. Indeed, the bookings have been increasing for many months now. So it comes as no surprise.”