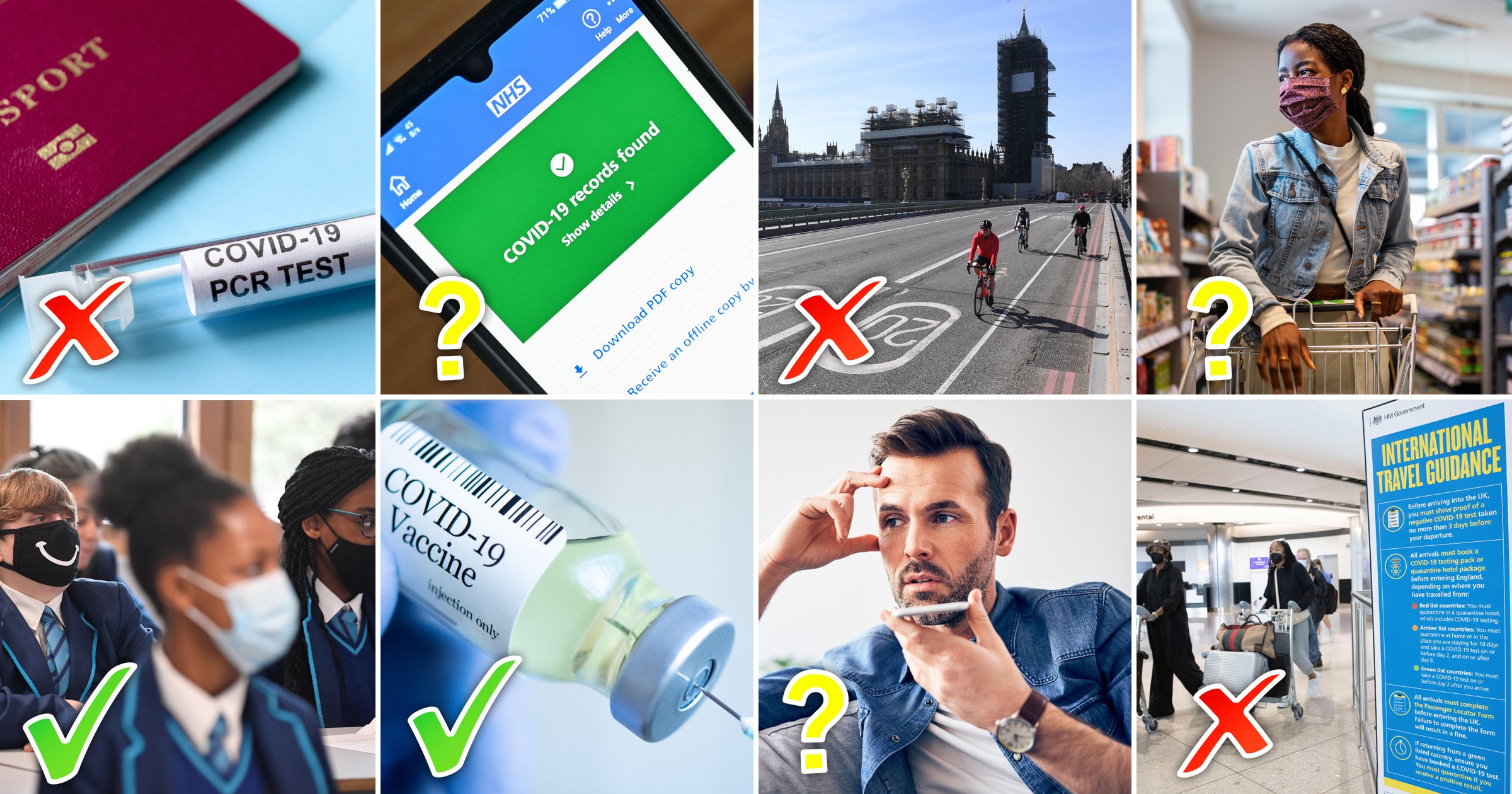 Boris Johnson is expected to give a press conference tomorrow revealing his long-awaited plan to keep Covid cases at bay this winter.

The PM is said to be ‘dead set’ against a national lockdown and will rely on a booster programme for the over-50s, vaccines for children and a flu jab ‘blitz’ to avoid a repeat of last year.

According to reports, he will tear up the draconian legislation that has given the government emergency powers to impose sweeping restrictions over the last 18 months, such as shutting schools and hospitality.

Travel rules will also be overhauled – with expensive PCR tests being ditched along with much of the traffic light system.

However, some rules could be brought back in if cases do rise.

While ministers U-turned on introducing Covid passports this month following a revolt by Tory business leaders, it remains in the government’s arsenal to deal with a surge in cases.

And it is thought that the return of working from home and mandatory masks could be re-introduced if the NHS starts to become overwhelmed.

Here we take a closer look at what is expected in the announcement tomorrow.

What measures will be ditched?

While nothing has been confirmed by Downing Street yet, a senior government source told The Telegraph: ‘This is the new normal. We need to learn to live with Covid.

‘The vaccines are a wall of defence. The autumn and winter do offer some uncertainty, but the Prime Minister is dead set against another lockdown’.

This approach has been backed by Professor Neil Ferguson, who said the level of immunity now present in the UK population meant that tackling a surge in transmission might not ‘require full lockdown’.

He said the effect of not going ahead with vaccine passports in England won’t be ‘huge’ and said vaccinating children could stem a winter wave.

Meanwhile, Sir Jeremy Farrar, another key member of the Scientific Advisory Group for Emergencies (SAGE), suggested the plan would mean deaths staying at around 100 a day.

However he said this is a level ‘that would have to in the end be acceptable’ as society comes to term with the trade off between opening up the economy and living with the disease.

He told the German podcast Pandemia: ‘Politicians across the world are sort of pretending you can have your cake and eat it:

‘You can’t have zero deaths, no control measures, vaccinate if you want to or not vaccinate and it will all end. I just don’t think that’s realistic.

‘I think [in the UK] around a hundred deaths a day, throughout the year, 30,000 deaths a year, in the current situation with the current vaccines, current treatments, current capacity within the system, I think is a level that would have to in the end be acceptable.’

While some measures that were scrapped on Freedom Day may be re-introduced, the prime minister is said to be determined to avoid closing schools or further damaging the hospitality industry with a full-scale lockdown.

He is expected to repeal Coronavirus Act powers in England that are deemed no longer necessary, including:

• Powers to close down the economy

• Powers to impose restrictions on events and gatherings

• Powers to temporarily close or restrict access to schools

He will say that the government’s central strategy is to implement a vaccine booster campaign for the over-50s and vulnerable groups to prevent a surge in hospital admissions.

However he is expected to warn that mandatory face masks could be reintroduced and work from home guidance reinstated when he outlines options to deal with a potential third wave this winter.

He will also stress that checks on vaccine status could still be a legal condition of entry to large events.

Boris Johnson is also expected to announce that the traffic light system for travel will be scrapped.

Instead of rating countries as green, amber and red, there will be a simpler system consisting of a go list of countries, and a no-go or ‘red’ list of destinations, according to The Daily Telegraph.

Travellers who have received both doses of the vaccine will only need to take a lateral flow test before flying back to the UK and another two days after their return – avoiding costly PCR tests.

However, unvaccinated people will still need to take a PCR test and those returning from red list countries will still have to quarantine in government-selected hotels, reports suggest.

What measures will be in the winter plan?

Vaccines are expected to be at the heart of the government’s winter plan. While every adult in the country has now been offered two jabs, ministers fear immunity is waining in the elderly and vulnerable.

Health Secretary Sajid Javid said on Sunday that a booster programme for third doses is ready to begin as early as this month.

The government is waiting on recommendations from the Joint Committee on Vaccinations and Immunisation (JCVI), which are expected this week.

The JCVI have spent months studying how boosters should be rolled out – including whether different vaccines can be ‘mixed and matched’ and if they can be administered alongside a flu jab.

The Medicines and Healthcare products Regulatory Agency (MHRA) has already assessed that the Pfizer and AstraZeneca jabs are safe to use as boosters, but the JCVI has yet to give its advice.

The JCVI has already approved third doses for around 500,000 people with weakened immune systems.

However, they don’t count as a booster programme as it will only apply to people in whom the first two doses might not have worked.

Children aged between 12 and 15 could be offered a single vaccine as early as next week.

Currently, jabs are only being offered to anyone over 16, after the JCVIsaid the margin of benefit from vaccinating healthy children was too small to say they should receive one.

The UK’s chief medical officers are now drawing up advice to government on the wider societal benefits of vaccinating children, such as the impact it will have on their education.

There is said to be widespread expectation in Whitehall that the programme will be given the green light.

In a series of interviews yesterday, Mr Javid said that jabs for 12 to 15-year-olds were ready to be given within a week of a decision being made, and that they may only need one dose to ensure protection.

And Prof Ferguson, who was instrumental in imposing the first lockdown, said today that children should be vaccinated to boost the UK’s immunity levels and stem the risk of a large winter wave of coronavirus.

No10 fears a double whammy of flu and Covid could overwhelm the NHS this winter, leaving ministers with no choice but to impose restrictions.

The government has already announced plans for the ‘biggest flu programme’ in history this winter, with millions more people set to be offered the jab for free.

According to reports, Downing Street will launch a massive ‘flu shot blitz’ alongside a large-scale advertising campaign urging people to get both the flu and Covid jab.

Who can have the flu jab?

Who can have the flu vaccine?

During the 2021 to 2022 season, which starts in September, the flu jab will be available for free to:

Anyone else can choose to get the flu jab by either paying or going through any health insurance initiatives (usually offered to people by their employers, for example

What other measures could be introduced?

While scientists are increasingly confident another lockdown won’t be needed, ministers have publically refused to rule this out as an option if the NHS does become overwhelmed.

Work and Pensions Secretary Theresa Coffey said today that it’s ‘fair’ to say that lockdowns, compulsory masks, social distancing and working from home orders are all tools that remain at the government’s disposal.

However, she said the success of the vaccination programme means decisions on this do not need to be made now.

Boris Johnson announced in July plans to introduce Covid vaccine passports for nightclubs and other large events by September.

But in a morning of mixed messages, the Health Secretary said yesterday that no final decision had been made on passports for clubbers — before confirming they would not go ahead just one hour later.

The U-turn comes after major backlash from within the Tory party, with rebel backbencher Mark Harper branding the plan ‘pointless, damaging and discriminatory’.

However, while passports may not be introduced any time soon, they have not been ruled out all together.

Mr Javid said they would remain as a ‘reserve option’, while Ms Coffey said today that the introduction of vaccine passports has not been ‘ruled out forever’.

She told BBC Breakfast: ‘As Sajid Javid set out yesterday, although the formal decision is still to be made, but having reflected and looked at the details of the proposal that it’s not deemed necessary at this moment in time.

‘But they haven’t been ruled out forever. It’s reflecting the fact that a lot of young people have come forward and got their vaccinations over the summer.’