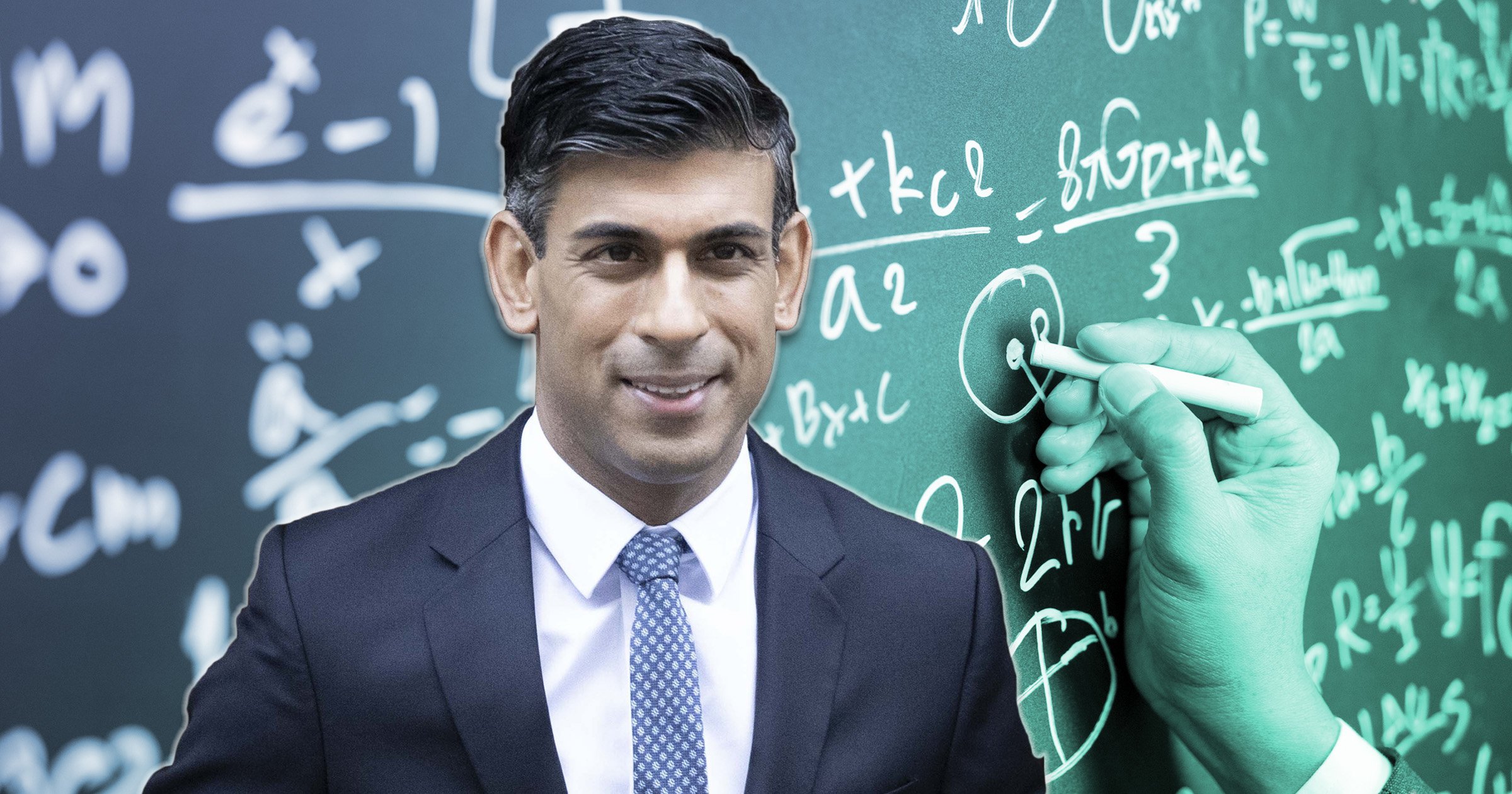 When I read Rishi Sunak’s new plan to boost numeracy skills by making pupils in England study maths until the age of 18, my instinctive reaction was that it was like seeing a burning building and deciding to change the curtains instead of tackling the blazing inferno.

It is an undeniable fact that England has a maths problem. But you can’t solve a problem like this without addressing the root causes behind it.

As the government acknowledged yesterday, 8million adults in England have the numeracy level of primary school children, while 60% of disadvantaged pupils lack basic maths skills at the age of 16.

We are drastically behind other OECD countries like Japan and Poland when it comes to maths proficiency, according to most recent figures.

But what Sunak failed to mention is the belief of many, including teachers like me, that the scourge of poverty and the legacy of his party’s austerity measures has made both teaching and learning harder; from overworked, underpaid teachers struggling to cope, and pupils going hungry in the classroom.

It’s just one of the reasons why the Prime Minister’s proposal to force kids in England to learn maths until the cusp of adulthood is entirely untenable.

Firstly, who will teach these hoards of extra 16 to 18 year olds in their mandatory maths lessons?

England doesn’t even have enough teachers to deliver the curriculum as it currently stands! The profession is experiencing a recruitment and retention crisis of unprecedented scale and things are only getting worse.

Ministers have missed their own recruitment targets for nine out of the last 10 years, and the number of people who signed up to be teachers last year was 20% lower than the year before.

It’s little wonder that teaching is an increasingly unattractive career prospect in the current economic climate when you consider how, year after year, our pay has failed to rise in line with inflation.

With experienced and qualified teachers leaving in droves for greener pastures, it remains a mystery how Sunak proposes to staff his landmark education policy.

But it’s not just about the practicalities.

This is simply not what the sector needs. Maths is an issue, but that could be improved with pouring more funding into securing high calibre teachers; luring experienced engineers or academics into the school classroom, for example.

But if the government really wants to make a change in the education sector, there are more pressing concerns.

Our schools need significant funding to be funnelled into mitigating the impact of over a decade of austerity and cuts to education services, not to mention the ongoing legacy of the pandemic.

Across the country, students are studying for exams in classrooms that are in such a bad state of disrepair that officials deemed them a ‘risk to life’. Buildings are kept freezing cold because school leaders cannot cope with the ever-soaring cost of heating bills.

Subpar resources and teacher shortages and cuts to extracurricular provision like after school clubs, have a real impact on the life chances of young people.

And as always, it’s the most deprived who will bear the brunt of these consequences in their adult prospects, no matter how much maths they are forced to learn.

Extra numeracy lessons will do nothing for our young people other than to overburden an education system already on its knees.

Time and time again, the government consistently, willfully, misses the point of the problem.

Real life does not stop at the school gates.

The problems facing education are the same issues facing the wider country, ripping through households up and down the nation.

The problem is poverty and what seems to be the government’s blatant disregard for the poorest lives in Britain.

If social mobility was a priority of the government, then maths lessons would not be the place to begin.

The government needs to begin with making sure poor kids have full bellies and warm homes, that they are sheltered from the burdens of food poverty and housing insecurity and that their parents have adequate resources to provide a fulfilling life for the next generation.

What does it mean to be one of the richest nations on earth, if, in Britain’s capital, almost half of all children have faced food insecurity, while a fifth regularly go hungry due to a shortage of money?

Those are the numbers that should really concern us.

By focusing on subpar numeracy skills, the government is once again concentrating on symptoms, rather than causes.

And if you look at the Conservative Party’s decade-plus track record of decimating public services through austerity and cuts, harming the communities we teachers serve in the process, it begins to look a lot like a case of deliberate and convenient distraction from the real issues.

Mandatory maths until 18 could be an effective strategy for a system that is functioning and a nation that is flourishing. But ours is broken. Sunak’s plan is a rotten cherry placed on top of an unbaked cake.

A numeracy strategy is well and good, but poverty is leaving children hungry and cold and burdened with instability and hardship from birth, and these families need money for food and clothing and housing, far more than they need quadratic equations and algebraic formulas.