Gas is an essential commodity in the UK, used in household heating, heavy industry and electricity generation. Domestic production satisfies around half of the country’s demand for gas, with the rest coming from abroad. The vast majority of imports arrive via pipeline from Norway, but liquefied gas shipments from the US and Qatar have also become significant in recent years. On September 6, Jacob Rees-Mogg took over as Business Secretary in Prime Minister Liz Truss’s Cabinet, and immediately faces the challenge of getting the energy crisis under control.

The soaring cost of energy is the driving force behind the cost-of-living crisis UK households have been enduring for many months now.

In August, state regulator Ofgem announced the energy price cap – the ceiling for the average annual household bill – would rise by 80 percent to £3,549.

As analysts forecast far worse to come, charities such as National Energy Action warned of millions falling into fuel poverty over the winter, with some facing the choice between food or heating.

However, within days of taking office, Ms Truss established an Energy Price Guarantee – limiting typical household bills to £2,500 from October for the next two years, with the Government fronting the cost to suppliers.

Even with this new price cap in place, the uniquely vulnerable setup of the domestic energy market means bills in the UK will still be at record high levels. 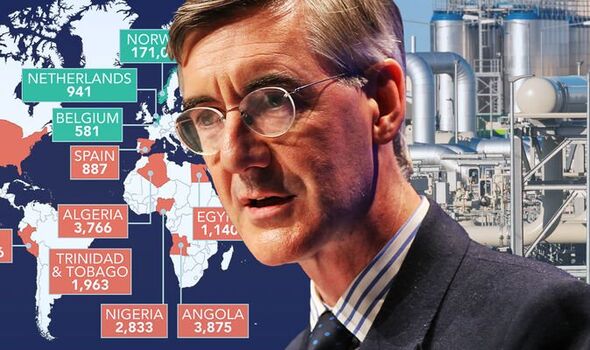 Gas is an absolutely essential commodity in the UK, used in everything from heavy industry, the heating of private homes and electricity production.

The UK began expanding its production of natural gas in the early 1970s, and demand grew rapidly over the following decades as a result.

Since 2000, domestic production has been in decline, making the UK increasingly reliant on imports to meet its gas demands.

Now, imports from the international market account for roughly half of the UK’s gas supply, according to the Department for Business, Energy and Industrial Strategy (BEIS).

In a bid to save money, successive Governments have been shutting down the UK’s gas storage facilities – the last of which being the Rough site in 2017 – resulting in the country holding just one percent of its annual gas demand, relative to the EU average of 25 percent.

As a result, the Government sources the country’s gas supplies at on-the-spot market rates – making the UK especially vulnerable to price spikes. 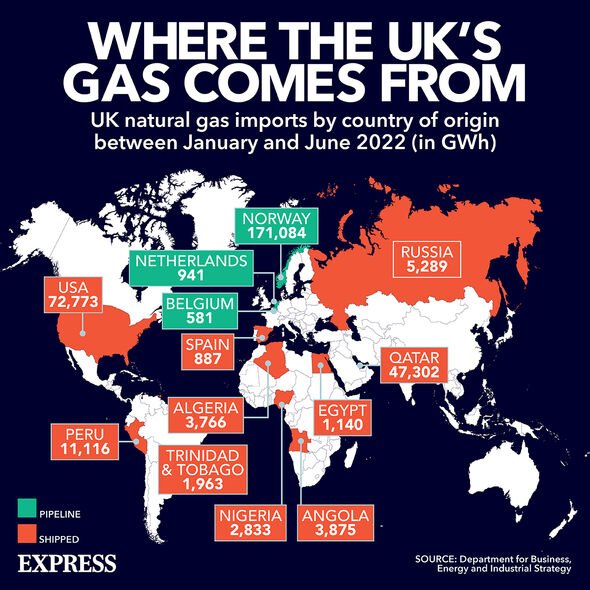 Norway is the UK’s largest gas supplier by a significant margin, accounting for 77 percent of all gas imports in 2021, according to the BEIS, worth £14.5billion.

The UK receives 25.5 percent of all the natural gas Norway exports, second only to Germany which gets 45.5 percent.

The UK also has direct pipelines to Belgium and the Netherlands, through which respectively four and five percent of the UK’s imported natural gas flowed in 2021.

The remaining portion of gas imports came as Liquefied Natural Gas (LNG) – gas that has been cooled to the point where it becomes a liquid so that it can be transported by tanker ship and regasified on arrival.

The United States has traditionally been the UK’s largest supplier of LNG, followed by Qatar and Russia – those three alone accounting for 86 percent of all LNG imports in 2021.

The UK was the third-largest European importer of LNG in 2021, behind Spain and France. 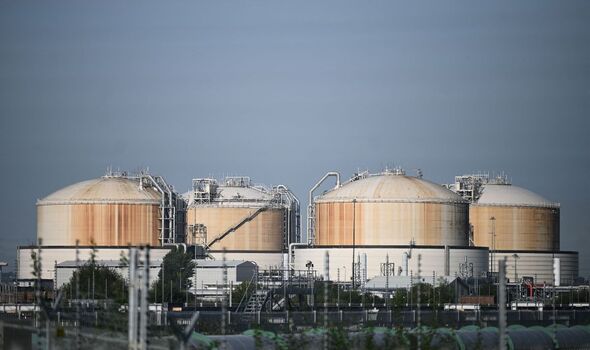 In response to Russia’s invasion of Ukraine, the Government announced plans to phase out Russian fuel imports by the end of 2022 – including the 4.9 percent of its natural gas imports.

This goal was achieved six months ahead of schedule, as for the first time since records began, there were no imports of Russian fuel to the UK in June 2022, according to the Office for National Statistics (ONS).

However, this decision, along with the raft of sanctions imposed on Russia since the start of the conflict in February, is at heart of the energy crisis into which the UK and Europe has been plunged.

Up until this year, Russia has typically been the world’s largest exporter of natural gas. Although the Kremlin denies using export supplies as a retaliatory weapon, the flow of Russian gas abroad has decreased dramatically since the war began, causing the price to skyrocket.

Historically, the EU has imported up to 40 percent of its gas stocks from Russia alone, and as a result reported record 62.5 percent gas price inflation over the year to August, according to Eurostat. In the UK, gas prices have risen by 95.7 percent.

The consequences for energy bills in the UK are even more severe when taking into account how crucial gas is to electricity production.

Between 1990 and 2021, gas became the UK’s single largest source of power generation, soaring from less than 0.1 percent to 39.8 percent.

In the year to August 2022, electricity prices in the UK rose by 54 percent, according to the ONS.

Energy prices have been tipped as the driving force behind the record consumer price inflation rates posted throughout the year, which hit a 40-year high of 10.1 percent in July.