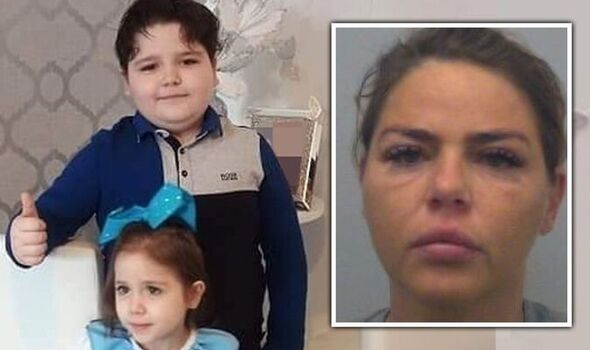 Mary McCann, 35, was driving her Vauxhall Astra car down the M1 with her daughter, Lilly and son Smaller, in the back of the car shortly after 11pm on August 9, 2021. The vehicle hit a Scania HGV, with her two children, aged four and 10, killed instantly in the collision near Milton Keynes, Buckinghamshire.

Earlier in the day, the children were pictured together with a balloon celebrating Smaller’s on his 10th birthday that day.

Ms McCann was charged soon after the crash after police discovered she had been drinking to excess.

She was jailed for four years and one month at Aylesbury Crown Court on Monday (April 25).

Ms McCann earlier pleaded guilty to two counts of causing death by careless driving whilst under the influence of alcohol.

During the drink-driving incident, Ms McCann had consumed at least 98 milligrams of alcohol per 100 millilitres in blood.

The levels meant she was over the legal limit of 80 milligrams.

She was also speeding at at least 72mph on a stretch of motorway where the speed limit had been reduced to 60mph.

Ms McCann was arrested in September 2021 after failing to answer bail following the youngsters’ funerals, the court heard.

Stephen Shay, prosecuting, told the court: “Shortly before the collision the lorry was in lane one and the lorry was moving into lane two. The defendant was driving in lane two.

“For no obvious reason, the defendant drifted into lane one. She steered right in an unsuccessful attempt to jump the lorry.

“The car sustained catastrophic damage to the rear side and rotated anticlockwise.

“Lily was ejected from the right of the car before it moved into the central reservation.

“The defendant said: “God, why didn’t I put their seatbelts on?”

“Lily would not have been ejected from the car if she had been restrained, and she may have survived.

“Smaller would have remained in his seat if he had been restrained in the seat.

“His fatal injury was likely to have been caused by his head striking the damaged part of the car.”

Lorry diver Simon Denton told the court in a victim impact statement that the horror smash had left him suffering from nightmares and flashbacks.

He added: “This has left me depressed, anxious and in constant fear.

“I cannot go out and when I do I am looking behind me. I am scared.

“When she absconded I thought ‘why can you not stand up and take responsibility for what you have done?’”