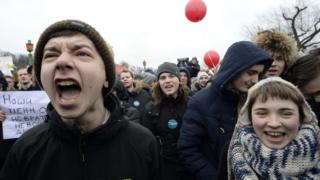 Alexei Navalny is in custody after an unsanctioned protest; social media is full of photos of peaceful demonstrators being dragged off by police, or even beaten; the Kremlin says Sunday’s rally was a provocation and the whole fuss has been studiously ignored by state television.

So far, so relatively normal for Russia. Or maybe not.

Why protesters across Russia defied the law

There were several striking things about the protests that swept Russia this weekend.

First of all was the fact that people defied direct orders by the police to stay off the streets.

Russia has harsh anti-protest laws and even those staging peaceful, one-person pickets are regularly detained. But on Sunday, tens of thousands came out to show their anger at high-level corruption.

That will worry the Kremlin.

The laws were tightened after the last mass rallies in 2011-12 sparked by allegations of vote-rigging. Those largely unsanctioned protests started small and morphed into a mass wave of anger against President Putin. Tougher penalties were meant to prevent a repeat of that.

Then there’s the geographical spread of the rallies, covering more than 80 cities across Russia’s vast landmass. They varied in size and scope but the anti-corruption cause is proving a popular one.

Who are the protesters?

Perhaps most striking of all, though, was the make-up of the crowd which included significant numbers of young people, even schoolchildren.

The Kremlin’s spokesman has criticised organisers for luring them on to the streets, claiming they were paid to turn out. Silent until he spoke, state TV channels have picked up that suggestion and run with it.

But these were young Russians who have grown up under Vladimir Putin on a diet of patriotism. On Sunday, they joined a crowd chanting “Putin – thief” and “Russia will be free!”

Their presence is proof of how effectively Alexei Navalny and his team use social media.

How Navalny harnessed the internet

He is a prolific blogger and tweeter himself and his team of young activists produce slick videos at his anti-corruption fund that drive their message home. Every protest and every court hearing is streamed on the internet.

That skill helps the activist reach large audiences as well as young ones. He is banned from state television but his team’s latest film detailing corruption allegations about Russia’s prime minister has been viewed around 13 million times on YouTube.

By contrast, Sunday’s rally was ignored by all the main TV channels in a move that can only have been deliberate and co-ordinated.

Today, President Putin’s spokesman faced a barrage of journalists’ questions about the protests. He insisted that the Kremlin doesn’t feel threatened, and that the rallies were illegal and irresponsible.

But the authorities don’t seem sure how to deal with Alexei Navalny.

Why Navalny worries the Kremlin

Unlike other opposition challengers, his cause is not democracy – a dirty term for many here, after the criminal 1990s – or any vague concept like human rights. It’s very concrete: corruption.

As many Russians feel the squeeze from sanctions and the falling oil price, the idea of an elite enjoying designer watches, luxury yachts and vast estates is likely to anger them even more.

Sentenced to 15 days behind bars, Alexei Navalny has temporarily been removed from the picture. More than a dozen staff at his anti-corruption fund have also been detained, and on Sunday the office was closed.

But the activist has vowed to fight on.

In court, Alexei Navalny said the fact that tens of thousands had protested on Sunday despite the risk meant that many more Russians agreed with them.

“There are millions of us,” the activist told journalists in court, “and we’re not going anywhere”.

Admit it or not, the Kremlin will have taken note.