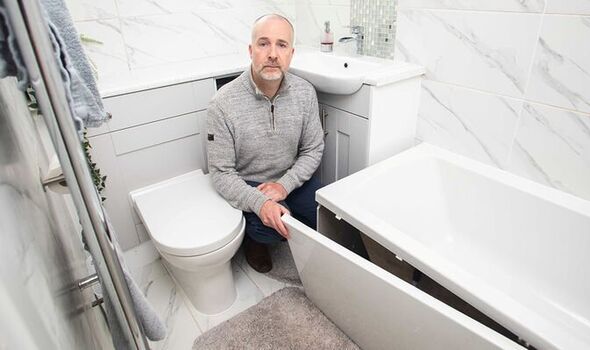 Giovanni Wallace said the work was supposed to be finished within two weeks, but instead he claims the workmen downed tools and left their home a “death trap”. The 50-year-old, who was forced to retire early due to a work-related accident, spend a large chunk of his pension of the refurbishment.

Mr Wallace, from Barnstaple, Devon, said the situation turned nasty after he and his wife complained that the work was taking too long and that the quality was poor.

He told The Mirror: “Since that point nearly three years ago, we have been bullied, ignored and threatened by Wickes to the point my wife has started to suffer with mental health problems.”

Amid the ongoing dispute, Giovanni has forked out thousands more in lawyers’ fees.

The ombudsman and a professional surveyor have also got involved and filed separate reports.

The latter listed “over 100 items that were substandard or not finished”, he said.

Wickes says it will “discuss a suitable level of compensation” and says it is “committed to resolving the matter quickly with the best possible care”.

Among the more pressing problems are exposed wires in the bathroom, removal of spotlight fire safety covers, water damage leaking over electrical plugs in the lounge due to split sealant, an unducted extractor fan meaning water flows back into it, and no heating in the bathroom, leading to mould as they can’t open the window in winter.

Added to that is a dual socket fitted dangerously close to the cooker, which has also had a hole gauged out to run a gas pipe through.

An electrician, who was subcontracted earlier this year by Wickes to look over the complaints made, wrote in a report in January – seen by the Mirror – the live cable hanging above the sink in the bathroom could result in a “potentially lethal situation!!!”.

Mr Wallace said the electrician described the job as “the worst he’s ever seen” and has even contacted them in his own time to check whether corrections have been made.

“His report was very damning to Wickes, but they are now refusing to accept his findings,” Mr Wallace said.

“Wickes know we cannot afford to take them to court so they are just bullying us.”

The couple forked out an initial £9,972 in March 2019 – with the work, on recommendation of Wickes, to include a new boiler fitted in the attic.

The five-day job to complete the bathroom began in June that year, with the fitter quickly telling them it would take a full week, the couple claim.

Two weeks in, he started on the kitchen, but suddenly it got to the five-a-half-week point and he stopped turning up.

“He was going to other Wickes jobs instead of us,” Mr Wallace said.

“Not even contacting us, giving us sob stories which weren’t true because his other Wickes people would come in, like the refuse men, and say ‘oh no, we’ve just seen him at another job, he’s doing such and such’.”

The couple then complained but Wickes said they wouldn’t take their complaint on until they had paid out an extra £1,687 – which they did.

But, from then on, Giovanni said the whole process has been stop-start.

He said Wickes were “so slow” at this point to get the work going again he paid a solicitor “to try and help speed the situation up” to little avail.

Once Covid struck in spring 2020, Mr Warren said they had the “perfect excuse” to stop completely.

The couple then contacted the ombudsman and a surveyor but said they’re “being forced to capitulate on everything” by Wickes.

Mr Warren claims the company is now denying the ‘shoddy’ work, which also includes unsealed work surfaces and the shower fitted incorrectly, as well as botched tiling and grouting jobs, has anything to do with them.

“We are just being bullied from pillar to post by them,” he continued.

“We tried to go down the route of breach of contract but they just dragged their heels and it’s costing us thousands of pounds each month just to keep a solicitor working.”

Mr Warren estimates he and his wife have paid around £2,500 in lawyers fees.

The cooker had allegedly been signed off for use by an initial electrician but the second – who came out to look over the complaints – said it is “potentially lethal”, he claims.

“When we cook, we can’t use one of the gas burners because it’s two mobile phones’ length away from the gas burner – but it’s right over the cooker,” explained Giovanni.

“If there was a hot pan on that it could disintegrate the socket, without a doubt.

“Throughout the winter it’s a mad dash into the bathroom and straight back out again – it’s the only bathroom we’ve got.

“You can’t take a shower properly because every time you’ve got to waterproof it, so it doesn’t seep through the hole by the bath, and goes through and damages the wall even more.

“The bathroom tiles are covered in massive chunks of cement grout that have just been put on.

“Massive big tiles just dabbed onto the walls, on dried powder behind.

“You can hear it, every time you tap them it’s just hollow, so you don’t know if they are coming down on your head when you’re in the bath.”

The second electrician was told two-and-a-half years in to check for “any immediate work” that needed doing, before discovering the hole in the cooker and extractor fan problems – and filing his report, Giovanni said.

“They dispute everything,” said Mr Warren, of Wickes’ reaction to any findings.

With their children having previously moved out, he and his wife planned to have the refurbishment done so they could sell the house.

But due to the ongoing dispute they can’t put it on the market.

“Any estate agent comes round and sees the place and says ‘not a chance, there’s so much work,’” he said.

“Every morning you’re going into the bathroom and the bath panel’s hanging off. That’s been re-fitted three times.

“You see the electrical things you’ve got to tuck away before you can use the sink.

“The mould growing on the walls and the ceiling and you think ‘great’.

“Then you walk into the kitchen and see no tiles up and think ‘oh, I can’t use that part of the cooker because it will burn that socket’.

“The socket behind our fridge, it had been left unsecured, so when we were tidying behind and pulled, the whole thing went off,” he added.

Giovanni said he has slowly watched the home he has lived in for six years “destroyed” and the perpetrators “refusing to admit it’s their fault”.

“Initially we did want our money back and the product removed but we just want it repaired so we can get out of this house.

“It’s nothing but bad memories here now for this.”

A spokesperson for Wickes said: “We’re very sorry to hear about the experience Mr & Mrs Wallace had with the installation of their kitchen and bathroom as we always strive to deliver outstanding customer service.

“Upon hearing the issues raised, a full and independent inspection was conducted by The Furniture & Home Improvement Ombudsman to help us understand the outstanding work from the original installation.

“As a result, a refund of the dry fit installation costs was offered to Mr & Mrs Wallace, and once an agreement is reached, we will further discuss a suitable level of compensation.

“We are committed to resolving the matter quickly with the best possible care, therefore a further on site visit will be conducted by a senior team member on 8th June to discuss their ongoing concerns. This date has been agreed with Mr & Mrs Wallace.”

According to an email sent to Mr Warren by the company earlier this month, seen by the Mirror, the refund is £2,163, as well as the supply of “any and all necessary materials” for a third party to complete the work.