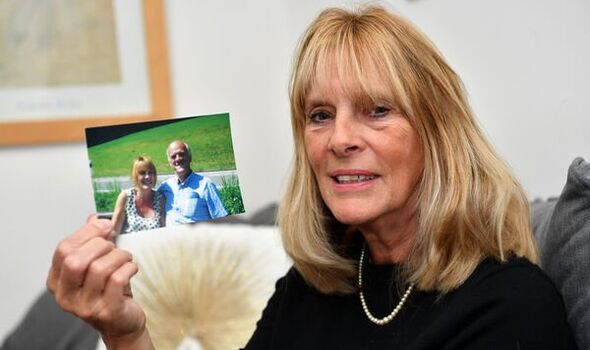 A widow fighting to change assisted dying laws in the UK says her terminally ill husband “didn’t want to die abroad” before being forced to travel to Switzerland to end his life. Anne Norfolk and her partner Patrick had to raise £10,000 to help secure treatment with the firm Dignitas after he had been diagnosed with motor neurone disease (MND). Around the world, more than 200 million people have access to assisted dying laws, including in the USA, Spain, Belgium and the Netherlands. But in the UK the practice remains illegal and anyone helping another person to die could be prosecuted for murder or manslaughter.

Anne’s husband Patrick sought help to die four years after he was diagnosed with the degenerative condition MND.

She said his hope had always been to finish his days at home rather than travelling and undergoing the “peaceful” procedure abroad.

“Patrick was determined that he would be able to take his own life when he had been diagnosed with MND.

“He trawled the internet trying to find ways to do it all the time, so the strain of all of that for both of us during that time was dreadful.

“Although we did talk about Dignitas right from the beginning, the decision to go was not one he wanted to do.

“But he really had no option because if we hadn’t gone then he wouldn’t have been able to go and would have been suffering to the end.

“The shame about it is that had the UK law been in place then those four years would have been so much more pleasant because he would have known that when he couldn’t cope with it no longer he could have just asked for the assistance required.”

Anne said she and Patrick, who have two adult daughters, had no one to talk to or advise because of its illegality.

She said: “You are very much by yourself through this situation.”

The family stayed in Switzerland for four days, after travelling there in 2012, where Patrick was able to talk there to a “lovely GP” about his life and why he was seeking their assistance. Anne said the event was filmed for the Swiss authorities and Patrick was asked if he knew what he was doing.

Anne said: “The doctor gave him so much dignity and respect and it was such a relief that someone was on the same page and going to help – I can’t praise them enough

“It was just a very calm and peaceful place and we chatted for about two or three hours before he decided to go.

“There was nothing unpleasant about the whole process – there was no choking or vomiting, for example – and it was so peaceful, calm and easy.

“For me, it was the most beautiful experience it could possibly have been and I have experienced being with other people who have died – not through assisted dying – both before and after Patrick.

“It is sad when you think you could hopefully have something of a similar experience here if the laws were changed. The only that is going to happen is if the MPs will pledge time in Parliament for a proper debate because the ones we’ve had recently have been timed out.”

Anne, who is campaigning for change in UK’s laws concerning assisted dying, said it cost around £10,000 – a high cost she called “prohibitive” for many people.

She said: “It’s dire that not only are you dying and nobody can speak with you to help you make a decision. But then if you can’t afford it anyway then you’re excluded before you’ve started”

Molly Pike of Dignity in Dying, a not-for-profit Surrey organisation, said: “With no clear vehicle for law change in England and Wales, every day terminally ill people like Patrick are being forced to make impossible decisions between suffering, suicide or seeking the compassion of another country.

“Meanwhile, momentum for assisted dying laws are growing in this country and around the world. Parliament is now seriously out of step with the British public – 84 per cent of whom was to see safe, compassionate assisted dying laws for the UK – and all political parties must urgently commit to break the deadlock to give this issue the parliamentary time and respect it deserves.

“A safe, compassionate assisted dying law for the UK is a matter of when and how, not if.” The company estimates that up to 650 terminally ill people a year take their own lives, with up to ten times as many attempts – either alone or with compassionate but illegal assistance from loved ones.”