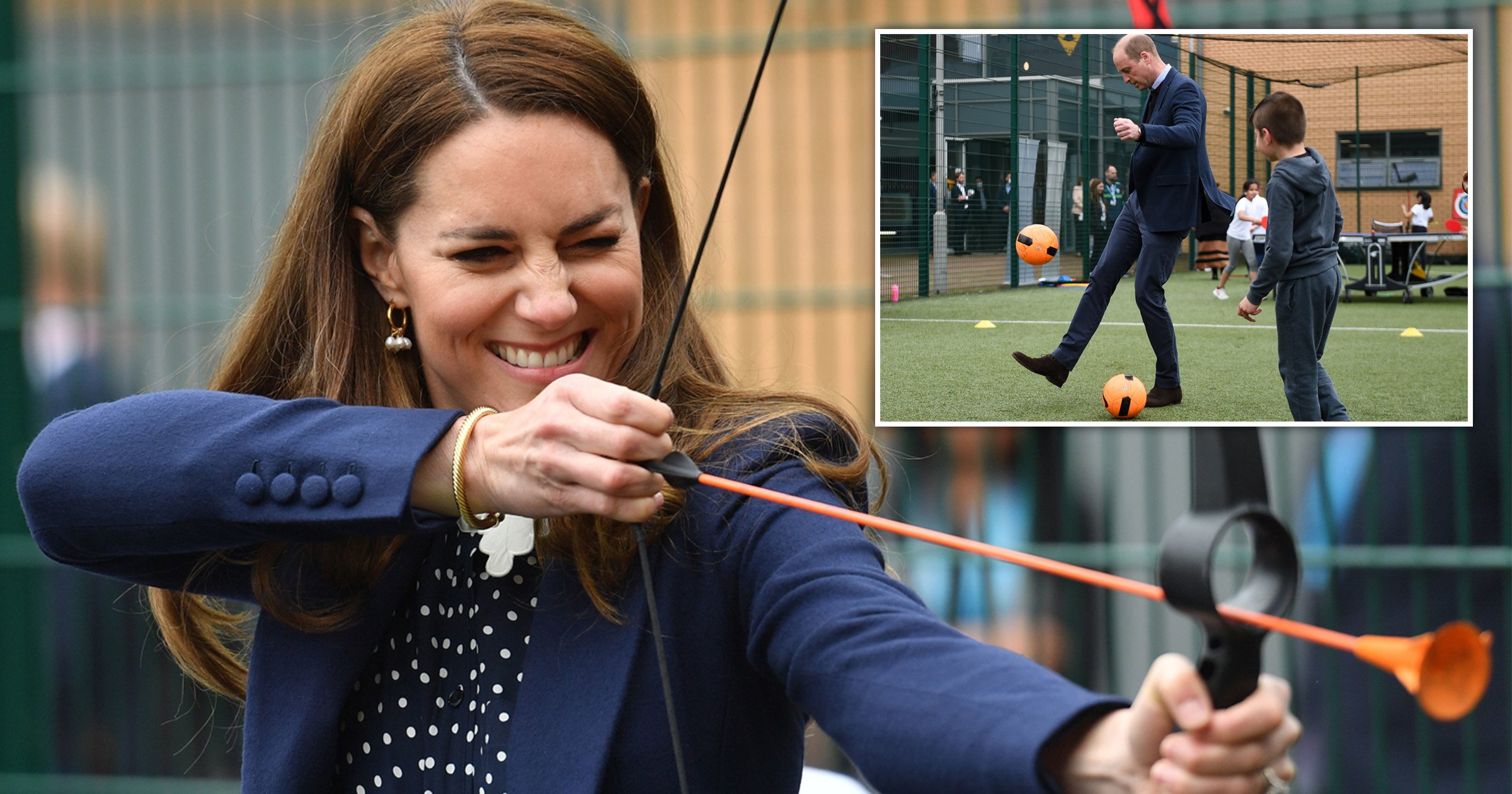 William and Kate have visited a youth centre in the Midlands to learn about projects supporting young people’s mental wellbeing.

The Duke and Duchess of Cambridge marked Mental Health Awareness Week by spending the day in Wolverhampton, where the couple played each other at table tennis and mocked their own sporting abilities.

Kate described her archery skills as ‘terrible’ after missing the target during a visit to The Way Youth Zone, an organisation that provides sports, arts and recreation activities for youngsters.

William described his wife as ‘really good at table tennis.’ But the future King and President of the FA was less complimentary about his own footballing prowess, as he struggled to do keepy-uppies and admitted ‘I’ve got no left foot at all’.

The Cambridges, who took part in various activities with youngsters – including meeting a guinea pig called Gus and a bearded dragon – have been vocal supporters of initiatives aiming to improve mental health.

Therapy sessions with animals, run by the organisation HugglePets in the Community, aim to relax children and enable them to speak freely.

Eight and nine-year-olds from Loxdale primary school in Bilston, Wolverhampton, had been referred to the six-week long sessions by their teachers to support their mental health.

The couple listened as the children took it in turns to hold a rabbit and talk about something positive in their lives, and later did some gardening and art.

Those who come to the city centre Way Youth Zone are also offered advice and support on health and wellbeing, life skills and independent living, and can explore different foods and learn to budget in the training kitchen.

Metro.co.uk has been running a series of articles and celebrity takeovers to highlight the issue this week.

The theme of the week this year is the role nature can play in improving psychological wellbeing.

The Duke and Duchess joined a group of young people during a wellbeing session and met a group of HeadStart ambassadors.

The programme is designed to improve the resilience and emotional wellbeing of children and young people by giving them the skills they need to address the challenges of modern life.

During their day in Wolverhampton, the couple also visited Base 25 in the city centre and met staff and clients of the charity, which supports young people who have difficulties in accessing mainstream services.

Alan Jarvis, head of service, told the royal visitors: ‘Our service has changed to adapt to the needs of young people. We never closed any of our services and we saw a sharp increase in people committing self-harm and being targeted for child sexual exploitation.’

William and Kate chatted to Ellie-Mae O’Sullivan, 17, who described how she had been affected by child sexual exploitation, but with support from Base 25 was receiving counselling.

With her 18-month-old son Noah in her lap, she said: ‘It was having someone to talk to more than anything.

‘It helped me open up and realise what had happened to me. I wouldn’t be here now if it wasn’t for them.’