LONDON — When the firestorm surrounding Prime Minister Theresa May and her plan for Britain’s exit from the European Union had quieted a little, the country’s political class finally had time to focus on the thing it really likes: plotting.

In a secret location, the chairman of a panel called the 1922 Committee was collecting poison-pen letters from rebels within Mrs. May’s Conservative party, calling for her to be removed as leader.

The number of letters is secret except to the chairman, Graham Brady, but once their number reaches 48, the committee — also known as “the men in gray suits” — can demand a vote of all 315 Conservative members of Parliament. If she doesn’t win half the votes, she will be forced to resign.

This is the way political death comes in Britain, speedily and stealthily.

On Friday, because no one knew how many letters were in, the 24-hour news cycle gave itself over to innuendo, whisper, rumor and speculation about an arcane procedure few Britons understand.

Was it true, as one lawmaker alleged, that Mr. Brady already had 48 letters but was hiding them? Or, alternatively, that the rebels had initiated the process prematurely, and would not reach the threshold of 48? At a news conference, one of the hosts of the “Today” show jokingly asked the leader of the rebellion whether he was a “pinstriped assassin,” only to be corrected on the matter of pinstripes.

“Westminster is a place that loves intrigue,” said Tony Travers, director of the Institute of Public Affairs at the London School of Economics. “It’s in the nature of British politics to be full of gossip and conspiracy and plotting; they just love it. It attracts people who like that kind of thing. At the best of times, British politics is full of ‘who is up, who is down.’ This is not unique.”

Britain’s Conservative Party is one of the world’s oldest. In past centuries the parties were managed more like clubs, with leaders emerging though vague, informal consultations known as “soundings.” With no term limits, those leaders commanded expansive top-down power, and the 1922 mechanism was added to grant some power — and anonymity — to backbench members too outgunned to challenge them openly.

The historian John Ramsden once described the Tory Party as “an autocracy tempered by assassination.” And political assassinations have come regularly, if not frequently. Winston Churchill spoke approvingly of this mechanism, saying the party leader “must be sustained, he must be supported when he stumbles, he must not be awoken if he sleeps, but if he is no good, he must be poleaxed.” 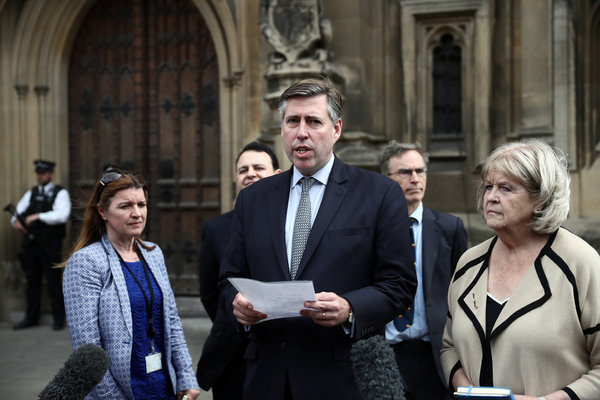 “Without some arrangements of this sort, deeply unpopular leaders will stagger from disaster to disaster, and the M.P.s will have no means of dealing with it,” said Alistair Lexden, the official historian of the Conservative Party, referring to members of Parliament.

In this case, of course, an abrupt leadership change could have global impact, throwing troubled negotiations over Britain’s withdrawal from the European Union into further uncertainty.

Already, the deal Mrs. May struck with negotiators in Brussels faces the daunting hurdle of approval by a majority of the Parliament in mid-December. In the absence of any agreement, Britain will face a “no deal” exit on March 29, risking shortages of food and medicine, steep price rises and a range of other economic shocks.

Those campaigning to remove Mrs. May — led by the very tall, very thin Conservative lawmaker Jacob Rees-Mogg — contend that a “no deal” outcome is preferable to the deal she has negotiated.

“At least we will be out and we will have the opportunity to go our own way to make our own decisions,” said Mr. Rees-Mogg, who was the first to publish his letter of no-confidence. “Leaving without a withdrawal agreement is not the end of the world. It’s preferable to being in purgatory forever.”

If Mrs. May feels queasy about the 1922 Committee, she’s in good company.

Margaret Thatcher survived a no-confidence vote in 1989, but her aura of invincibility was punctured by the ordeal, and she withdrew from a new challenge under pressure from party leaders the following year.

“You might lose, but even if you don’t lose, the idea that the people you lead are intriguing against you is uncomfortable when it comes to a head, and it’s inevitable you would feel some resentment,” said Charles Moore, a former editor of The Daily Telegraph, who is completing the third volume of an authorized biography of Mrs. Thatcher.

Mrs. Thatcher, he said, “would get that sense of getting betrayed. She famously said, ‘Treachery with a smile on its face.’ ”

In that case, too, the challenge unfolded dramatically, on television. It stirred sympathy in some Britons, Mr. Moore said, while also driving home the point that she would not remain in place much longer.

“There was a particular feeling that people were picking on a woman,” he said. “Because she was a woman, she wasn’t part of a gang that could back her up.”

This is a weak point with Mrs. May, a reserved person who, as she rose through the political system, avoided the boozy social clubs of Westminster for quiet nights at home with her husband. Mr. Lexden, the Tory party historian, said leaders should cultivate wide-ranging friendships in Parliament, in part to insulate themselves from such a danger.

“Any leader who knows that letters are going in is well advised to make themselves more popular,” he said. “May has not found a way to make herself more popular. She has many problems, of which this is one.”

The lawmakers challenging Mrs. May are also taking a risk. Britain’s parties still put a heavy premium on loyalty, so their act will stamp them as traitors. More important, they may forfeit their chance to replace her if they get the timing wrong, because party rules allow a leadership challenge only once a year.

“I’m struggling to understand why they think this is a more auspicious time than other times,” said Rory Stewart, a Tory lawmaker and an ally of Mrs. May, wondering aloud whether they would muster 48 letters.

“If these guys announce that they are speaking for the party, and they’re going to take down the prime minister, and they can’t get 15 percent of M.P.s to send in letters, then their legitimacy and authority begins to look a little threadbare,” he said. “They must believe they are close to that number or they wouldn’t have triggered it.”

The process of sending letters took on a certain theatricality this past week, with some members tweeting out scanned copies and photographs. In one, a creamy, card-stock envelope perched forebodingly on a computer keyboard. On Saturday morning, when it seemed the unfolding coup had paused for the weekend, around two dozen lawmakers had made their letters public.

But only one man knew the real number. Few figures in the country were more discussed than Mr. Brady, the chairman of the 1922 Committee, who is entrusted with receiving and counting the number of no-confidence letters. Mr. Brady offered no public comment on Friday, but at the most recent Conservative conference, he said public estimates of the number of letters in his office tended to be far off-base.

“The distance between what some of my colleagues say they might have done and what they actually have done can be considerable,” he said, according to The Guardian.

Cheryl Gillan, the committee’s vice chairwoman, said in written answers to questions that in most cases members of Parliament hand-deliver them to Mr. Brady. When the number of letters reaches 48, he will first inform Mrs. May and then begin arrangements for a partywide vote.

Ms. Gillan added that she had no idea where they were, or how many had arrived.

“Only Sir Graham knows the number of letters,” she said, “and he is a man of great integrity.”