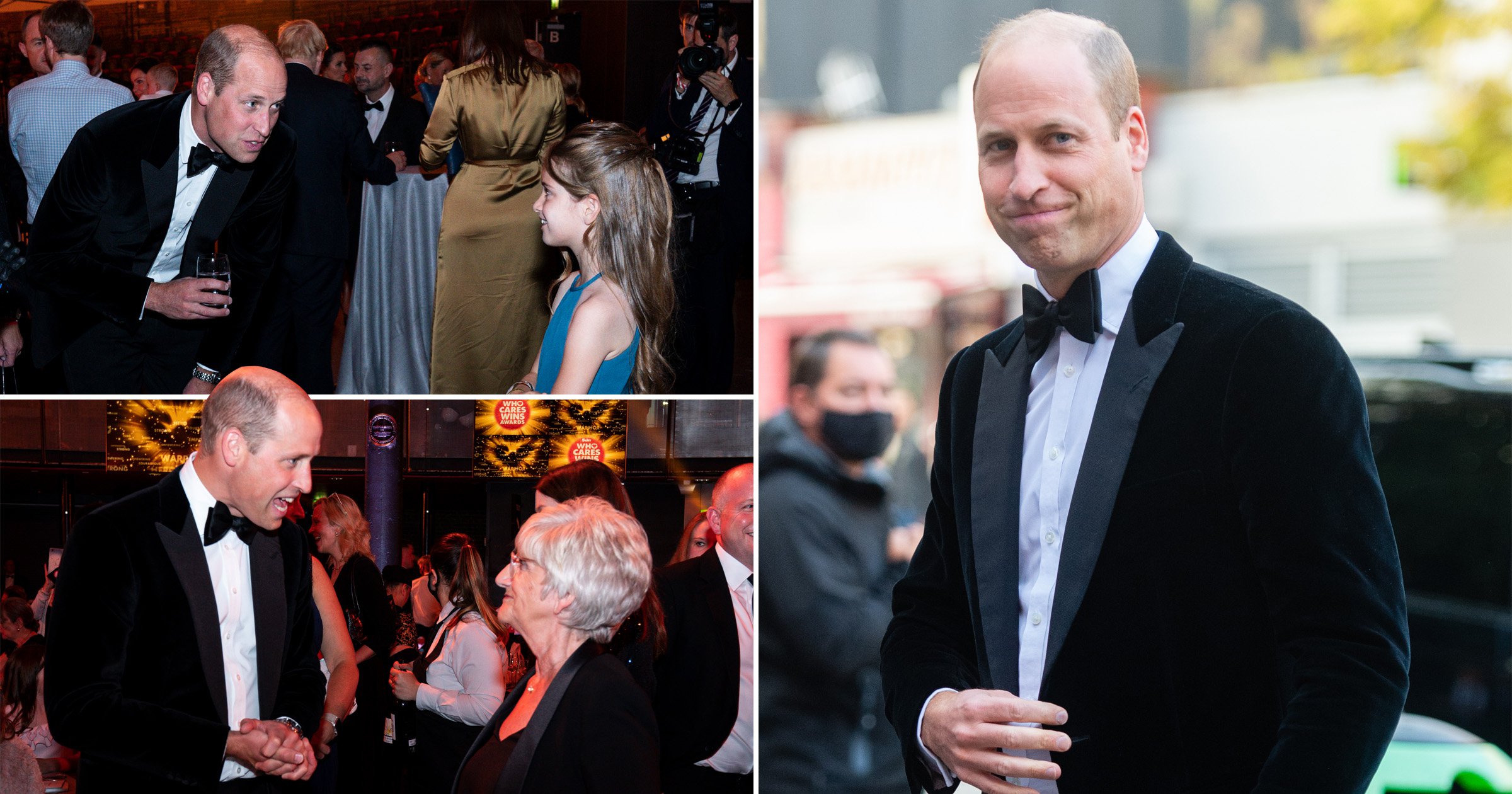 Prince William met some of the UK’s bravest emergency responders and most skilled medics and scientists at the Who Cares Wins Awards.

The Duke of Cambridge heard tales of medical marvels, fearless children and an air ambulance forced to resuscitate a donkey at the event in north London, hosted by the Sun.

He hailed emergency services heroes who ‘run straight towards the danger’ to save the lives of others.

In a speech, William, himself a former air ambulance pilot, said: ‘Every day our emergency services deal with high-pressured, challenging situations.

‘When most of us would, quite naturally, turn away and seek safety, our emergency responders rise to the occasion – running straight towards the danger to provide vital and often life-saving support.

‘Very modestly, they will tell you that this does not make them heroes and it is all done in the name of duty.

‘But sometimes a situation will occur that tests the resolve of even the most experienced responder.’

The duke continued: ‘In times like these, they must face their deepest fears and find the most astonishing level of courage to overcome the obstacles in front of them. And that is truly heroic.

‘The winners of this award faced just such a situation, but I am delighted to say they survived and are here this evening.’

William presented the ‘999 heroes’ award to Deena Evans and Michael Hipgrave, who were stabbed on duty as paramedics during a routine call-out.

Ms Evans, a 40-year-old mother-of-three, was stabbed twice in the chest, before Mr Hipgrave – who stepped forward to protect her – was stabbed in the back.

Both have now returned to work on the front line while their attacker has been jailed for nine years after admitting two charges of wounding with intent to cause grievous bodily harm.

The evening was presented by Davina McCall and Prime Minister Boris Johnson and footballer David Beckham were among the guests.

The team was recognised for the ‘nerve-shredding’ rescue of Highlands walker Duncan Stevenson, who ‘died seven times’ while flying through a snow storm to hospital.

Capt Rose and his wife Mandy revealed they had successfully resuscitated a donkey with a defibrillator after it got too close to a helicopter landing, prompting the duke to joke: ‘No mouth to mouth though?’

Elsewhere, one of the youngest nominees was Lucas Palmer, eight, who saved his four-year-old brother Louis’ life by diving into a freezing cold river to help him after he fell in.

Also nominated was Professor Keyoumars Ashkan, from King’s College Hospital, who operated on a violinist who played throughout her brain surgery to ensure her brain was not damaged during the procedure.

The duke said: ‘Did you make sure she played a calm and quiet piece?’

He mimed wild violin playing, adding: ‘Not something fast otherwise you’d have your hands going around.’

William also spoke with Joel Gibbard and Samantha Payne, founders of Open Bionics, which created the ‘Hero Arm’ – a lightweight and affordable prosthesis for below-elbow amputees.

The arm now comes in a range of Disney colours for children.

One attendee, nine-year-old Phoebe Sinclair, showed him her high-tech robotic arm, smiling as he asked: ‘Do your friends think it’s so cool?’

Members of the Oxford Covid-19 vaccine team received a nomination for the ‘groundbreaking pioneer or discovering team’.

William said he had been impressed to see the UK ‘punching above its weight’ in research, adding: ‘In all these areas, the world is watching us now.’

She was drafted in to help South Coast Ambulance Service (SCAS) when they reached a crisis point during the pandemic, mobilising 12,000 military personnel to help drive ambulances, work in control rooms and answer 999 calls.

The Duke bonded with her and husband Major James Allen over his own inability to find his way around an ambulance, despite his experience as a first responder.