The Duke and Duchess of Sussex’s unofficial biographer, Omid Scobie, posted a clip of the four royals together over the weekend.

He tweeted that a Buckingham Palace spokesperson confirmed Prince William “invited the Duke and Duchess of Sussex to join him and the Princess of Wales earlier”.

The visit, and display of unity between the two couples, is thought to have taken the crowd by surprise as they emerged from their vehicle on Saturday.

The two couples were solemn and dressed in black at the Windsor walkabout in front of the gathered royal mourners at the royal estate. 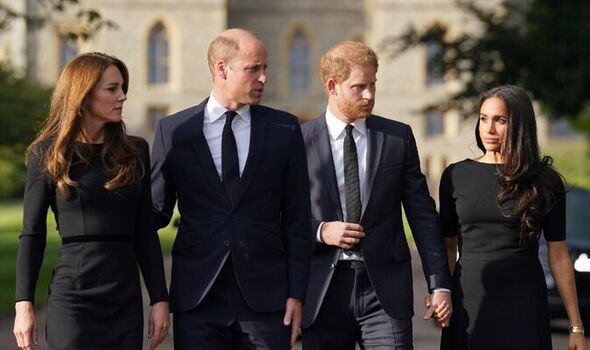 Prince Harry, 37, and Meghan, 41, stood alongside Prince William and Kate, 40, as they viewed flowers and other tributes at the gates of the residence.

Under the name @PamRanberg, another royal watcher wrote: “Notice with the hand gesture that Will at least tried to give the appearance to include Meghan.”

The account @LunaSpencer16 added that it “actually brought a tear to my eye” to see the “Fab Four” reunited. 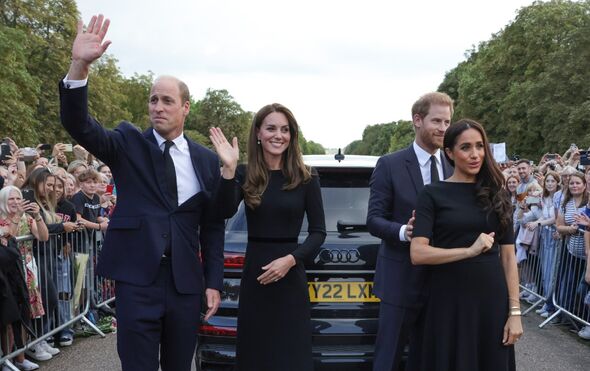 “And it jumps out at you how poor Meghan is trying to not do the slightest thing which will prompt nasty headlines.”

The Prince of Wales and the Duke of Sussex issued separate statements in memory and tribute to their late grandmother and Britain’s longest-reigning monarch.

Prince William described his feeling of being “incredibly grateful” to have had “the benefit of the Queen’s wisdom and reassurance into my fifth decade”. 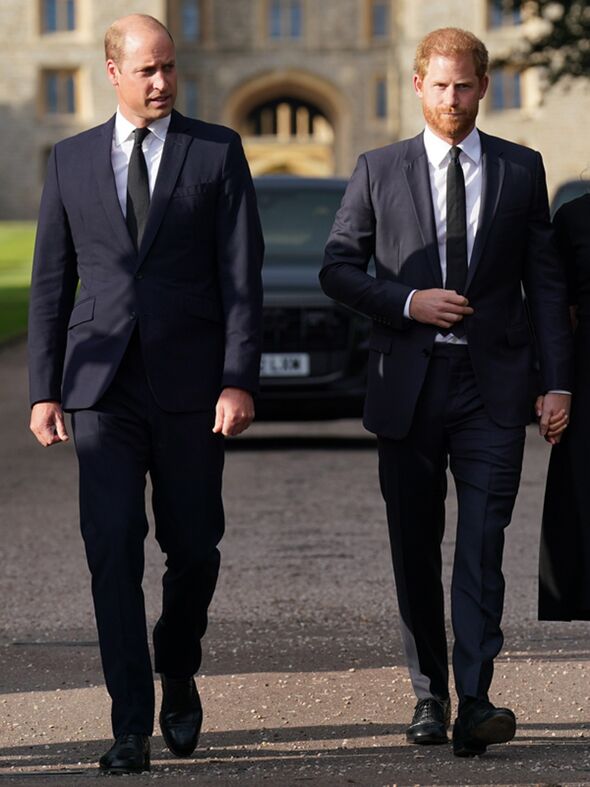 He described the late monarch as an “extraordinary leader”, with an “absolute” commitment to “the country, the Realms, and the Commonwealth”.

He added that Kate, Princess of Wales, “has had 20 years of her guidance and support”, and that the late Queen had made an indelible impression on the couple’s three children.

He wrote in a statement: “My three children have got to spend holidays with her and create memories that will last their whole lives.”

“I knew this day would come, but it will be some time before the reality of life without Grannie will truly feel real.

“I thank her for the kindness she showed my family and me. And I thank her on behalf of my generation for providing an example of service and dignity in public life that was from a different age, but always relevant to us all.”

He then referenced the new monarch, King Charles III, and his commitment to the continued future of the Firm.

He said: “I will honour her memory by supporting my father, The King, in every way I can.”

He described his grandmother’s “unwavering grace and dignity”, adding he would always “cherish these times shared with you, and the many other special moments in between”.