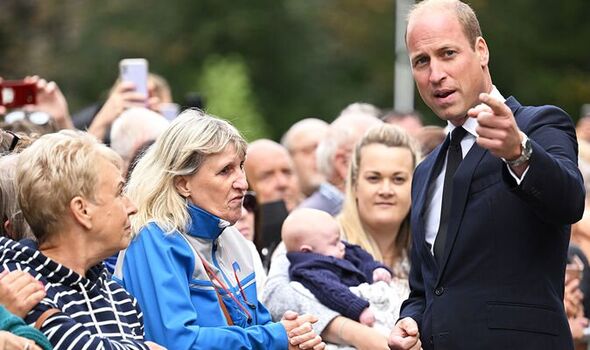 Prince William has revealed joining the solemn procession as his late grandmother made her final journey from Buckingham Palace on Wednesday brought back memories of walking behind his beloved mother’s coffin in 1997, aged 15. Roya Nikkhah, Sunday Times royal editor, tweeted: “The Prince of Wales has said walking in the #Queen’s cortège yesterday brought back memories of walking behind his mother’s coffin for Diana’s funeral procession in 1997 when William was 15, while viewing tributes to #QueenElizabethII in Sandringham with the Princess of Wales.”

Princes William and Harry walked side by side behind their grandmother Queen Elizabeth’s coffin on Wednesday.

The scenes were reminiscent of when William, now the Prince of Wales, and his brother Harry had walked behind the coffin of their mother Diana, Princess of Wales during her funeral in 1997.

The Duke of Sussex later said of the moment: “I don’t think any child should be asked to do that.”

The brothers, whose relationship has become strained in recent years, took part in solemn procession from Buckingham Palace to Westminster Hall, where the queen’s body will lie in state for four days until her funeral on Monday.

Their father King Charles was just in front of them with the late Queen’s other children. Charles’s wife Camilla, the Queen Consort, William’s wife Kate, Princess of Wales, and Harry’s wife Meghan, Duchess of Sussex, travelled to the hall by car.

In 1997, after Diana was killed aged 36 in a car crash in Paris, William and Harry, aged 15 and 12, walked through central London in her funeral cortege, one of the defining images of their lives.

The Prince of Wales’ heartbreaking admission comes as he arrived at the main gates to Sandringham House in Norfolk to view floral tributes to the Queen with his wife Kate.

Thousands of well-wishers turned out to see William and Kate look at the sea of flowers left for the late monarch by the Norwich Gates.