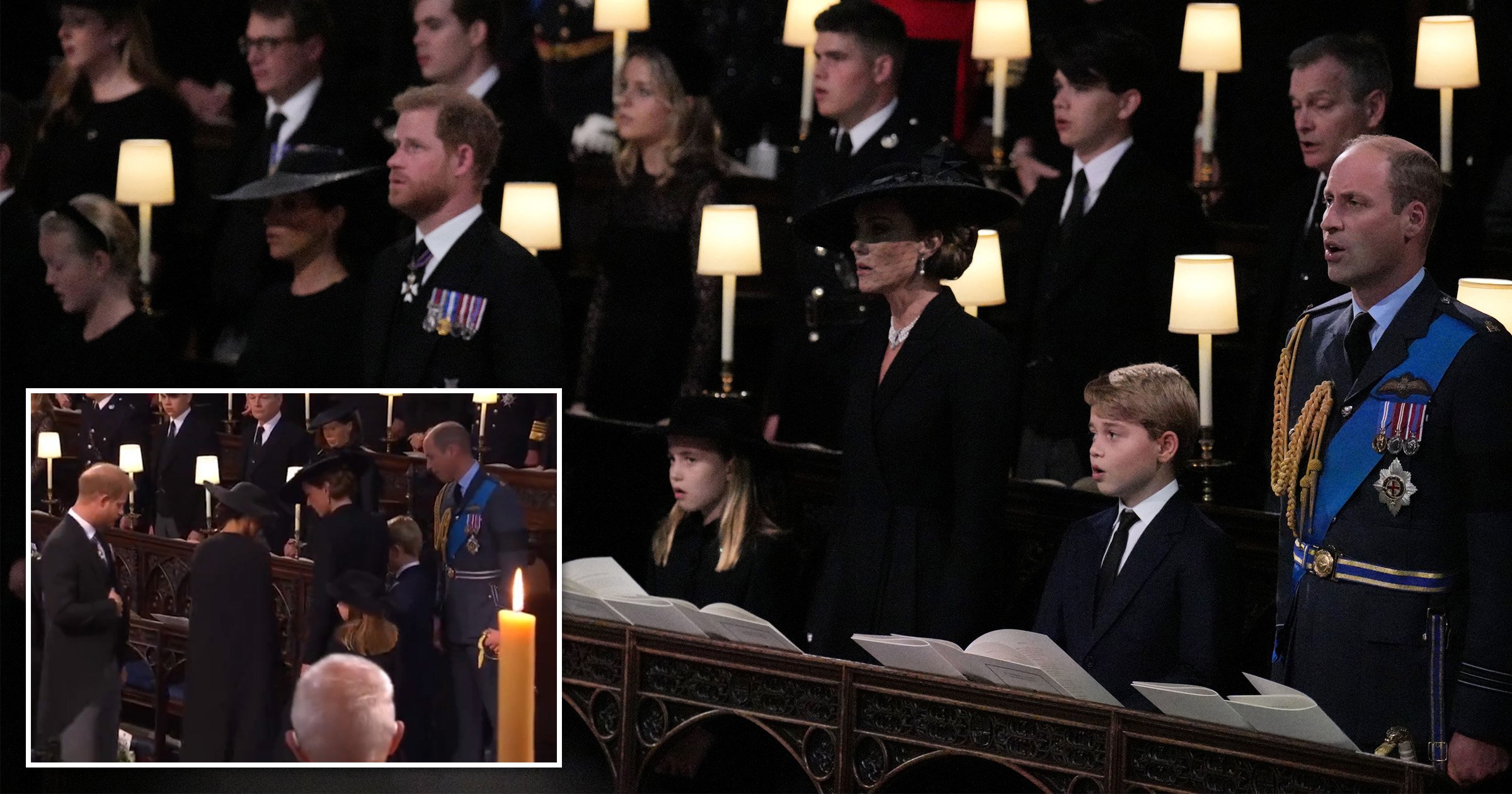 Prince William was seen ushering Prince Harry and Meghan Markle to their seats ahead of the Queen’s committal service at Windsor Castle on Monday.

The Prince of Wales, 40, led his family to their places as part of a congregation of 800 mourners gathered ahead of the monarch being laid to rest.

He was immediately followed by Prince George but reminded the nine-year-old to wait before entering the aisles so that his uncle and aunt could take their places.

George, his mum Kate, Princess of Wales, and sister Charlotte then waited as his dad gestured for Harry and Meghan to walk ahead of them into the front row.

It is thought to have been the only interaction between the brothers seen in public on Monday, when they also walked side-by-side during parts of the processions behind the Queen’s coffin.

No eye contact between the pair was observed as they followed their grandmother from Westminster Hall to Westminster Abbey and later at Windsor Castle.

Only the pew and a few feet of space separated them from the coffin during the hour-long service at St George’s Chapel.

After mourners joined in the before-lasthymn, the Imperial State Crown, the orb and the sceptre were moved from atop the coffin to the altar.

Charles then laid the Queen’s Company Camp Colour of the Grenadier Guards in their place before the Lord Chamberlain broke his Wand of Office and set it beside the Colour.

After a final psalm by the Dean of Windsor, the solemn ceremony ended with the lowering of the casket into the Royal Vault beneath the chapel, where Prince Philip had been laid to rest.

Later that evening, both the Queen and her husband were laid to rest beneath the King George VI Memorial Chapel following a private service for members of the royal family.

As the Queen did when she buried her own father in 1952, King Charles is believed to have placed a handful of earth on to her coffin in front of loved ones including Princess Anne, Prince Andrew, Prince Edward, Prince William and Harry.

The intimate ceremony stood in stark contrast to the monarch’s state funeral, believed to be the most widely watched ceremony of its kind in history.

The memorial chapel, an annexe of St George’s Chapel, is also the burial place of her father, King George VI, her mother Elizabeth Bowes-Lyon, and sister Princess Margaret.