CASTELLINA IN CHIANTI, Italy — For decades, the rolling hills of Chianti in Tuscany have been a holiday destination for tourists from all over the world. Nearly year round, visitors take on the region’s winding roads in their rental cars, admiring the landscape laboriously sculpted by farmers, where vineyards blend into olive groves, and forests of oak trees give way to cypress-lined drives.

For me, this is home.

I remember strolling through the streets as a young girl in the summers, surrounded by northern European visitors. My first job was at a local tourism office, where I helped travelers with their assorted accents look for paper maps of the area. Hotels filled up quickly in those days.

More than 114,000 tourists passed through my village in 2019, and the number was even higher in previous years.

But the pandemic — which has unsettled the globe and taken more than 75,000 lives in Italy alone — has brought tourism to a halt across the country and in my village, Castellina in Chianti, a hamlet of 2,800. This year, foreigners, who usually would be sipping espressos on the local bar’s terrace or grocery shopping at the farmers’ market, are nowhere to be seen. And without them, the town seems to have slid back in time. 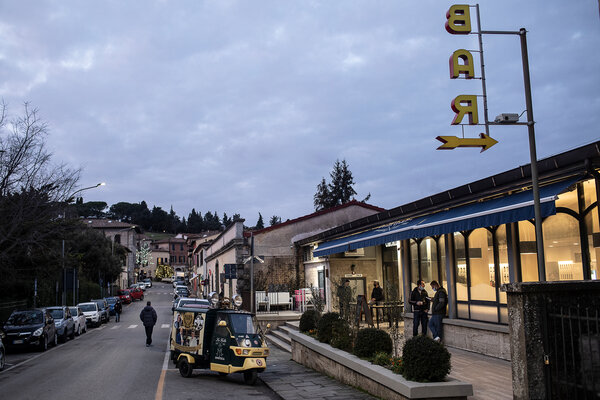 Decades ago, villagers needing medical advice, paperwork for health services and even some routine procedures like blood tests often turned to the local pharmacy, which sits on the ruins of the town’s late Medieval gateway, just across from the church on the cobblestone main street. Over time, though, national policies required the town’s health office to expand its services, so people went there instead.

But local authorities closed the health office in March because of the coronavirus, and residents again found themselves relying on the pharmacy for basic health care and routine tests.

“People came to us like they used to decades ago,” said Alessio Berti, 68, who has run the pharmacy for the past 46 years.

In the first wave of the pandemic last spring, villagers lined up in front of the pharmacy every day to hunt for vitamin supplements and face masks, he said. The four pharmacists — all members of the same family — worked long shifts and spent hours at the computer trying to help residents with paperwork. The shop became a communal clinic, the access point to online health services and an impromptu emergency room.

“They are well organized,” said Sonia Baldesi, a 67-year-old retiree who joked that she was old enough to remember when Mr. Berti started working as the town’s pharmacist. “They offer small services that allow us to skip a trip to Siena, and that’s not a small thing these days.”

It’s a personal touch that is characteristic of the town. Masked, people greet each other on Castellina’s street, even if they aren’t sure to whom they are speaking.

“Residents all know each other and help each other if they can,” said Roberto Barbieri, 52, who manages the village’s Coop supermarket.

Castellina was not hit hard by the coronavirus in the spring, but clusters emerged in town by the fall. The virus was the topic of conversation on the street or at the supermarket, as relatives of people who tested positive hoped their loved ones would be spared.

So far, only one Castellina resident has died from the coronavirus, in November.

“This time, it’s close to home,” said Claire Cappelletti, the 62-year-old co-owner of a leather goods store in town that has been in her husband’s family for more than a century.

Like other business owners who depend on the tourist season, the Cappellettis have had a disastrous year. When the nationwide lockdown was imposed in March, they were preparing for the start of the tourism season. But until restrictions were loosened in June, they could not sell a single item — from a handmade leather bag to colorful loafers.

They installed hand sanitizers and kept the wooden shop doors wide open for better ventilation, but the first few Europeans who ventured to Castellina did not arrive until late July. The usual throng of Canadians, Americans and Australians never showed up.

Many tourists and some locals, however, were pleasantly surprised to find the village free of crowds. The summer was reminiscent of the late 1990s, before the buses loaded with tourists started arriving in Chianti.

Nostalgia, though, is not good for sales. Ms. Cappelletti said her shop’s revenues were down 80 percent since the pandemic started, a figure mirrored throughout the village. But by working round the clock, and keeping expenses low, the family has kept the business afloat.

They also opened an online store. Their usual clients — some longtime Chianti visitors — started ordering goods from across the ocean, some just to help the Cappellettis get through this year.

“We now have great-grandchildren of our first customers,” said Claire’s daughter, Nicole Cappelletti, 32, while gently polishing a bright red woman’s purse. “Our customer base saved us.”

Castellina is particularly well-known for its olive groves and vineyards of Chianti Classico grapes — a popular attraction for foreign tourists. But this year, in August, those spots were “full of Italians who traveled with their own cars and stayed a few days,” said Martina Viti, 34, the manager of the Agriturismo Rocca, a small family-run farm overlooking the valley under Castellina.

Foreigners tend to stay longer, she said — and spend more.

“Italians have less interest in tasting wines and olive oil made by our small farm,” she said. “So this year, we mostly rented our apartments with the pool.”

For others in the village, the year was not so terrible.

“We were shut for a good part of the year, but when the restaurant opened, Italians and some foreigners who own property here came and did not skimp on food or wine,” said Giuseppe Stiaccini, co-owner of the town’s oldest restaurant, La Torre. It opened in 1922 and served as a cafeteria for Allied troops during World War II.

The local supermarket has also seen a boom in a year of busts.

Tommaso Marrocchesi Marzi, co-owner of the Bibbiano wine estate and president of the local association of organic producers, said that even though he expected to see a 20 percent decline in sales this year, he is hopeful for the future as the Asian and United States markets start to pick up.

Mr. Marrocchesi Marzi remembered that until the 1990s, people from Rome, Milan and other European cities competed to buy properties in Chianti because of its services, natural beauty and boundless space for contemplation.

“Our countryside, like our wines, is not a commodity,” he said. “It’s a status symbol, a way of living. To create the future, we need thinkers.”

But, he admitted, “to attract thinkers now we’d need a speedy internet connection.”

Some locals — exasperated by the town’s slow internet service as they tried to work remotely — hope that is one good thing that the pandemic will bring: faster internet.

Recently, workers were digging a hole on the provincial road crossing the town where eventually fiber-optic cables for faster connections will be buried. A crowd of residents gathered to watch — with hope.