The moment a frustrated WizzAir pilot got angry with passengers over the tannoy on the runway of Gatwick Airport has been captured on camera.

Tourists were exhausted after reportedly being delayed for seven hours while waiting to depart for Larnaca in Cyprus.

Passenger Hannah Mace recorded the pilot’s outburst and uploaded the video to TikTok.

The WizzAir pilot was heard saying: ‘Show of hands please, who wants to get off?

‘We won’t be going tonight if you get off. You know, I don’t need this, the crew doesn’t need this.

‘We’re doing everything we can. If you want to get off, I’ll let you off, no problem.’

But several TikTok users sympathised with the pilot. 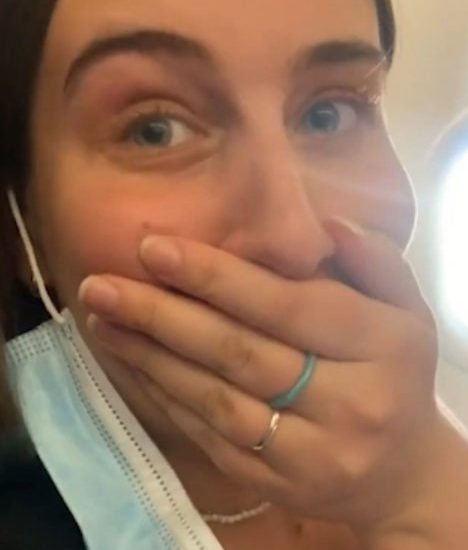 One person commented: ‘Oh bless him though. You can hear the pain in his voice.

‘He wanted to get going as much as everyone else, must be hard to have everyone moaning at you.’

Another said: ‘To be fair, I’m on his side. He’s probably extremely stressed and the crew are exhausted.’

A WizzAir spokesperson said: ‘Wizz Air sincerely apologises for the inconvenience caused by the delayed flight W95749, from Gatwick to Larnaca.

‘This was initially a result of a late inbound aircraft, with further delays caused by Air Traffic Control issues at London Gatwick.

‘Wizz Air has contacted affected customers directly to inform them about their rights.’

Just two weeks ago a pair of drunken Brits were filmed punching fellow passengers on a plane – including the pilot – after being on a bender for eight hours.

Two men in their early 30s, from Bermondsey in south London, were allegedly being ‘abusive and loud’ and had been bragging about drinking in the airport since 10am that morning.

They caused so much chaos the plane was eventually cancelled.