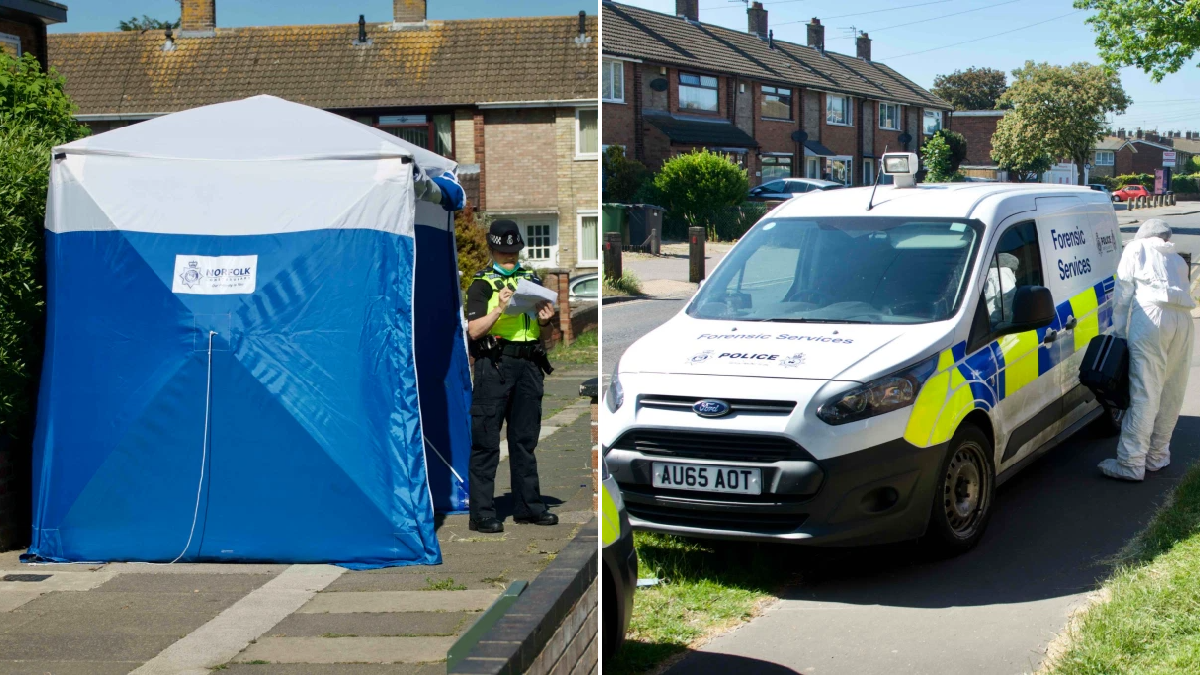 A pensioner was found with fatal neck injuries at home as a fire ripped through the property.

The body of Linda Hood, 68, was discovered inside her home in Gorlestone-On-Sea, Norfolk, by firefighters tackling the blaze on Friday morning.

The 4ft 10inch tall pensioner, nicknamed ‘Little Linda’, was found inside and pronounced dead at the scene.

A post-mortem examination found that she had died from compression to her neck.

Forensic officers were seen searching her two-bedroom terrace home in Cherwell Way for clues, as a murder investigation was launched.

Neighbours raised the alarm just after 9am after they opened her front door and realised that her home was full of smoke.

One said: ‘Her next door neighbour’s daughter came round to visit her mum and heard the sound of Linda’s smoke alarm going off.

‘She ended up knocking on my door because I have her spare key due to her having locked herself out in the past.

‘I opened the door and there was a lot of smoke. I don’t know how long the fire had been going for. We called the fire brigade and they told us not to go inside.

‘The firefighters were here in a few minutes and sadly she was dead.’

Another neighbour in an adjoining house reported seeing ‘a mist’ and a smell of burning in her bedroom when she woke up.

Floral tributes were left outside the pensioner’s home, with one reading: ‘So sad to lose you Linda’ and another added: ‘Missing a lovely neighbour.’

One neighbour said: ‘She was a lovely lady and would always say hello to everyone.

‘She used to have a job delivering free newspapers all over the town and carried on doing that until a couple of years ago when she had to give up because she had problems with her legs.

‘We used to see her pulling round her little shopping trolley stuffed with papers. Even when she had mobility problems, she would be limping along. She was such a hard worker.

‘She had lived in her house for around 40 years and everyone around here knew her. I can’t imagine what has happened and why anyone would want to harm her. It is just awful.

‘Her husband Alan died around five years and they did not have any children. The only close relatives she had were a brother in London and her husband’s sister.’

Detective Inspector Lewis Craske said: ‘This is a tragic incident and my thoughts remain with her friends and family at this awful time.

‘We continue to work alongside specialist investigators to establish the exact circumstances leading up to the fire and we are keen to speak with anyone who may be able to assist us with our enquiries.’

‘We want to understand who Linda was and would like to hear from all those who knew her,’ he added.

Officers are particularly keen to speak to anyone who was in the vicinity of Cherwell Way on June 10 and 11 before the fire.