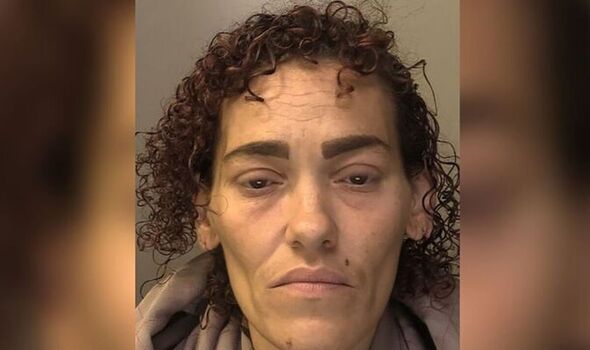 A pensioner was violently beaten on his own driveway by a drug addict – but he got arrested by police.

The 74-year-old victim said he was “let down by the people who are supposed to protect us” after he was detained for assault. A court heard his assailant, Renee Weaver, had lied to officers, claiming she was a sex worker and he had attacked her after refusing to pay up for a sex act.

But in fact, Weaver, 41, jumped into the grandfather’s car, punched him, swiped cash and his phone from his pockets, and threatened to smash his head in with a glass bottle.

Weaver was eventually arrested and initially charged with robbery in January this year. Since then, her victim has suffered a stroke.

But Weaver was jailed for 10 months yesterday, Liverpool Echo reports.

Sentencing the thug at Liverpool Crown Court, Judge Anil Murray said: “You have got a long-term drug problem. You have told me you want to sort it out, I hope you do because you will just face longer and longer sentences.”

The defendant had already offered to plead guilty to theft, assault and possession of heroin, which carry significantly lower sentences than robbery, but the Crown Prosecution Service (CPS) did not accept those offers.

However, after the stroke, the victim was too unwell to give evidence in court and agreed when consulted by the CPS that accepting guilty pleas to the lesser offences was for the best.

The attack happened as the pensioner got in his car in Kensington, Liverpool, to collect his grandchildren.

Sarah Griffin, prosecuting, said: “[The victim] was in his car on his way to collect his grandchildren and as he was reversing off his driveway, the defendant got into the passenger seat. He stated that he did not know the defendant’s name, but he recognised her as one of the women he had seen standing on Sheil Road.

“He asked her ‘What do you want?’ to which she replied ‘You know what I want, I’ve got no money’. She started going through his glove box.

“As he has mobility issues he would have struggled to get out of the car so he started to drive to the police station. The defendant pulled the handbrake on to prevent him from driving any further.

“[The victim] attempted to call the police. When the defendant realised what he was doing she punched him to the side of the face three times causing tenderness and pain.”

The court heard after assaulting the terrified grandad, Weaver shouted: “I’m going to call the police and tell them you’ve made me give you [a sex act].” She then snatched his phone and grabbed a £5 note from his jacket pocket, before threatening to “smash his head in” with a glass bottle.

The police were called and found Weaver with the pensioner’s phone. She was crying and falsely claimed she had “provided sexual favours” to the victim and that he had underpaid her and assaulted her.

Based on those claims the pensioner was handcuffed and put into the back of a police car, before the truth emerged. Weaver was then arrested and interviewed, where she stuck to her story for a short time before claiming she could not remember events clearly due to being drunk and on drugs.

Ms Griffin also read a harrowing victim personal statement, written before the stroke, in which the mounting pressure caused by the case was clear. He wrote: “The area I live in for most of my life has now become an area for sex workers to ply their trade. I have always been an early riser as I am a retired fruit and vegetable retailer, but I now find myself worrying prior to leaving my home and looking over my shoulder all of the time before getting into my car and now locking the doors.

“I have had bouts of anxiety prior to going out and increased stress worrying about whether either me, my family or my home may be attacked or targeted as the female responsible knows where I live and made threats. I have as a result ended up in hospital due to panic and anxiety in recent weeks and I am now under observation via medical consultants at the Royal University Hospital Liverpool.”

The court heard Weaver had an “unenviable record” of 15 convictions for 25 offences, including for stealing from an elderly man who relied on two walking sticks and spitting in a police officer’s mouth.

John Rowan, defending, told the court his client had asked to be sent to prison as she was “simply unable” to comply with the requirements of a suspended sentence order.

He said: “The main problem in her adult life has been her addiction to Class A drugs. Class A drugs have had a massive impact on Miss Weaver both in terms of her mental health and in relation to her physical health.

“There have been times when she has been able to address her drug use and come off drugs, but those have been for a short time.”

Mr Rowan said Weaver had been diagnosed with emotional unstable personality disorder (EUPD) and felt going to custody would be a “break from life in the city” and her constant struggles with accommodation and drug use.