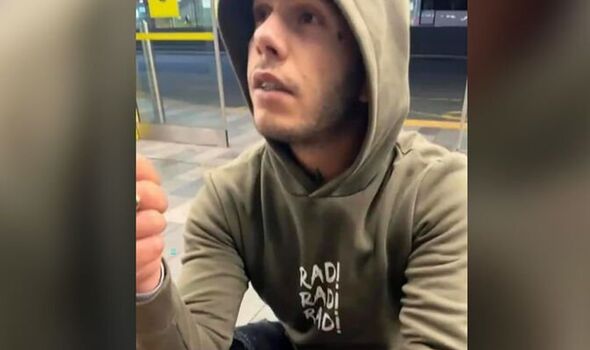 Ahmed Al-Razawe, 24, carried out three sex attacks in the space of just four days last autumn, targeting two teenage friends sitting at a bus stop. A court heard the creep asked them for sex and groping their thighs, before smacking one young woman’s bottom. The Syrian national – who had entered the UK illegally and applied for asylum – bit her breast after she wrestled him to the ground in Liverpool city centre.

But the quick-thinking victims managed to take photos and videos of Al-Razawe on their mobile phones, and their friend chased Al-Razawe before landing a punch on his face.

The sex fiend was yesterday jailed for three years after admitting three counts of sexual assault and one count of assault causing actual bodily harm.

The victims, aged 17 and 18 at the time, posted the images and video on Facebook, to warn others and get the attacker identified in October last year, reports Liverpool Echo.

Al-Razawe was eventually identified by the man running the hostel in which he was staying in Toxteth, Liverpool.

But in the meantime, Al-Razawe had struck again – this time attacking another young woman in the city centre after he had been drinking.

Sentencing at Liverpool Crown Court, Judge Recorder Harris praised the victims’ bravery and the quick thinking of their friend.

He said Al-Razawe would have to sign on the Sex Offenders Register for a decade.

Speaking of the first incident, Henry Riding, prosecuting, said: “There was something of a struggle before he then ran off again. During that struggle however the friend punched the defendant in the face.

“The defendant suffered an injury causing him to bleed and some of his blood got on the friend’s clothing. As a result of which, it was matched to the defendant as a result of DNA analysis.”

The third victim and her two friends also managed to take photos of Al-Razawe, before he was picked out in an identity parade.

The 17-year-old victim told the court she was left struggling to sleep. In a victim statement, she said: “Every time I close my eyes I could see his face.” She added that she is now much more wary of people when she is out and that she was relieved neither her nor her friend had been on their own.”

The 18-year-old victim said she was left jumpy at the slightest noise, struggled to sleep, and woke up with a heavy feeling on her chest.

Mr Riding said: “She describes how she doesn’t want to get up or go out and relives what happened in her head over and over again.”

The third victim, in her 20s, had moved to Liverpool from a different area and described how she was left feeling uncomfortable in the city. She suffered nightmares, struggled to cope with social situations, and reacted negatively to men touching her in a friendly way.

Al-Razawe claimed drink and drugs played a part in both attacks and that he didn’t remember the first incident.