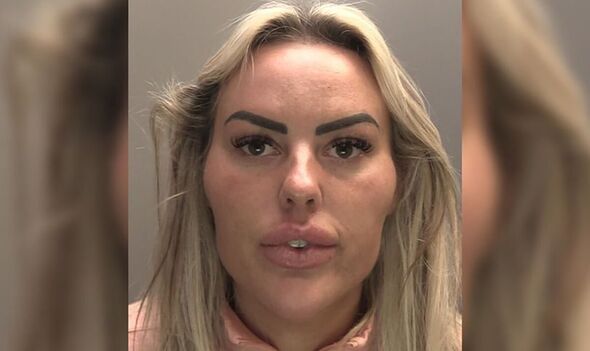 A healthcare assistant at a prison smuggled in ketamine for an inmate.

Megan Woodham, 30, sobbed “I love you” to family members as she was jailed for six years for the offence yesterday. A court heard she used her job to conceal the shipments of drugs and used her home as the “safehouse” for a wider ring involved in the supply of millions of pounds of cocaine.

Members of the operation were also handed lengthy spells behind bars at Liverpool Crown Court.

Woodham, who worked at HMP Risley in Warrington, Cheshire, concealed the ketamine and handed it to inmate Daniel Doran between December 2021 and February 2022.

David Watson, prosecuting, described how they – together with co-defendants Kelsey Higgins and John Butler – were also “involved in the supply of a very large quantity of high purity cocaine”.

The inmate had access to a mobile phone while behind bars and “organised the moving of cocaine from location to location” from his cell “under the noses of authorities”.

Woodham was said to have “formed some sort of relationship” with the Doran, 32, through her work and would “willingly assist him by allowing her home address to be used for the storage of parcels” of drugs, Liverpool Echo reports.

Higgins meanwhile was described as a close associate of Doran’s cousin Butler, who was arrested while travelling to his home in possession of 10kg of cocaine on January 8 last year. His Volkwagen Golf was stopped by police in Netherton, Merseyside, and heading in the direction of the Bootle area of the county.

Officers discovered a black bag in the passenger footwell which contained 10, 1kg packages of the class A drugs. These illicit substances had an estimated street value of up to a million pounds.

This seizure sparked an investigation by Merseyside Police, with Butler’s seized phone revealing his communications with co-conspirators. He was described as having been “used to carry out criminal tasks” by Doran.

The probe also uncovered a “separate agreement” between Woodham and Doran, in which she “agreed to assist him by taking delivery of packages of ketamine from his criminal associates”. She then smuggled these drugs into Risley prison, going undetected thanks to her job, and handed them over to the inmate.

Jurors were told that Doran texted Butler – who he “used to run errands” – on December 14 2021, supplying him with Woodham’s then home address in Wigan, Greater Manchester. His tasks included the collection of money and the transportation of drugs.

Five days later, Doran called 26-year-old Higgins in order to make arrangements for him to take delivery of the 10kg of cocaine. On January 2, he further messaged Butler to “sort a parcy” – a reference to a parcel of drugs.

Her main duties were carrying out blood tests for prisoners, but Doran was not due to receive one on the day in question. The camera footage showed Woodham approaching his cell before leaning into it, “in all likelihood, passing Doran a package of drugs”.

Both then “took a keen interest in the location of the prison officers immediate afterwards”. Doran said in a text a few days later that he had “been under the influence of drugs” since January 3 – “further suggestive he had had drugs delivered to him by Woodham, effectively using her job as a cover”.

Then, on January 5, Doran made contact with Butler asking him to make a delivery to Wigan. But his relative “said he couldn’t help”.

The same day, Butler and Higgins arranged to meet “at the back of a piri shop”. Messages sent between Woodham and Doran that evening “suggested she was carrying out an errand for him”, “in all likelihood collecting a package” on his behalf after being provided with a postcode in the West Derby area of Liverpool.

But she informed him shortly after 7pm that she had suffered two tyre blowouts while driving on the M58. Doran responded by offering to have the items delivered to her on the motorway where she was broken down, with the goods ultimate delivered to her home.

Butler exchanged phone calls with both Woodham and Butler shortly after 10.15pm, with cell siting data showing he had travelled to the Wigan area. After his departure, she messaged Doran to say “he’s been”.

The inmate responded: “Ok ha ha. See u tomoz, don’t forget wa ones to bring haha an the kenny.”

On January 6 and 7, Higgins and Butler were in contact via phone calls to “make arrangements” for drugs to be moved to the former on January 8. That day, Doran warned Woodham not to go ahead with her next delivery as “something has happened on the wing, a security issue” – with messages also referencing a “snitch”.

Around 1.30pm, Higgins – of Orrell Park, Liverpool, – made eight attempts to call Butler but none were answered as the latter had been arrested following the discovery of the drugs. Doran also made an attempt to ring the detainee later that day.

He then messaged Butler’s partner saying: “I feel like s*** mate. If I cud take is place I really would, I swear.”

But his arrangements with Woodham continued. On January 17, Doran messaged her asking if she has the “ket” ready to be picked up.

The following day, she informed him that she had been “excluded” from the jail after suspicions were raised over her behaviour. He messaged back to say “million per cent need to sort getting the s*** picked up”, which “showed that Doran had clearly arranged for drugs to be stored at Woodham’s address”.

A further text to her on January 20 read “need them bits nt assed about the dow they weren’t mine them parcys”. Doran, Higgins and Woodham were all arrested on Valentine’s Day last year and gave no comment under interview.

Brendan Carville, defending, told the court his client was “well respected in prison” and said: “He has ruined his life by drugs. He has been a drug addict all his life, and of course he has moved on the supply drugs.”

Plasterer Higgins’ 12 previous convictions for 20 offences include a prison term of 44 months, imposed in 2016 for conspiracy to supply heroin and crack cocaine. The dad-of-two, appearing via video link to HMP Altcourse, read a letter to the court in which he stated he had “done a favour” for Butler in return for £150 – claiming that he allowed a bag to be stored in the boot of his car for a matter of hours, and that he was unaware of its contents.

He said to the judge: “I have had time to reflect on my actions and I am truly sorry for this. I would not class myself as a drug dealer.

“I did not know what was in the bag. I thought it was ketamine. I feel I have brought shame on my family. I have brought this all on myself to make £150.

“I did not supply any drugs and I have not dealt any drugs for many years. I know the difference between wrong and right, and I could have said no.”

Appearing on Higgins’ behalf, Paul Becker added his client was a carer for his dad and said: “Of course, the defendant misses his children. He is very disappointed by his poor decisions.”

Woodham has no previous convictions. Carmel Wilde described the single mother to a 12-year-old girl as having a “caring nature”, saying in her mitigation: “She served as a healthcare assistant for some 12 years, including through the traumatic covid times.

“It has all been ruined now in a devastating way with very serious offences. Clearly her family and friends remain in shock.

“Ms Woodham took the job in Risley, but became easy prey to sophisticated criminals. She was in a position of trust, but I invite your honour to take into account her vulnerability to hardened criminals.”

Higgins was convicted of conspiracy to supply cocaine by a jury. He was handed 13-and-a-half years and similarly reacted by shaking his head before taking off his glasses, leaning back and smiling.

Woodham, now of Wigan, was found guilty of conspiracy to supply cocaine and ketamine. She burst into tears after being jailed for six years then turned to members of her family in the public gallery and said: “I love you.”

Butler, of Kirkby, Merseyside, was jailed for eight years in February last year. The 27-year-old admitted possession of cocaine with intent to supply.

Meanwhile, Doran’s mum Valerie Doran was found guilty of money laundering. The 54-year-old, also of Kirby, will be sentenced later this month.

Detective Sergeant Peter Sloan said following today’s sentencing: “We welcome this latest sentencing of Doran, Woodham and Higgins today – which highlights the fact that we will leave no stone unturned. This was a complex investigation which has developed from the arrest of Butler and a subsequent investigation resulted from that stop check.

“Organised crime is hugely damaging to our communities, often involving intimidation, violence and creating fear and it is these criminals who run county lines. Criminals involved in organised crime have no thought for anyone other than themselves, and their criminal intent and greed.

“I would ask anyone who has any information about who is supplying or selling drugs in their area to contact us so we can take action.”