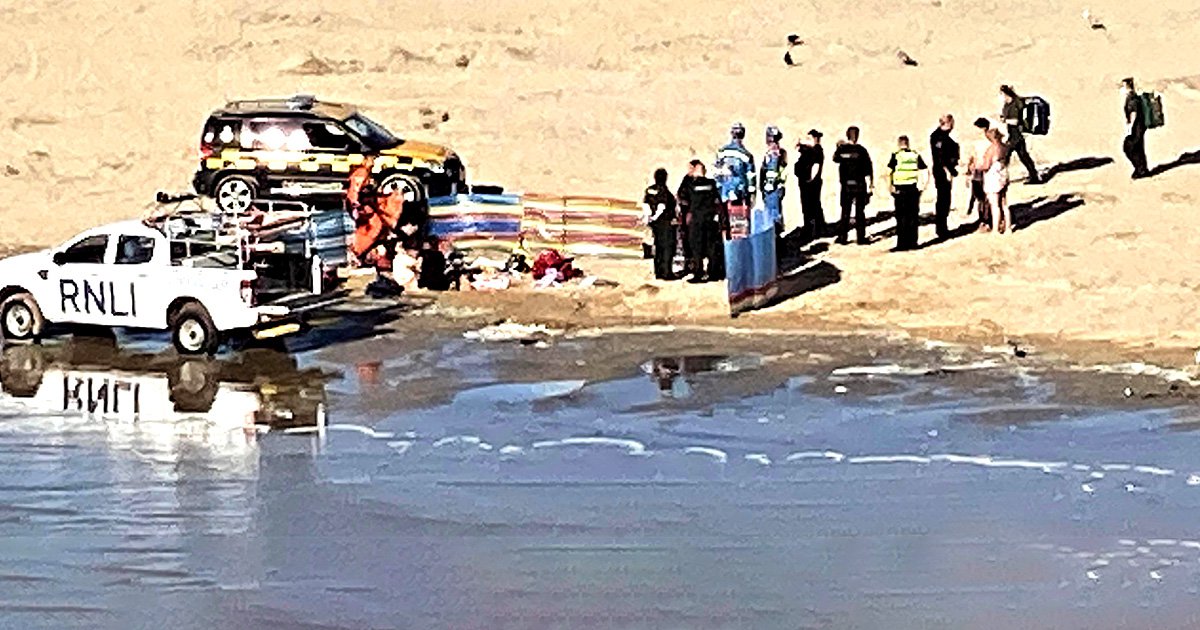 A young woman died despite being given CPR in front of thousands at a packed beauty spot beach after being dragged unconscious from rough seas by a team of rescuers.

The major rescue operation was launched around 4pm on Thursday after two people got into difficulty in ‘big seas’ at Perranporth, Cornwall.

They were reported to have been seen struggling after ‘rock jumping in the water’ at Droskyn Point.

One person got back to shore and attempts were made to resuscitate the second after they were rescued, the Maritime and Coastguard Agency (MCA) said.

An MCA spokesman said: ‘Around 4pm on Thursday HM Coastguard received a 999-call reporting two people in difficulty in the water at Droskyn, Perranporth.

‘RNLI Lifeguards from Perranporth and the coastguard rescue team from St Agnes were sent to help along with the coastguard helicopter from Newquay and the Air Ambulance.

‘One person self-recovered to shore.

‘A woman was recovered from the water by lifeguards.

‘CPR was given however they were declared deceased by a paramedic at the incident.’

A spokesman for Perranporth Surf Life Saving Club said their members were involved.

They said: ‘Our thoughts are with the family of the young lady who tragically lost her life in big sea off Droskyn Steps.

‘Several of our young people working as RNLI professional lifeguards and HM Coastguard were involved with the incident with HEMS, Ambulance and Devon and Cornwall Police working incredibly hard to save a life in trying sea conditions and back on land.

‘Sadly this was not to be.

‘We are incredibly proud of their efforts and know how traumatic these incidents can be for all involved.’

Someone who witnessed the incident said: ‘I was on the beach with my family today when this incident happened.

‘Obviously coastguard helicopters always generate attention and the beach was extremely busy with thousands of people enjoying what was a perfect summer day.

‘It was an awful thing to witness despite what was obviously an incredible effort from all the emergency and rescue services involved and also a large number of members of the public.

‘Our thoughts are with everyone involved and whilst I’ll not go into any details, it was utterly heartbreaking and extremely upsetting.

‘Our coastguards, lifeguards and emergency services really are incredible though.’

Another shocked eyewitness said: ‘Just got back from Perranporth beach where we have witnessed the most horrific thing unfold before all of our eyes.

‘Hold your kids tightly and spend all your time with the people who are special to you and forget the rest.

‘There are certain images that will stay with me forever. Heartbroken.’