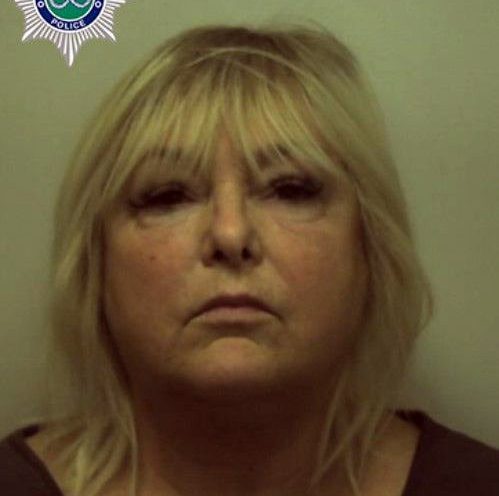 A mortgage broker faked having terminal cancer in order to avoid having to stand trial for conning a man out of £18,000.

Jean Adshead, 57, pocketed the cash from a man who wanted to buy the Alma pub in Newcastle in 2013.

She had worked with her victim previously, but he smelled a rat when Adshead asked for a substantial amount of money.

Prosecutor Roger Brown said: ‘There came a point where things stopped for a moment [in the purchase of the Alma]. She claimed to be ill. In fact, she had been sent to prison for almost exactly the same type of offence.

‘She came out of prison and she started sending the victim further messages requiring more money. But by this time, he had started looking into what was happening.

‘He realised he had been swindled and stopped paying her money. The total amount was over £18,000 in cash and bank transfers. He realised she was swindling him because somebody else had bought The Alma, but she was still requesting money.

‘She was arrested and she denied that she had been swindling him. She appeared before the court and pleaded not guilty and the matter was set down for trial.’

Adshead was diagnosed with breast cancer in October 2016 and treated for it by February 2017. However, she started lying to the court in November 2017, forging documents that she then provided to the court and Crown Prosecution Service.

The CPS then considered dropping the case, but it caused such distress to the victim that they decided to contact the doctor, who it turned out had retired in March 2016.

When she was arrested in November 2019 she said she was terrified of going back to prison.

As she was jailed for more than two years, Stoke-on-Trent Crown Court heard Adshead has a long record of offences including obtaining bank transfer by deception.

Elizabeth Power, representing Adshead, said that she had spent four months in prison for the same type of offence and had a ‘harrowing’ time.

She said: ‘She had a deeply harrowing period in custody and was petrified of returning and did all that she could in forging documents to try and prevent her return to prison.

‘She did have a tumour removed and that has caused ongoing problems and she tells me while she was in custody she had ongoing difficulties with that because she wasn’t receiving appropriate medication.’

Sentencing Adshead, Judge David Fletcher said: ‘The decision made by the CPS to check again what was an extremely convincing forgery of a letter from a consultant oncologist, is the only reason why this matter unravelled.

‘I was convinced myself about the circumstances you were putting forward and illnesses you were saying you had.

‘You had numerous conversations with members of staff at this court, numerous emails were exchanged explaining about your breast cancer.

‘Explaining that your life expectancy was severely reduced to such an extent that having been made aware of the documentation we were giving clear indication to the Crown that they should review the decision to prosecute.

‘I hope at the age of 57 this puts all criminal behaviour behind you.’