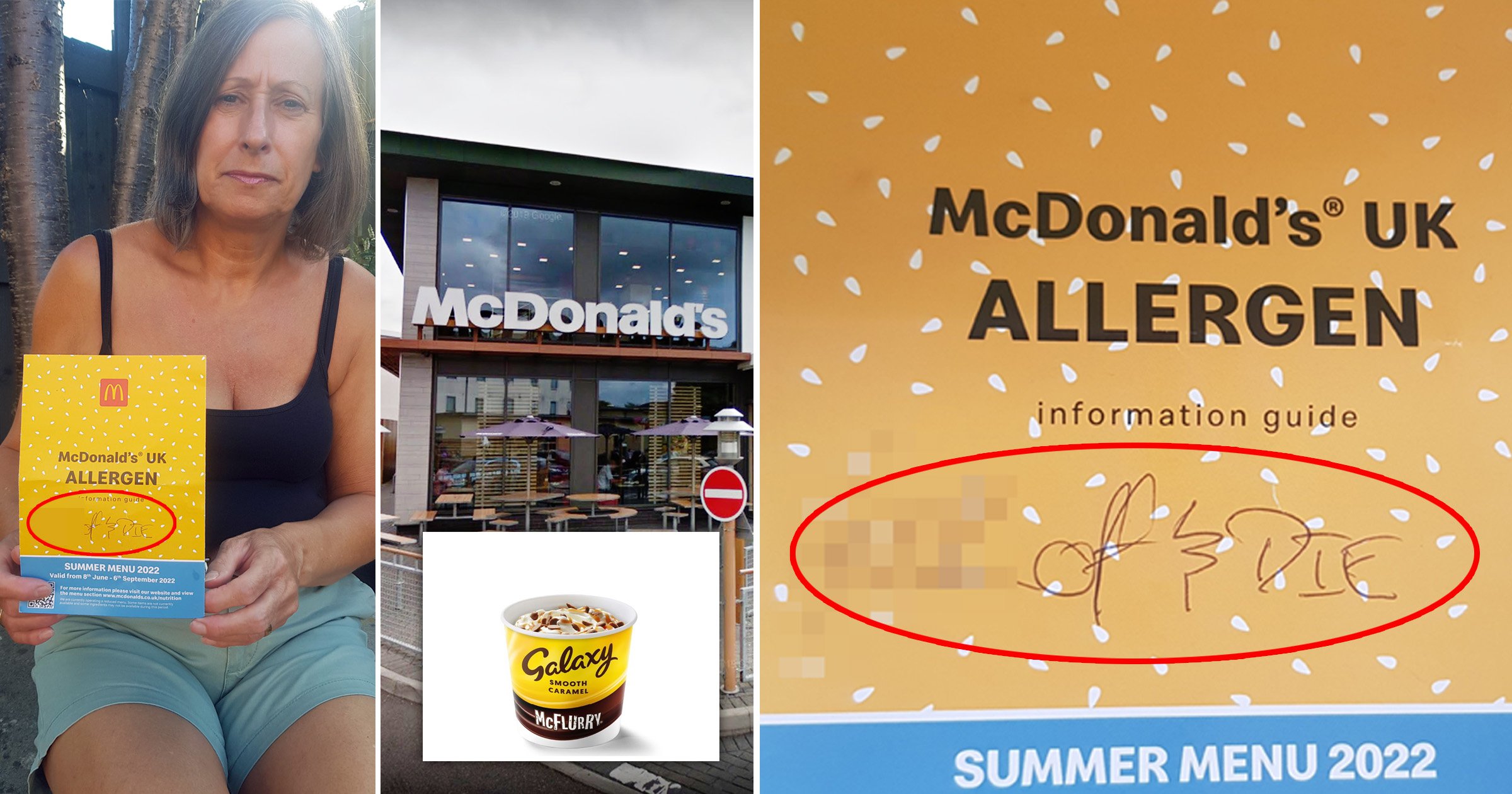 McDonald’s has been forced to apologise to a coeliac woman who was told ‘f**k off and die’ by an employee across an allergen information guide.

All Bernie Bowles did was ask if the Galaxy Caramel McFlurry contains gluten at the Maccies in Weyhill Road, Andover, Hampshire.

She was handed a yellow leaflet with a guide to allergies to keep for ‘future reference’, but she only noticed the offensive message when she’d got home.

McDonald’s has confirmed it was scrawled by one of its employees and said ‘appropriate action was undertaken’, but refused to say what that was.

Bernie says she contacted the McDonald’s complaints team just hours after finding the message and was promised a £15 voucher as compensation.

But she insists she’s still not been sent it and instead was asked for a copy of the leaflet while they look into the incident.

The retired bank officer has since questioned if McDonald’s ‘don’t want’ customers with allergies and sees them ‘as an inconvenience’.

Bernie, 63, fancied an ice cream to cool down during the hot weather of July 13 and popped into her local McDonald’s.

The keen walker is able to eat some Galaxy products but not others, so asking about its gluten content was a perfectly reasonable request.

‘When I asked if the McFlurry was gluten-free, the staff member wasn’t sure so she walked off and then handed me that allergen leaflet,’ said Bernie, from Andover.

‘I saw there was writing on it. There were figures on the back and some writing on the front, but I hadn’t actually read the cover because I’d just opened it.

‘I didn’t want to buy one and risk having a reaction, so I went to hand the leaflet back. The worker said I can keep it for future reference, she had no clue what was written on it.’

Bernie added: ‘When I came home, I could believe what was written on it. I thought that, quite honestly, it’s very inappropriate and it’s quite offensive.

‘It adds insult to injury because I didn’t know if I could eat the McFlurry and then I saw that.’

‘Yes, I do have a sense of humour and it may be banter between members of staff but they should be very aware of what they’re writing comments on,’ she said.

‘They need to make sure that if they are writing comments that it doesn’t get handed out to a customer.

‘I don’t think they’re taking the matter seriously, I’m not a happy bunny.’

A spokesperson for McDonald’s said: ‘We take allergens extremely seriously at McDonald’s. This incident is completely unacceptable and is in no way in keeping with our company values or what we expect from our employees.

‘As soon as we were made aware of what happened, an investigation was conducted as a matter of urgency.

‘The employee was identified and the appropriate action was undertaken. We’d like to apologise to the customer, who is now in contact with our customer services team, for their experience and how it was handled.’