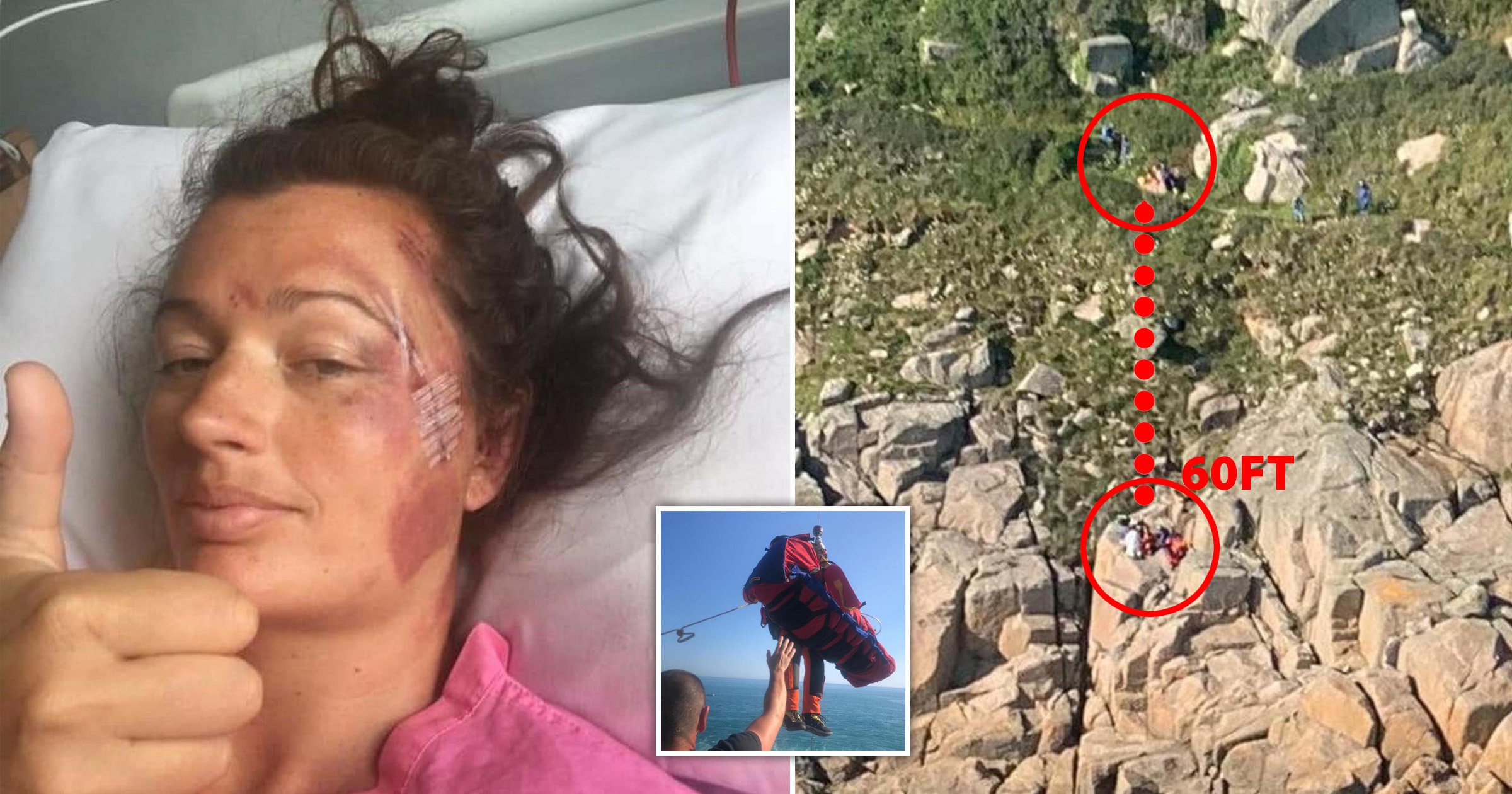 A walker who slipped and plunged 60ft from a clifftop amazed doctors who told her it is rare for anyone to fall so far and survive.

Rebekah Crawford suffered six lumbar spine fractures when she lost her footing on a narrow path near Lamorna Cove, Cornwall, and tumbled over the side.

Rescuers managed to reach her on a narrow ledge above a ‘sheer drop’ onto rocks before a helicopter arrived to fly her to the Royal Cornwall Hospital in Truro.

The 37-year-old physiotherapist recounted how she heard her sister’s horrifying screams as she plummeted to the rocks during the family walk in June last year.

Rebekah said: ‘I was on a narrow bit of path, not much more than a foot width, and my left ankle just twisted and there was absolutely nothing to my left.’

‘I remember that awful feeling of falling and there was nothing underneath. Then my head hit a slab of rock,’ she added.

‘I didn’t realise at that point that I’d actually fallen 56ft down the cliff. I was trying to claw at the grass.’

‘My head hit this slab of rock and the noise and the pain – I’ve just never felt anything like it. It went through my whole body,’ she added.

Rebekah’s sister Debs, who was walking with her, said: ‘It’s like something you see in the movies — a body just free falling, bouncing off rocks as she went.

‘I remember looking over the cliff and thinking, “Oh God, my sister’s dead”.’

Debs added: ‘I distinctly remember the helicopter overhead and the Cornwall Air Ambulance came into view and I remember breathing a sigh of relief, thinking “thank God for that”.’

But the steep cliffs and loose terrain meant the helicopter had to land on a headland some distance away, forcing Critical Care Paramedics Pete Storer and Jeremy Griffiths to make the rest of the journey on foot with their medical equipment.

Mr Storer said: ‘It was one of the most hazardous areas I have worked in.

‘We were confined to a tiny ledge above a sheer drop of over 100ft.

‘Rebekah was in a great deal of pain and we knew an aerial winch was the only way to get her off the cliff safely.’

The crew, including a doctor from BASICS and the Land’s End Coastguard Rescue Team, safely secured Rebekah and their equipment to the rocks while they waited for the helicopter.

The Coastguard airlifted Rebekah and rushed her to hospital, where a CT scan revealed she had a head injury but luckily no bleed.

She suffered six lumbar spine fractures that didn’t require surgery and after five days was discharged.

‘I thank god that day. If I’d fallen two feet further over I’d have gone right off the edge,’ said Rebekah.

‘I remember thinking it was surreal – I was so scared being winched by the helicopter. The crew were just incredible, I owe my life to them.

‘The doctor said they rarely attend someone who falls that distance and survives.’

For the next few weeks, Rebekah had to walk with a frame and crutches while she built up her strength.

She was finally able to return to work at West Cornwall Hospital in September – but she has yet to walk on the coast path since the incident.

Rebekah added: ‘It was one of the most scary things that’s ever happened to me but also really put life into perspective.’