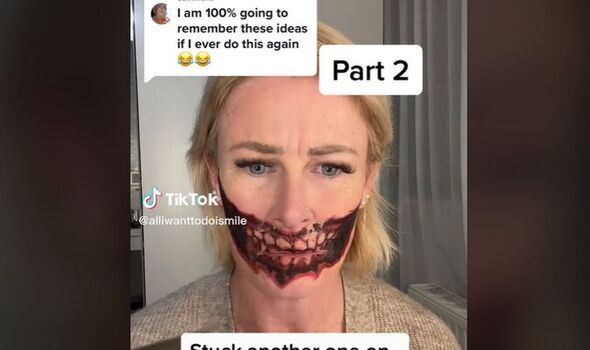 A woman has turned to social media users for advice after realising her temporary face tattoo would not come off her skin. Elizabeth Rose, 46, had bought some “freaky clown” stick-ons for Halloween this year, but quickly found them to be more of a trick than a treat.

Showing the temporary tattoos on her cheek, forehead and around her mouth, the grandmother struggled to remove them, describing it as a “fail”.

The look – which includes ghostly teeth and a couple fake gashes – ended up scaring her more than those who saw her on October 31.

Without remedy, Ms Rose feared she would have to go into work with the ghoulish visage.

In a video posted on TikTok, she said: “Put a tattoo sticker on, join in a bit of Halloween, you know?

“Put some on my granddaughter as well. She’s seven, and my daughter rings up going ‘has it come off?’

“Well it can’t be that difficult, surely?”

Ms Rose then proceeded to attempt to remove the temporary tattoos with a makeup remover cloth.

But despite some vigorous scrubbing, the facial features would not come off.

She then tried to tackle the patch on her forehead – replete with fake stitches – but to no avail.

She joked there was a chance she would have to come up with some nifty excuses to explain why her granddaughter, had gone to school covered in scars.

Not knowing what to do and with work in the morning, she turned to other users of the clip-based social media platform for advice.

Viewers saw her plea and chipped in with suggestions – as well as some revealing they too had experienced a similar issue.

Some said she should use some a form of oil that was healthy for skin, while others proposed using tape to whip the temporary tattoos off.

One commented: “The thought of you walking into the office like that has me rolling and I don’t even know you!”

Another wrote: “We made the same mistake. We Googled and found that oil took it off but by that point, we’d already scrubbed our faces red raw!”

After a wave of suggestions came rolling in, Ms Rose was thankfully able to get the Halloween tattoos off before heading to bed.

She updated her followers that she had used a water cleanser, which turned out to be “fairly successful”.

Ms Rose joked: “The only difference is I literally look like I’ve been slapped in the face ten times by Will Smith!” – a reference to the actor’s altercation with Chris Rock at the Academy Awards earlier this year.

Temporary tattoos typically last around a week or two before coming off.

Most end up cracking before falling off bit by bit.