MOSCOW — A nearly 20-year taboo on reporting in the Russian news media about President Vladimir V. Putin’s personal life has unraveled — just a little — with an interview broadcast on state television with a woman who has been described as his daughter.

The interview suggested some softening of Mr. Putin’s steely image and the prospect that his two adult daughters may be easing into public life.

Russia has no enduring tradition of a public first family, and Soviet and post-Soviet leaders have taken various approaches. Mr. Putin, a former spy, has mostly kept his daughters out of sight.

He has occasionally spoken with affection of his daughters, and last year announced that he was a grandfather. Still, throughout his tenure Mr. Putin has insisted that his family life remain private — even as state television has lavished coverage on his leisure time spent alone in the Siberian outdoors, hiking or horseback riding, sometimes shirtless.

Vedomosti, a Russian newspaper, reported that the interview, which aired on Thursday and was rebroadcast on Friday, was the first with the woman, Katerina Tikhonova. She has been widely reported by Russian and Western news media to be the president’s younger daughter, though Mr. Putin has never publicly acknowledged her as such.

“A big event in our Byzantium,” one Russian in the political opposition wrote on Facebook.

On the show, Ms. Tikhonova was asked about her work as director of a scientific institute. The show profiled a group of scientists developing devices that read brainwaves.

The coverage, as fawning as that accorded to Mr. Putin, portrayed the research as groundbreaking and vital for Russian technology, suggesting an emerging role for Ms. Tikhonova as a champion of Russian science.

Her appearance on state television suggests a potential public role for the presidential family, a fraught topic in Russian political culture since Soviet times, Nina Khrushcheva, a professor of international affairs at the New School in New York and a granddaughter of the former Soviet leader Nikita S. Khrushchev, said in a telephone interview.

Joseph Stalin kept his family cloistered from public view, even while promoting his sons in the army, but in 1959 Mr. Khrushchev toured the United States with his family, Ms. Khrushcheva said. President Boris Yeltsin’s daughter was a public figure in the 1990s, before Mr. Putin reversed course. 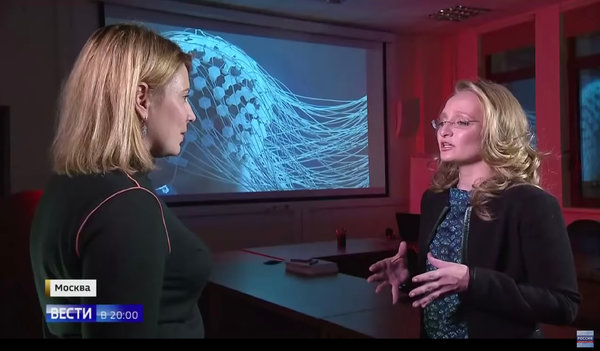 The apparent shift now, amid sagging ratings in the polls for Mr. Putin, “is a way to show the family is involved in building Russia, and it’s not just Putin sitting in the Kremlin,” Ms. Khrushcheva said. “It was to show that his girl, his family, is putting a stamp on the future, on science, on the future of Russia.”

Mr. Putin’s youngest daughter, born Yekaterina V. Putina while her father was posted in Germany as a spy, is now 32. Her mother, Lyudmila Putina, mostly vanished from public view midway through Mr. Putin’s tenure, and the two divorced in 2013. She has since reportedly remarried.

Putting Ms. Tikhonova on television, Ms. Khrushcheva said, is showing Russians that “there’s more than one Putin working for us.”

For the television program, Ms. Tikhonova was interviewed in front of a computer graphic of a head seemingly wired to electrodes. Plugged into these devices, she said, “you can really say that a person realizes the potential of technology, and himself, at the same time.”

The Kremlin has declined to comment on Ms. Tikhonova’s identity. During the television show, she was identified as “director of Innopraktika and deputy director of the Institute of Mathematical Study of Complex Systems at Moscow State University.”

Ms. Tikhonova’s marriage to Kirill N. Shamalov, a Russian investor, had raised concerns about potential conflicts of interest when a Russian state pension fund invested $1.75 billion into Sibur, a petrochemical company that was at the time partially owned by Mr. Shamalov. Ms. Tikhonova and Mr. Shamalov have since reportedly separated, Bloomberg News has reported. Sibur denied any conflicts in receiving the pension fund loan.

In June, Rossiya 1, another state-run channel, interviewed the woman reputed to be Mr. Putin’s other daughter, who is also living under an assumed name — Maria Vorontsova — about her work as a child endocrinologist. In 2016, a Russian magazine, The New Times, reported that Ms. Vorontsova was Mr. Putin’s elder daughter.

In his fullest explanation about the secrecy around his daughters, Mr. Putin suggested a desire in 2017 that his grandchildren “live like ordinary people,” out of the public eye.

“The thing is, you see, I do not want them to grow up like some royal princes,” he said, answering a question during a televised call-in show. “They need to have a normal environment and ordinary interaction with other children. The minute I give their names and ages, they would be identified immediately and would never be left in peace.”

Mr. Putin said that his daughters are “involved in science and education,” and “live normal, everyday lives.”

President Donald Trump is "supportive" of another stimulus check, according to the White House chief of staff. Mark Meadows spoke with reporters on Monday suggesting…

TOKYO (Reuters) – Nissan Motor Co (7201.T) has raised $7.8 billion in financing from its creditors since April as it tries to shore up its…