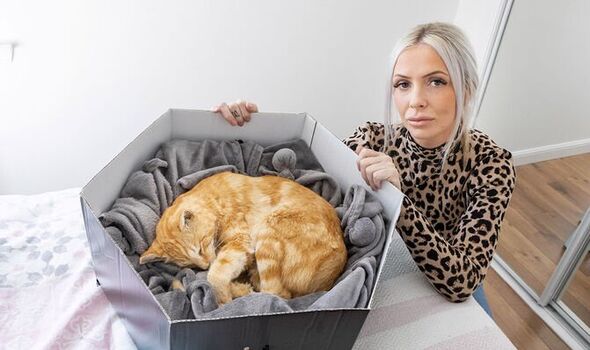 Harriet Peace, 28, was heartbroken when her “best friend” Tango died and said she couldn’t stand the thought of burying her cat. So, the nursing assistant opted to have him preserved – a process which took seven months and cost a huge £4,000. Now, Harriet has collected Tango, who she had requested to be posed curled up in his basket.

“When Tango died, I was devastated – I couldn’t bring myself to have him cremated,” Harriet said today.

“When someone mentioned taxidermy it sounded like the perfect way for him to be with me forever. I was really nervous when I dropped him off because I was worried he would look different and I would have made the wrong decision.

“But when I picked him up it was all worth it. He looks so realistic. He’s exactly how he was and I’m so happy I have him here to remember him.

“Everyone jumps to the conclusion it is disgusting or degrading or prevents an animal from being at peace, but it’s done very respectfully. If you had the chance to have your pet preserved how it was before for the rest of your life, wouldn’t you do it?

“It is the best decision I ever could have made.”

Tango was struck by a car in September last year, Derbyshire Live reports. His distraught owner didn’t want to bury or cremate her pet, whom she says she treated “like her child”.

And so, after carrying out some research, Harriet, from Mauchline, Ayrshire, chose taxidermy.

The process involves preserving an animal’s body to remain looking lifelike but only a select few businesses in the country offer it for pets.

Harriet, who found a business more than 400 miles away in London, said: “He was like my child, it was a huge loss to me. He had been through so much with me and I thought I’d have him for at least ten years – he was my wee sidekick.

“Taxidermy sounded like the perfect way for him to be with me forever.”

Harriet had to travel to London with Tango frozen so he could be ready for the procedure, which involved different oils and chemicals.

But Harriet’s friend, including her now ex-boyfriend, thought it was a bad idea.

“I thought it was an amazing thing to do, but I learnt quickly that everyone has different views on it,” the nursing assistant continued.

“You hear a lot of bad things, and it costs a lot of money, so I was worried. You don’t really know what to expect.

“But as soon as I walked in and saw him sat with all the other cats I just knew he was absolutely perfect.”

The woman used Get Stuffed, a firm based in Islington, north London, for the procedure. It’s a long-running family owned business, which last year admitted the industry is seen as “a bit like Marmite”.

But all Harriet’s worries vanished as soon as she saw Tango after the process.

She continued: “I couldn’t believe it. His fur and everything – it was amazing. He is so realistic.

“Tango is exactly how he was. It’s not for everyone but honestly, I couldn’t thank the man who did it enough. After losing my best friend it’s the best gift anyone could give me. It’s the best decision I ever made.”