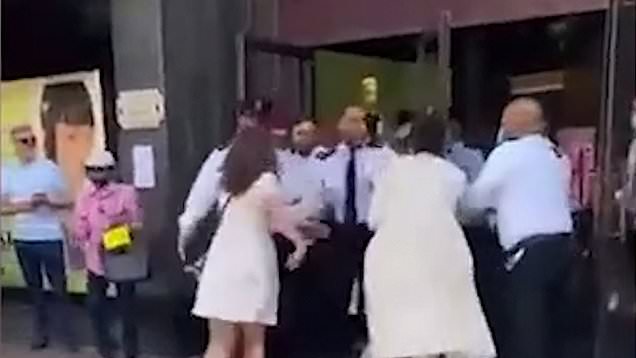 A woman allegedly spat at a Harrods security guard after being ejected for ‘extremely aggressive behaviour’ and not wearing a face mask.

Footage captured the shocking scenes outside the famous department store in central London.

A woman is heard to shout: ‘Look at this man! I haven’t done anything wrong you know’ at guards who line the entrance to the store in Knightsbridge.

As she is restrained, she says: ‘What are you doing? What the hell?’ and another woman is heard to say ‘Record it’.

The confrontation happened on Thursday in front of horrified onlookers, some of whom made their own video recordings of the drama.

Others tried to de-escalate the situation, saying ‘Relax, relax’. Numerous expletives are said and the woman escapes from the melee and begins running down the pavement and into Brompton Road.

A second woman tries to hold one of the guards back as he gives chase, and around five guards catch up with the woman near a car in the middle of the road and restrain her on the ground. 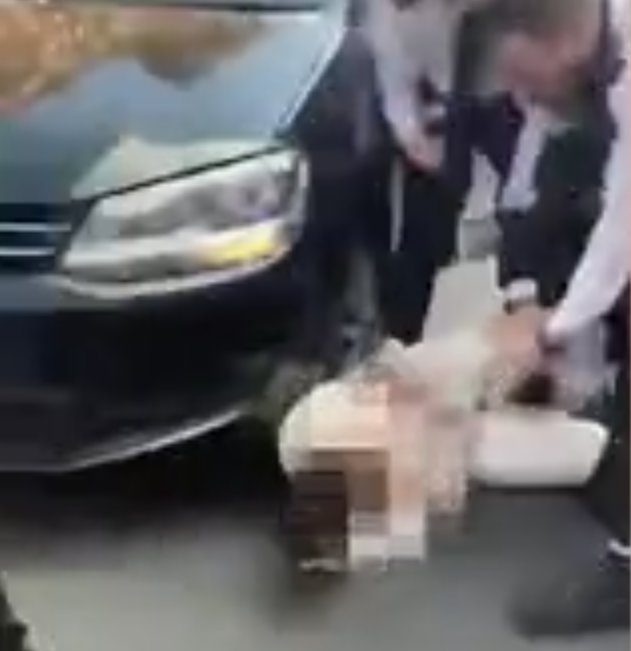 The woman who was dressed in a long beige cardigan was thrown out of the store after refusing to wear a face mask, The Sun reported.

A spokesperson for Harrods said the women had been removed from the store after ‘behaving aggressively’.

‘Harrods security was called following complaints of a group behaving aggressively within the store,’ the spokesperson said.

‘Our security team is trained to protect those inside the store against any behaviour that may put our customers and employees at risk.

‘When security attempted to remove the individuals, they resisted with force and reacted with extremely aggressive behaviour, which included spitting at a security officer.

‘One of the individuals was later arrested and detained at the scene.’

The Metropolitan Police said they have charged Yursa Elmzouri, aged 20, with common assault.

Elmzouri, from London, was bailed and will appear at Westminster Magistrates’ Court on Friday, July 2.