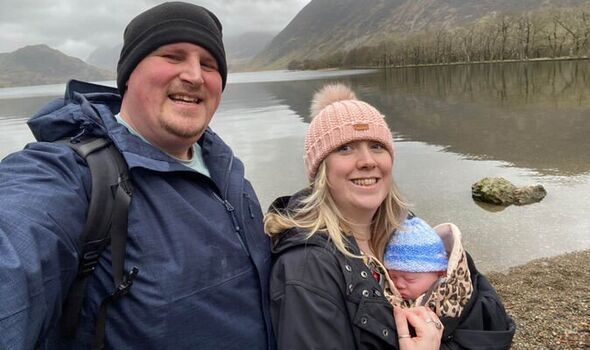 Esther George was diagnosed with endometriosis at the age of 16 and waited eight years for an NHS referral for help with the condition – a referral that never materialised. Instead medics told her that her condition – which causes scarring to build up in the fallopian tubes making it difficult to fall pregnant – was so severe there was no chance of her ever having a baby.

But after paying for a private consultation and undergoing extensive surgery, she was able to have fertility treatment and now she and husband Andrew, an agricultural services manager, have a baby son called Caleb who has made all their dreams come true.

Esther, 32, a marketing manager from Hull said: “We have been waiting such a long time for Caleb, and now he’s here, we can’t quite believe it.

“We look at him every day and know what a miracle he really is. We thought we would never be parents, so now we feel incredibly blessed.”

It was in September 2016 – eight years after she first asked for help on the NHS – Esther was seen by a consultant, who carried out surgery to remove all the scarring from her womb.

She said: “It was a long operation as there was so much scarring, and he removed it all by hand. He had said my womb had been uninhabitable before, so there had been no chance of having a baby.”

The couple had to wait 18 months after surgery whilst Esther’s body recovered, and wanted to start IVF treatment in 2020, but couldn’t because of lockdown.

Then Andrew caught Covid, so it wasn’t until March 2021 that they started the treatment at Hull and East Riding Fertility.

Doctors managed to retrieve six eggs, five fertilised, and one embryo was placed into Esther’s womb.

She added: “It was a tense two-week wait, but then I did a pregnancy test and it had two positive lines on it. I couldn’t believe that I was actually pregnant. It was amazing, after all we had been through.”

Her pregnancy went smoothly until she was 36 weeks, and doctors said they couldn’t find the baby’s heartbeat. An emergency caesarean was planned before the heartbeat was found –  only for Esther to go into labour a few days later.

Caleb was born in January. But then just minutes after the delivery, Esther started to haemorrhage and lost three and half litres of blood. A transfusion saved her life.

She said: “Andrew thought he was going to lose me, and be bringing Caleb up on his own. Luckily the doctors managed to stop the bleeding, and I was given five blood transfusions afterwards.”

Having made a recovery she then battled through pancreatitis when Caleb was just a few weeks old.

She said: ‘That was incredibly difficult, being separated from him when he had only just been born. But now thankfully we are all at home now, and I have made a good recovery. We can now enjoy being a family together.

“It has been such an emotional journey to be a mum – and one that started when I was just 16. It has taken 13 years but now we finally have our miracle baby. We feel like the luckiest parents in the world.”

Pam Andrew, from Hull and East Riding Fertility said: “Infertility can be devastating for couples. We were delighted to be able to help Esther and her husband have their baby son.”