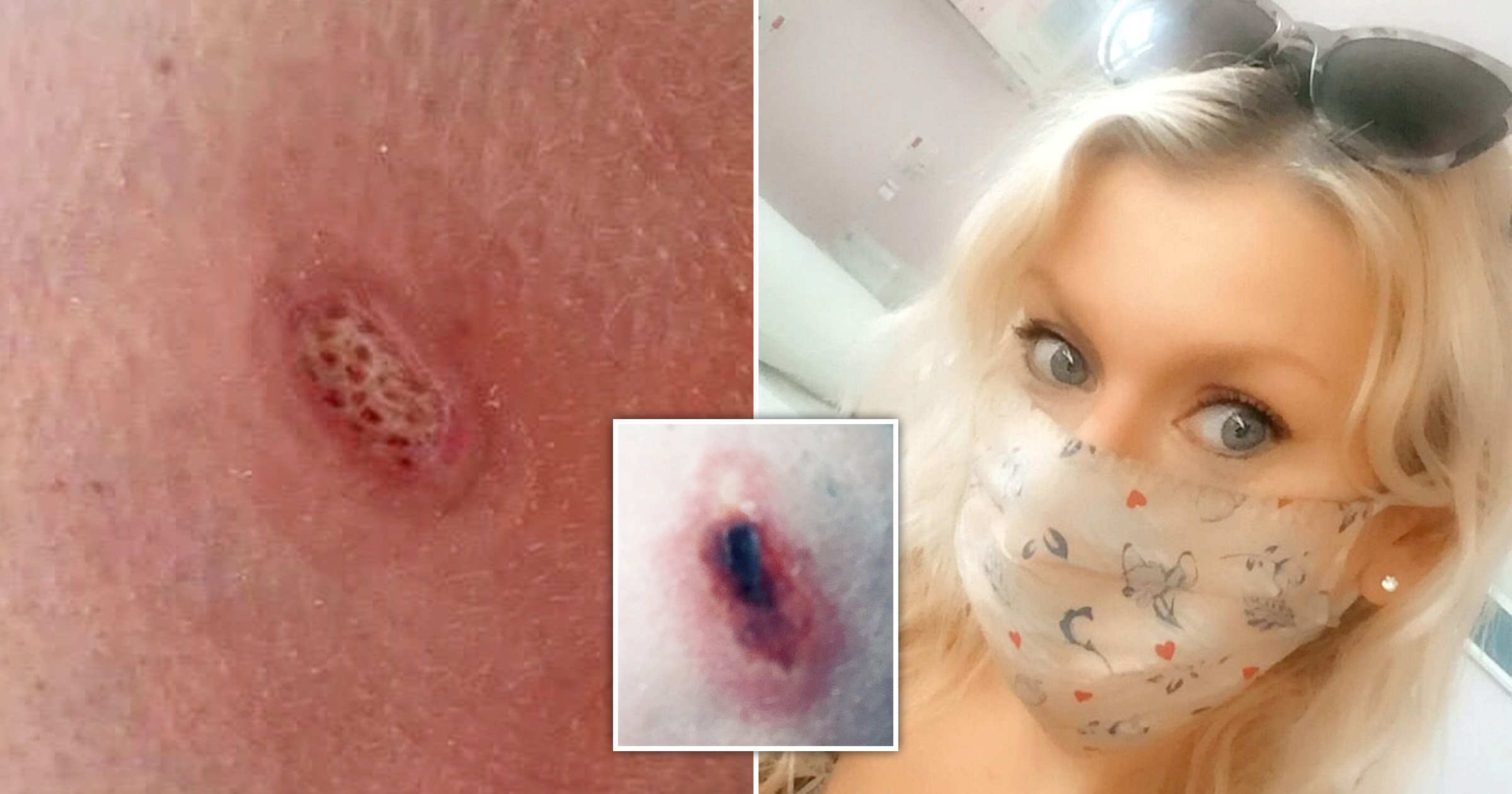 An arachnophobe was hospitalised three times after being bitten by a spider that was hiding under her toilet seat.

Jo Kenyon, 34, suffered huge blisters and could barely walk after the incident at her home in Leeds last year.

Medics feared she was at risk of contracting life-threatening sepsis if the fang bite got infected but she made it to hospital just in time.

She’s now speaking out to warn others to check their loo seats after the close encounter with the spider, thought to be a false widow, which she eventually flushed away.

Radio producer Jo said: ‘The doctors said that if I hadn’t come in straight away then the bite could have led to sepsis and possibly killed me.

‘It was really painful to walk for the first few days and then it hurt for weeks whenever I tried to sit down.

‘I’ve been terrified of spiders all my life. Given that everyone knows how bad I am with spiders and how far I go to avoid them, most people’s response was that it could only happen to me!’

Jo had only just woken up and stumbled into the bathroom to use the toilet when the spider bit her last year.

She felt a burning sensation on her upper left thigh and immediately jumped up from the loo.

Jo said: ‘The only way I can describe it is it was like when you brush past somebody who is holding a lit cigarette.

‘It was such a sudden and strange burning sensation that I immediately jumped up, thinking what the hell was that?

‘I lifted the toilet seat and saw this massive spider that had been hiding underneath it.

‘I screamed instantly at the sight, managed to knock it into the bowl and flushed it straight away.

‘It was so huge, it was a real big bugger! It completely freaked me out. I looked in the mirror and I could see these bite marks – tiny pricks from the pincers.

‘I left it for half an hour but it was properly stinging and when I looked in the mirror again, I could see it had all blistered.’

Jo thought she’d call 111 just in case and was shocked when operators insisted she must go to A&E straight away.

Medics at Otley Hospital told her the bite could have become septic and killed her if she’d left it any longer.

Jo said: ‘It was really scary knowing that a spider bite could have killed me.

‘It was especially frightening considering it happened in England – I’d put off going to Australia for years due to fear of spiders, but it was in Yorkshire that I got bit.’

Jo had to go to hospital twice more in the week after she was initially admitted because the blisters needed to be repeatedly popped and drained and her leg cleaned and dressed.

Her third visit to the hospital came after pain from the bite became so severe that she could barely walk and struggled to sleep.

Jo said: ‘I could barely sit down when the pain was at its worse, the bite was just in such an awkward place.

‘I could hardly walk and I had to sleep on my front for ages because it was just too painful to sleep normally.

‘It took months for the pain and the oozing to stop, and by that time it was winter so all I wanted was a bath but I couldn’t get that area of my leg wet so I could only shower.’

After months of painful recovery, Jo’s bite healed but she has been left with a scar.

Doctors told her that there are two types of spiders in the UK that can bite humans – garden spiders and false widows – but could not determine which it was.

Jo said: ‘I’d just tell everyone to always check under the toilet seat – you never know what could be hiding there!’