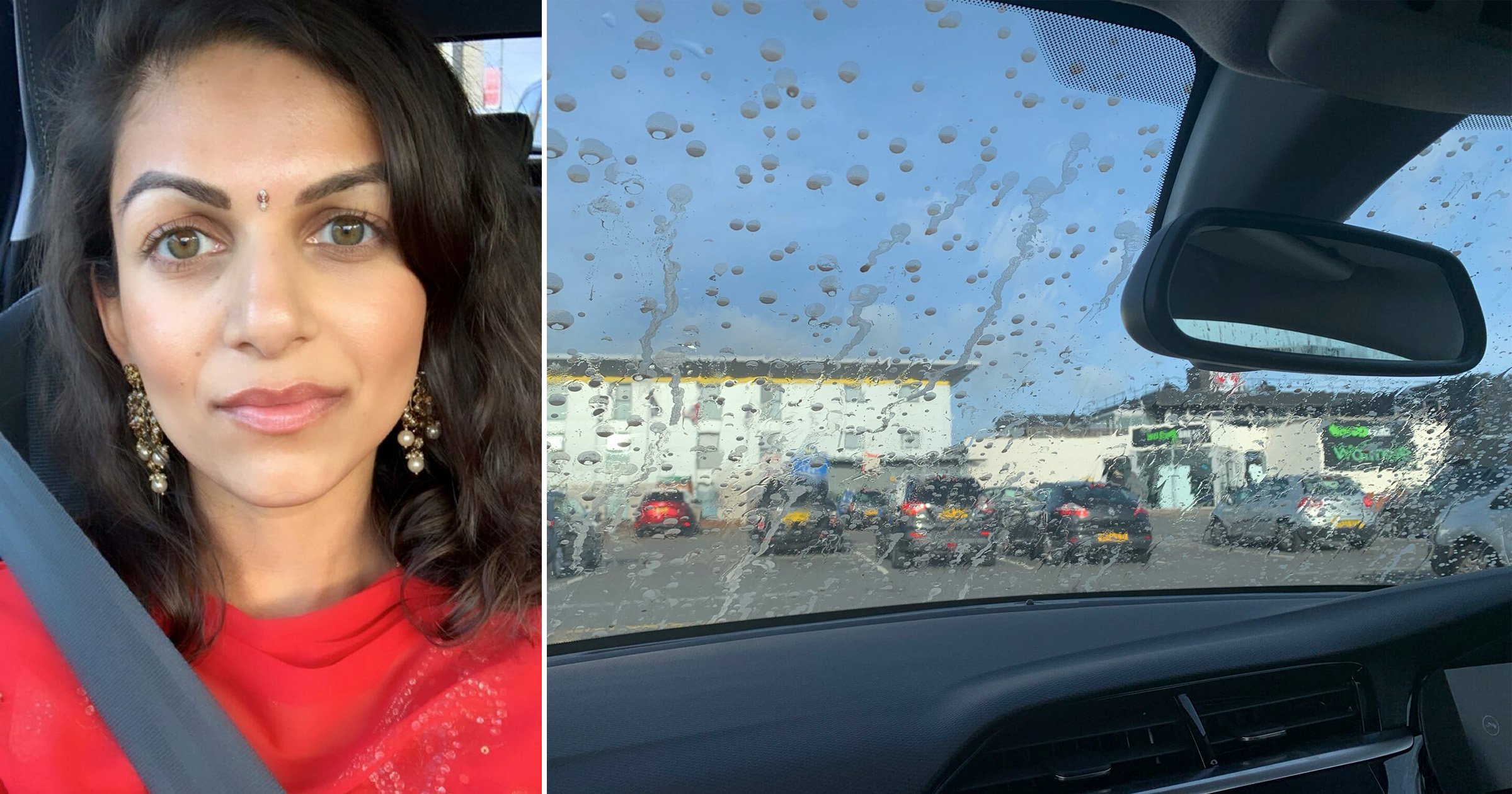 A diversity champion has told how she and her husband were victims of suspected racist abuse when chocolate milk was poured over their car.

The couple had stopped at a service station in Leicester and came out to discover the liquid covering the windscreen, bonnet and doors.

Priya Shah, 28, believes she ‘stuck out’ as she was wearing traditional Indian dress as they travelled to a family gathering in Nottingham.

She told Metro.co.uk that the incident on Sunday morning shows a ‘small minority’ of racists are still determined to give the country a bad name.

The couple, from north London, had stopped off at Leicester Forest East northbound services on the M1 as they went to a temple.

Priya, the director of diversity organisation BAME in Property, said: ‘As soon as we got out of the car we realised we stuck out.

‘I had a few odd looks because I was dressed in traditional Indian clothing but we didn’t think anything of it.

‘When we came out of the service station our entire car was covered in chocolate milk. It felt like it was racially motivated as it was only our car and the way it was spread over the car wasn’t accidental, it was all over the windscreen and both doors.’

As the couple alerted security, Priya had further indications that they had been deliberately targeted.

‘As my husband alerted security I was stood by the car and I had a few dirty looks from passers-by, I think because I was dressed differently,’ she said.

‘There was one Indian lady who was really helpful, she came over to see if I was ok and she said she had experienced racism before.

‘At that point it made me think it was linked to the colour of our skin and the fact I was dressed differently.

‘At first, the security guard thought it might have been an accident but when he came out he realised we’d been deliberately targeted and he went really out of his way to help us clean the car. He felt quite shocked himself.’

Priya, who is British born-and-raised with Indian heritage, then shared her experience on Twitter, writing ‘welcome to racist Britain’.

She received almost 2,000 comments, most of which were supportive and sympathetic, as her tweets went viral.

The influencer also told followers that there was no CCTV covering the spot where their car was parked, writing ‘very convenient’.

‘This has never happened to me before and you never think that you will be a victim,’ she said. ‘It made me realise that whoever did this doesn’t care that I was born and raised in this country and I work and pay taxes.

‘What shocked me the most was that we could be targeted just over the colour of our skin. All brown people are just lumped into one by the racists.’

Priya said that while Leicester is one of the UK’s most diverse cities, travellers from all the country were using the services at the time.

The couple say they did not have time to approach police as they rushed to the day-long event and believe the lack of CCTV would hamper an investigation. but are now considering reporting the incident

‘Initially it was just a rant on Twitter because I was shocked and frustrated,’ Priya said.

‘But the amount of supportive messages we’ve had, with the majority from complete strangers, made me realise that whoever did this is only part of a small minority, although they do ruin things for the rest of the country.

‘We stopped at services on the way back and we were worried and we had a conversation about whether one of us should stay in the car but I said I didn’t want this to stop us from living our lives as normal.

‘It was a one-off incident, although once is enough.’