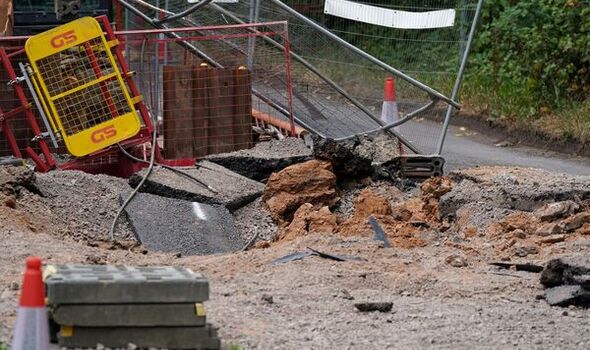 Katie Lallo, 30, was on her lunch break in Bradgate Park, Cropston, Leics, when the ground erupted, her brother Will Marshall revealed.

The force badly broke the fibula and tibia in her lower leg.

Will said: “The whole road exploded. She was knocked out and was screaming when she came round.”

“Her ankle has been completely messed up, it’s an open fracture and she broke her lower leg.”

He said it was unclear if she will be able to walk properly again, adding his family “are really shaken up by it – and she is really struggling with it big time”.

Two contract engineers working on behalf of Severn Trent Water were also hurt in the explosion but did not need hospital treatment.

A villager tweeted that Kate was “lucky to be alive”, while another spoke of “a loud bang followed by screaming”. They added: “Some kind of hole had developed in the road and SevernTrent had sent engineers to investigate.”

“They must have tapped into something because the water main just blew up. There were two workmen inside the hole at the time who were hurt, but not badly.”

“However, I was told that a piece of tarmac had flown across the road in the blast and hit someone.”

The Health and Safety Executive has launched an investigation.

SevernTrent is also probing the incident, which happened at 1.30pm on Tuesday.

It said: “We’d like to thank the emergency services on site for their assistance and support.”

“The safety and wellbeing of the public, employees and contractors is of paramount importance to us.”

Leicestershire County Council said the road could be shut for up to 21 days.