A Just Stop Oil clip of its members being dragged off the road in London during a demonstration has been circulating on social media. The dramatic moments when Londoners took the law into their own hands have been leaving social media users divided. Members of the public took it upon themselves to drag the climate change activists out of the road in order to drive down the road which was blocked during the demonstration. This week the activist group has been upping the ante with their message by conducting a number of demonstrations across the capital.

A visibly angry driver of a silver hire van can be seen unblocking the road by dragging a protestor onto the pavement in order to get past.

After the man drives away the protestors go back to their seated protesting positions blocking traffic and holding up a banner.

Moments after the driver leaves the scene a man in white van storms over and does the exact same thing.

The man in the white van drives his van up to the protestors with full force.

The second angry man then begins to drag multiple protestors out of his way, in order to clear his path, before getting back into his car and driving off. 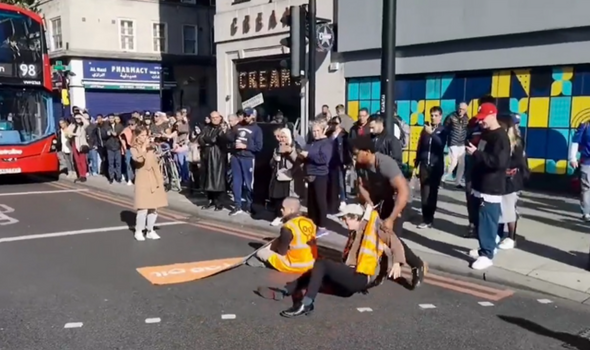 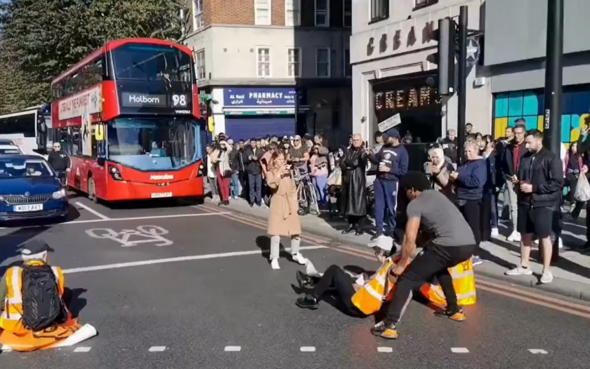 Users on social media have been reacting to the video clip which was originally posted by the environmental activist group Just Stop Oil and was reposted by Darren Grime with the caption “The working public have, understandably, had enough. They’re now doing the job that the police ought to be doing.”

One user XlisilooX wrote: “What, assaulting protesters? Protesters, that have every right to protest?”

@MaxwellPower95 said: “This is ASSAULT. Did you see the way he manhandled him there? Don’t suppose anyone got his reg plate?”

@LeeBorrell added: “People are polarised on this without understanding. There is an ECO problem and burning fossil fuels is part of it. White van man strong-arming concerned people isn’t the solution, but neither is sitting on a road.”

@NickyWood89 wrote: “No, Darren. Physical assault is not the answer. Protesters have a right to protest lawfully. These protesters, as has been highlighted by the Highways Act 1980, are wilfully causing an obstruction and should be arrested by the police and dealt with properly.”

@FlorestaQueen said: “The people praising the thug who’s dragged the lad off the road won’t be laughing when the climate crisis hits them hard in a few year’s time, they’ll be ashamed of their response as they see the world they’ve left for their kids.”

@Ejwwest added: “Yet earlier this year you were applauding the actions of the Canadian truckers.”

DON’T MISS: ‘Top of list!’ Charles may visit Canada instead of COP27 on first trip abroad as King[INSIGHT] 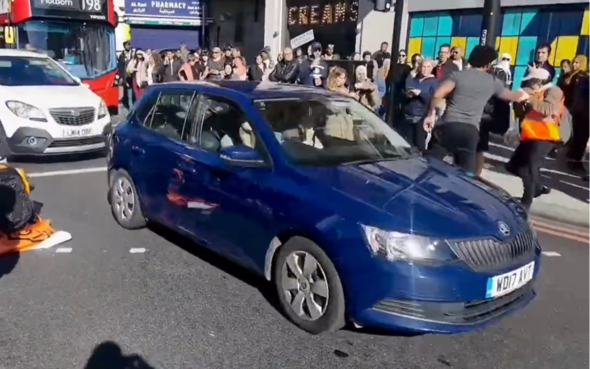 The group and its members are a closely related sister group of Extinction Rebellion.

Just Stop Oil has vowed to continue to cause disruptions until the Government aqueous to their demands.

In a recent press release published by the activist group, they shared that since the beginning of their movement which began dramatic demonstrations on April 1st, over 1500 activists have been arrested.

The group are demanding that the Government stop using fossil fuels in the UK.