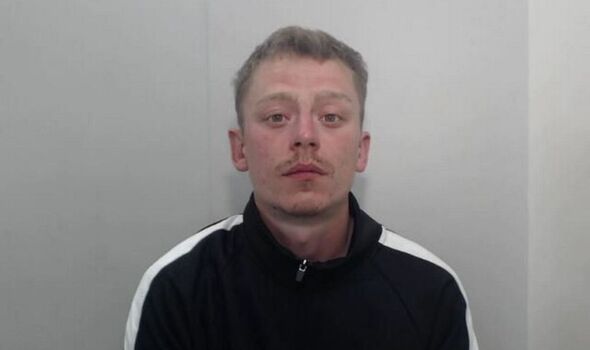 A thug has been jailed for attacking and trying to rape a man in a busy park.

Connor Farren-Bell met the victim while he was sitting alone on a bench “watching the world go by”.

Manchester Crown Court heard that after drinking a bottle of vodka together, the 25-year-old was later seen standing in front of the man, with his trousers down and “thrusting” while the man appeared unresponsive, reports Manchester Evening News.

As two witnesses walked past in the park in Rochdale, Greater Manchester, one coughed to alert them to their presence, causing Farren-Bell to stop.

They heard Farren-Bell shouting: “If you were a woman”.

The man was then attacked by him, who “rained” punches on his head, face, and body.

The victim was later found huddled by the entrance to the park, bleeding and confused.

Farren-Bell then returned to the park and walked past the victim, who shouted: “That’s him.”

When the witnesses told him what they had seen he said: “Oh no, he hasn’t done that to me” and vomited.

On the day of his trial, Farren-Bell pleaded guilty to attempted rape and assault occasioning actual bodily harm.

Last Friday, he was jailed for seven years and eight months, with an extended period of four years on licence.

Opening the case, prosecutor Daniel Calder said that on July 17 last year, the man had gone for a walk and was sat on a bench by a lake when he was approached by Farren-Bell.

The pair began chatting before Farren-Bell asked if he wanted to go for a pint, at which the man said he had no money, so instead the pair went to a local shop and bought a bottle of vodka.

After sharing the whole bottle, the man began feeling “funny” and was described by eyewitnesses as looking “insensible” and “incapacitated”.

As the two people, out on an evening walk, went past Farren-Bell and the man, they saw Farren-Bell stood up directly in front of the man engaging in a sex act.

Mr Calder said: “The witnesses coughed loud to alert him and noticed the victim had slumped to the left side of the defendant.

“They then heard him shouting aggressively, saying: ‘If you were a woman’.

“The couple walked on and could hear the defendant shouting as they made their way round.”

He said this later manifested into the violent assault.

The victim, whose last memory of the incident was drinking from the bottle, said his next memory was walking away from the bench before he was punched by Farren-Bell, knocking him to the floor.

During the attack Farren-Bell, who had ridden his bike to the park, used the bicycle to “pin” the man to the floor.

He was later found by the entrance to the park in a confused state.

After a couple of days he was taken to hospital where he was found with extensive bruising and cuts to his body.

Farren-Bell was arrested after his phone was found at the scene, and initially denied the attack in his police interview. He has since pleaded guilty.

In a victim personal statement read to the court, the man said he has experienced anxiety and suicidal thoughts.

He said he felt “ashamed and embarrassed” and has since had his sexuality questioned.

He added he has a hard time trusting people and lost a year of his life because of the court proceedings.

Farren-Bell was said to have previous convictions, including two offences of battery on his record.

Mitigating, David Bruce said it was a “tragic case”.

He said no force was used to engage in the sex act and that his client had not deliberately used drink or drugs.

“This isn’t a situation where there was violence used in order to facilitate the sexual abuse,” Mr Bruce said.

“It’s clear he has accepted a degree of responsibility, though he had very little recollection. He has expressed remorse.”

Sentencing, Judge Timothy Smith said: “The witnesses, and his family, said he was incapacitated and rendered insensible.

“This was sustained, prolonged and you were out of control. He was fortunate to not have received more serious injuries.”

He said Farren-Bell was described as having a “high risk” of serious harm in a presentence report, and that the trigger of the attack was not clear.

Finding him to be a dangerous offender under the sentencing provisions, Farren-Bell, of no fixed abode, was jailed for seven years and eight months with an extended licence period of four years.

He must serve at least two thirds of his sentence before he is considered for release by the parole board.

He was also ordered to sign the Sex Offenders Register for life.