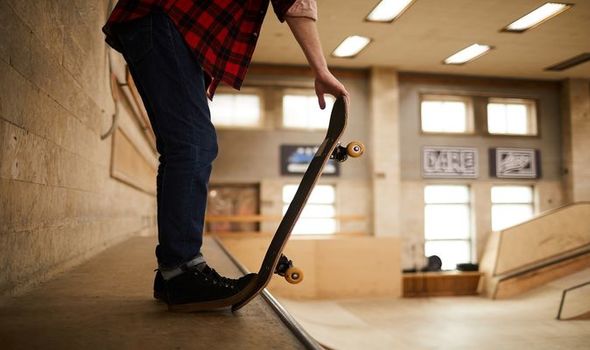 THE thrill of Olympic and Paralympic success in Tokyo is still fresh in the memory and our incredible haul of medals should already be inspiring a new generation of athletes to go for gold. But for many youngsters, a shortage of local sporting facilities could thwart their dreams before they’ve begun. Many swimming pools, athletics tracks, and sports centres are at the end of their working lives, and even fans of new sports like skateboarding and BMXing, could find their ambitions grinding to a halt.

AT THE Rush indoor skateboard park, Jerry and Michelle Norman should have been busy preparing for a hectic autumn with eager young novices trying to emulate the skills of Team GB’s young Olympic medallist, Sky Brown. Instead the couple were frantically running an ‘everything-mustgo’ auction because they had to close their hugely successful business in August. Rather than building dreams at one of Europe’s biggest indoor sports facilities, the site has been earmarked for the construction of flats.

Wooden ramps once used by thousands of young people, including Olympic BMX gold medallist Charlotte Worthington, are now being sold off to the highest bidder – just at a time when the wet and cold weather will soon make outdoor skate parks too slippery.

“When we closed at the end of August a child was literally clinging to my leg, saying ‘where will I skateboard now?”’ recalls Jerry. “It was a heart-wrenching day, especially after the highs of the Olympics when all the youngsters were blown away by Sky Brown.”

Rush Skatepark opened nine years ago at Brinscombe in a former industrial unit on the outskirts of Stroud, Gloucestershire, and developed into a leading skateboard and BMX venue. Now it is being dismantled and the site cleared to make way for housing. And Jerry and Michelle cannot afford to start from scratch on any of the alternative sites they’ve seen.

“It has cost £780,000 to turn Rush into a world-class venue,” Jerry says. “We took out loans and worked round the clock, but it was all worth it. The loans were paid back in five years and we’d built up a good reputation.

“We knew there was permission for housing on this land, but we thought we’d be here for many years. The real pleasure we’ve had is seeing the youngsters develop.

“Skateboarders often don’t like team sports like football or rugby, but they thrived when they came here. As they get more confident, they want to try more tricks and the older ones were very good at offering advice.”

Freddie Aplin, 13, learnt his scooter riding skills at Rush. He became the under 12s European champion and has taken part in contests in Barcelona.

“You could see him getting better and better with his balance, his turns and his tricks,” says his mum Amanda. “You only get good with practice, so having this skate park so near to our home was brilliant. Now all that has been taken away. The nearest other comparable facilities are in Cardiff or Corby, but we could only go there at weekends. Freddie was down here five times a week, which is what you need to progress. He’s one of the best scooter riders in the world for his age, but those skills will not get better without regular practice.

“It’s a terrible shame. We just don’t know what we’ll do, but it is having a bad effect on Freddie.”

BMX freestyle star Charlotte Worthington, 25, who left millions of TV viewers in awe with her 360 degree backflip in a gold medalwinning Olympic routine in Tokyo, used to enjoy swapping tales with the skateboarders and fellow BMX riders at Rush.

“It’s really sad Rush skatepark is closing among so many others,” she says. “If it wasn’t for my own local skatepark in Manchester, which has sadly also closed, I definitely wouldn’t be where I am today.”

Joanna Banks has the chance to be as good as Charlotte. She’s been the under-16 British champion BMX racer since 2019, but the closure has hit her prospects hard.

“Without Rush I would not be able to hold that title or be able to get that title at all,” she admits. “I really feel let down because it’s not just me that will have to give up that sport.”

It looks as though the stars of tomorrow will need to have the good fortune to live near top venues if they are to shine. For now, the only venue comparable to Rush and capable of holding major championships is Adrenaline Alley in Corby, north

Some 300 swimming pools have closed and nearly 2,000 more could be lost by the end of the decade.

Analysis by Swim England shows that of the 4,336 pools open, just 2,468 will be running by 2030 unless local authorities and the Government act now to replace or refurbish old facilities. Because of temporary pool closures during Covid lockdowns it is estimated that more than 200,000 11-year-olds have not learnt basic techniques like floating.

More than a third of primary school children did not manage to achieve swimming unaided for 25 metres. So the danger of permanent pool closures is stark, for more than just Olympic hopes.

Pools built in the 1960s and 1970s are coming to the end of their lifespan but cashstrapped councils and the Government have not earmarked the £1billion needed to restored and replace them.

James Guy, 25, who won two Olympic gold medals as part of the men’s 4x200m freestyle relay and the 4×100 mixed medley relay in Tokyo, says: “We were the most successful [swimming] team at an Olympic Games and to hear that our future stars might not be able to access pools in the next decade or so is horrendous. If there’s no pools, you can’t build the foundation for club swimmers to come and take our position as Olympic swimmers.

“We have to inspire that future generation and I’m pretty sure during the Games a lot of us did that. But we can’t do that if pools are closing – it’s absolutely appalling.”

Peaty is equally emphatic, saying after winning silver in the 4×100 medley relay team: “Sport needs money, everyone knows that. So there needs to be more investment than ever, to secure the next generation, especially in swimming where you’ve got swimming clubs who have to raffle and fundraise on their own.”

Nearly a quarter of all local authorities in England have a shortage of at least one swimming pool. That figure is expected to rise to 73 per cent by 2030.

“Swimming pools are naturally essential to the future of all our aquatic sports if we are to nurture the next Adam Peaty, Tom Daley, Anna Hopkin or Maisie Summers- Newton,” says Jane Nickerson, chief executive of Swim England.

One of the country’s greatest swimming assets, the 50-metre pool at Crystal Palace, south London, is currently shut along with the diving pool because significant repair work is needed. The 60-year-old building is showing its age and its long-term future is uncertain.

The Crystal Palace athletics stadium, iconic former home of British athletics for nearly 50 years, has been left to rot, with weeds and even trees growing throughout the site after years of underinvestment and failed redevelopment plans.

Nearby, a petition was launched in the summer urging Wandsworth council to resurface the Tooting Bec Athletics Track after it failed an inspection a year earlier.

The track, used by former Olympian Jade Johnson, and this summer’s Tokyo 1,500m semi-finalist Katie Snowden, has not been relaid since the mid-1980s. Local MP Dr Rosena Allin-Khan said: “The track is a home to schools, clubs and aspiring athletes – to lose such a valuable asset in our community will be a devastating blow to so many of our young people.”

Budding table-tennis, badminton, volleyball, gymnastics and other sporting stars could also miss out if their local leisure centres close, as the John Carroll Leisure Centre in Nottingham has done, despite a campaign to keep it open.

Nearly two-thirds of the country’s main sports halls are past their expected lifespan or overdue refurbishment. A survey by the District Council Network (DCN), a cross party group which represents 180 district councils, has shown that 117 leisure centres, many with pools, are at risk of closure because of a £325million spending gap.

Councillor Dan Humphreys, DCN’s lead member for enhancing quality of life, said: “As these alarming findings show, the gyms, swimming pools and local leisure centres that communities rely on every day face a desperately bleak future with many on the brink of closing in the coming months due to financial losses incurred during the pandemic.”

However, there is still time to invest in our future sporting success, and hope for those skateboarding and BMX enthusiasts who are able to travel. The world’s first multi-storey indoor skatepark, F51, is due to open in early 2022 in Folkestone, Kent. The complex has facilities for beginners through to competition level.

Skateboard GB, the sport’s governing body, has seen its progression funding increase to £1.2million in order to find the stars of tomorrow among the 750,000 people actively skateboarding in the UK.

Meanwhile, Mayor of London Sadiq Khan has approved up to £550,000 for essential maintenance at the National Sports Centre, Crystal Palace, including the stadium.

The Department for Digital, Culture, Media and Sport has provided £600million for elite sport, £300million for grassroots sport and £100 million through the National Leisure Recovery Fund.

“In addition, the Government has allocated over £9billion directly to councils since the start of the pandemic which includes an additional £1.55billion of grant funding to meet additional service pressures,” says a department spokesperson.

As part of the Daily Express Save Our Olympic Dreams crusade, we have joined forces with charity Made By Sport to increase access to sporting facilities for young people. Local clubs in need of help can apply for funding via madebysport.com/clubsincrisis