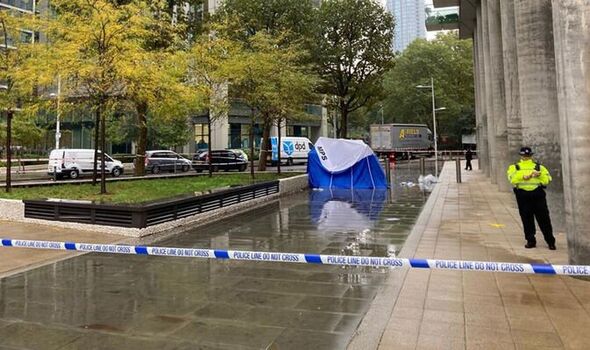 A young man has fallen to his death from a tower block in the capital’s central business district.

Emergency services remain outside the building in Canary Wharf, London, after the man in his 20s was pronounced dead at the scene in the early hours of the morning. A woman in her 20s was also found at the scene with head and facial injuries and has been rushed to hospital.

No one has been arrested and inquiries are ongoing into the circumstances surrounding his death.

A Metropolitan Police spokesperson said: “Police were called at 04:48hrs on Thursday, 20 October to reports of a disturbance involving two people at a residential block in Lincoln Plaza E14.

“Officers responded and located a female in her 20s with head and facial injuries. She has been taken to hospital.

“A short time later a male aged in his 20s was located outside following a suspected fall from height. Officers administered first aid prior to the arrival of LAS paramedics but he died at the scene.”

Local construction worker Grejib Koscwitz said the scene was “like a horror movie”.

He said: “There was a lot of blood and medical equipment everywhere. I had never seen anything like it. Me and the boys (other construction workers) were all taken aback. It’s not what you expect to see when you turn up to your shift. I’ve lived in England for six or seven years now and it was horrible, like the worst thing I’d seen being here.”

A security worker told My London: “I arrived to work this morning and was told what happened it’s very very scary. There’s about 30 floors here and balconies on all of them, I’m surprised nothing has happened like this before.

“Even an accident because when you’re that high up no one will survive, even off the first floor your not going to survive if you fall off.”

The tragedy happened near several apartment complexes but police do not believe there is a significant risk to the wider community at this stage.

Miguel Sancos, a 34-year-old taxi driver, was surprised to see the police scene.

He said: “I was working when it happened. One minute I was driving past and nothing, next I came back and there were police everywhere. I thought maybe it was a stabbing because I hear about that a lot on the news. These houses round here are very expensive so I was surprised.

“I saw the tent and knew someone was dead because I’ve seen on the news before. Lots of people would have had to walk past it today so it’s not nice.”