MOSCOW — Aleksei A. Navalny, the Russian opposition politician, is going to serve his prison sentence in a penal colony notorious for disciplinary measures considered harsh even by Russian standards, Russian news outlets reported on Monday.

Russia’s decision to transfer Mr. Navalny to a prison known for abusive treatment of inmates came even as the Kremlin faced mounting foreign criticism for the sentencing as well as an assassination attempt on Mr. Navalny last summer.

Mr. Navalny returned to Russia in January despite the government’s threats of arrest, after spending months in a Berlin hospital recuperating from being poisoned. He was subsequently convicted in a show trial of violating the terms of his parole during his stay in Germany and sentenced to more than two years in prison.

On Monday, the European Union placed sanctions on four senior Russian officials considered responsible for his prosecution, the first time the union has exercised that power under a new law to punish human rights violators worldwide. The officials are: Igor Krasnov, the prosecutor general; Aleksandr I. Bastrykin, head of the Investigative Committee, a law enforcement agency; Viktor V. Zolotov, the head of the National Guard; and Aleksandr Kalashnikov, the head of Russia’s prison service.

The European Union had already sanctioned six Russians and a state scientific research center in response to the poisoning.

Russia was expected to be hit Monday with another round of criticism with the release of a United Nations report on Mr. Navalny’s poisoning and prosecution.

Russia’s prison service has not officially disclosed Mr. Navalny’s whereabouts, following the customary Russian practice of keeping inmates incommunicado while in transit and in the first days or weeks at a new prison. 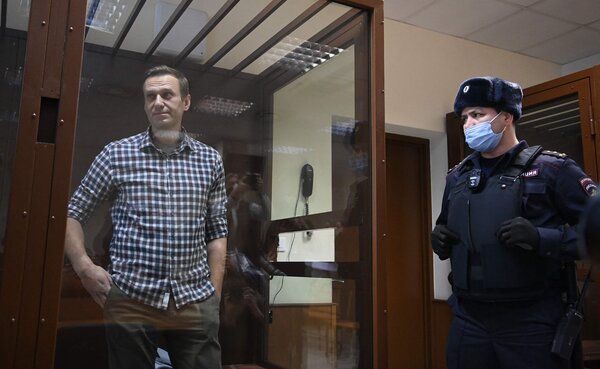 Nevertheless, the news reports on state-run outlets offered an early glimpse of the likely conditions of his imprisonment. The site, Penal Colony No. 2 and also known by its acronym IK2, is in the Vladimir Region in European Russia east of Moscow, indicating Mr. Navalny will not serve his sentence in the country’s harshest prisons in Siberia or the Arctic.

But the colony is known for strict enforcement of rules and for making extensive use of a separate, harsher, punishment facility within its walls where inmates are not allowed to mingle or even talk among themselves, according to former inmates and lawyers.

The site is typical for Russia’s colony-type prisons that evolved, with a few improvements, from the gulag camps established in the 1930s. Inmates live collectively in groups of several dozen called brigades in low slung, two-story buildings surrounded by walls and barbed wire.

While guards oversee the prison, fellow prisoners maintain discipline within the brigades, either in cooperation with guards, a group known as “activists,” or as criminal gang leaders, known as “thieves in law.”

Penal Colony No. 2 is controlled by “activists” in cahoots with the warden, according to former inmates, an arrangement that will allow the prison administration to strictly control Mr. Navalny’s life at all times. Activist-controlled prisons are called “red zone” facilities, in Russian prison parlance.

Penal Colony No. 2 is, “the reddest of red” prisons, a lawyer, Maria Eismont, who represented a former convict at the site, told Open Media, an opposition news site.

Dmitri Dyomushkin, a nationalist politician who served time in the colony, described conditions in the separate punishment brigade, where Mr. Navalny could wind up for infractions as minor as failing to button his jacket, as psychologically harrowing.

Inmates spend hours standing with their hands clasped behind their backs, looking at their feet, forbidden from making eye contact with the guards, Mr. Dyomushkin said in an interview on the Echo of Moscow radio station.

“They will find many ways to pressure him,” Mr. Dyomushkin said of Mr. Navalny’s term in Penal Colony No. 2. In these conditions, he said, “your personality deforms.”