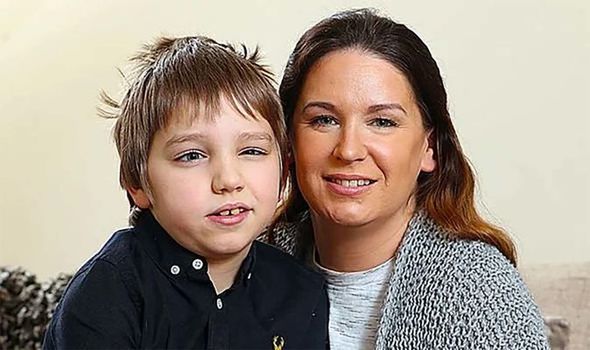 Yesterday the 10-year-old was triumphant after a powerful Parliamentary committee recommended his crackdown be inserted into the Draft Online Safety Bill. The lad, who has epilepsy, has been campaigning for “Zach’s Law” to criminalise abusers who trigger seizures by sending flashing light messages.

Backed by his mother Claire Keer and the Epilepsy Society, he convinced the Commons panel scrutinising the proposals to include his demands.

His incredible efforts have been backed by the Daily Express’s Unmask the Online Trolls campaign.

Claire, 40, of Liversedge, West Yorkshire, spoke of her “relief” yesterday, saying: “Zach has met with politicians, the Law Commission and editors of national newspapers. It has meant several days out of school.

“The recommendations in the report make every missed day worthwhile, not just for Zach but also for the thousands of people with photosensitive epilepsy around the world who run the risk of a seizure every time they go online.”

The Government now has two months to consider their Bill proposals, which cover a range of internet threats, before responding.

Zach, who also has cerebral palsy, launched his campaign last year after staging a fundraising event.

Emulating his hero, the late Captain Sir Tom Moore, he pulled in £20,000 for the Epilepsy Society by completing laps of his garden totalling 2.6miles.

But trolls bombarded the social media pages linked to the event with hundreds of flashing messages, GIFs and garish pictures, in a bid to trigger seizures.

Zach did not see the messages, but three of his online followers suffered non-life-threatening reactions to them.

Claire said: “Ever since Zach was attacked online 18 months ago, we have been working with the Epilepsy Society to try and change the law and bring these criminals to justice.

“I would like to thank the scrutiny committee for recognising the seriousness of this crime.

“I would also thank them for supporting our call to safeguard people like Zach who was maliciously targeted, but who has stood up so bravely for what is right.”

Committee member Dean Russell MP said: “Zach Eagling is an inspiring 10-year-old who’s been campaigning to make it a crime to intentionally try and trigger epilepsy.

“It is a brave act, but it shouldn’t be on the shoulders of a child to keep him and his peers safe.

“None of this would be allowed to happen offline. The Online Safety Bill will establish clear responsibilities on platforms that are expected to put safety first.”

I am proud that our country is leading the way in bringing our values of courtesy and civility to the badlands of social media.

The criminal law should now protect vulnerable people from the keyboard warriors who bully disabled people behind a mask of anonymity, maliciously targeting people with epilepsy with flashing images designed to cause seizures.

We believe Zach’s Law is the first specifically designed to protect people with epilepsy.

I would like to thank the scrutiny committee for recognising the seriousness of this crime and supporting our call to safeguard people like Zach who was maliciously targeted, but who has stood up so bravely for what is right.

We have said from the start that the criminal law relating to online communication comes from the time of typewriters and telegrams and it needs to be updated.

Before Twitter and other platforms, it would not even have been possible to identify a group of people with a hidden disability on the streets of Birmingham or London, let alone target them with flashing images to induce a seizure.

Following an evidence session with the Joint Committee on the Draft Online Safety Bill, Twitter has agreed to lead collaborative work with other social media platforms to find solutions to stop this criminal activity reaching its victims.

Ideally, there would be no prosecutions under the proposed Zach’s Law because social media firms would put in place effective safeguarding measures.

Social media can be a lifeline for people with epilepsy in terms of engagement and peer support but only if we use our powerful justice system to make it safe.

Clare Pelham is chief executive of the Epilepsy Society