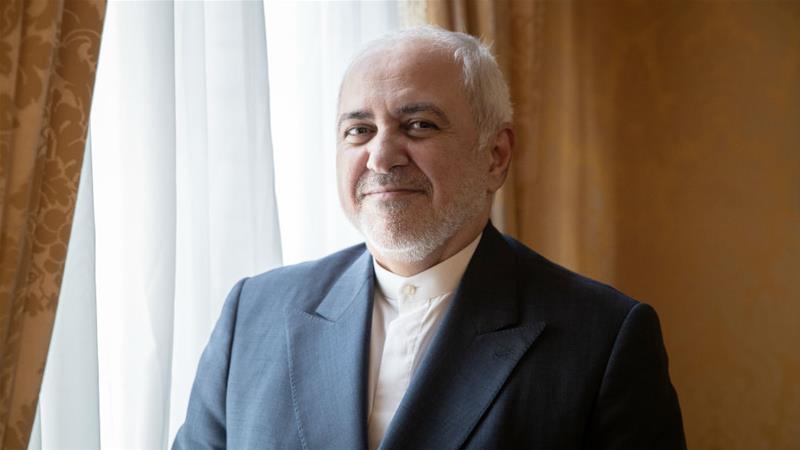 Iran’s Foreign Minister Mohammad Javad Zarif has said that suggestions by French President Emmanuel Macron about defusing the crisis over Iran’s nuclear programme were a step in the right direction, but more work needed to be done.

“President Macron made some suggestions last week to President [Hassan] Rouhani and we believe they are moving in the right direction, although we are not definitely there yet,” Zarif told the AFP news agency after meeting Macron for talks in Paris on Friday.

“We had a good discussion today,” Zarif said. “We discussed possibilities. He is now going to discuss with European partners and other partners to see where we can go from here.”

The talks came one day before Macron begins hosting world leaders, including United States President Donald Trump, for the three-day Group of Seven (G7) summit in Biarritz, with the Iranian nuclear programme set to be a central issue.

“We understand that Macron has been speaking on this subject with President Trump on the phone, and with Vladimir Putin earlier this week, so he’s using every opportunity, it would seem,” said Al Jazeera’s Nadim Baba, reporting from Paris.

“It’s quite possible that there will be some sort of agreement on what we believe Macron is suggesting, and that’s allowing certain countries, for a limited period of time, to buy Iranian crude oil – and that can allow discussions with Iran to begin in earnest.

“Macron admits there are divisions in the G7 over Iran, but what’s not clear is if this proposal will make any headway with President Trump and his Security Adviser John Bolton, who have consistently pushed a very hard line against Iran.”

Iran wants to see relief from the harsh sanctions re-imposed by the Trump administration.

If Tehran were convinced Europe could begin to fulfil its side of the bargain on the nuclear deal – that is, to ensure Iran could continue to trade in key industries, notably oil – Iran could then reverse the measures it took to ramp up its nuclear programme.

“Once Europe starts implementing its commitments, Iran will also be prepared to reverse the steps that it has taken,” Zarif said.

Pressed on what the suggestions involved, Zarif did not offer specifics but said Europe needed to find ways to ease the situation for Iran, even with the US no longer part of the deal.

France, Germany and Britain have set up a financial mechanism named INSTEX that aims to facilitate continued trade with Iran despite the US sanctions, but it is limited in scope and has yet to provide significant benefits.

“We are searching for ways Europe can, in fact, implement its commitments so that we can reverse the steps we have taken,” Zarif said.

“For us, what is important is to be able to continue to conduct business with the European Union,” he said, adding that discussions were under way as to whether this can be done “with or without the US”.

In a message to Europe, Zarif said that it was possible to solve the issue even without the involvement of the US in the nuclear deal.

“I do not think the US holds all the cards. If Europe and the international community decide to do so, they can, in fact, take measures required to sustain the deal,” he said.

The 2015 nuclear deal was seen as a landmark foreign policy achievement of US President Barack Obama and a key moment in ties between the US and Iran, after relations had been severed in the wake of the 1979 Islamic revolution that removed the pro-West Shah – who had himself been supported by a 1953 US-UK coup against Iran’s then-prime minister.

But to the dismay of Washington’s European allies, Trump walked out of the deal last year and tensions have intensified since, raising fears among some observers of a looming military confrontation.

One issue of particular tension in recent weeks has been freedom of navigation after Iran seized three foreign ships in the Gulf, including the British-flagged Stena Impero, after an Iranian tanker was held by British forces in Gibraltar.

The British overseas territory allowed the ship – suspected by the US of transporting oil to Syria in breach of sanctions – to sail after rejecting a US demand to seize the vessel.

Zarif expressed fury that “the US is harassing our ship in international waters and preventing freedom of navigation”.

But he declined to say where the vessel, now named the Adrian Darya, was heading.

“We will not be announcing its destination because the United States will further sabotage our economic activities,” he said.

Zarif insisted that Iran did not want war with the US but warned that a ramped-up Western naval presence in the Gulf increased the risk of accidents, which analysts say could start a wider confrontation.

“We do not seek military confrontation,” Zarif said.