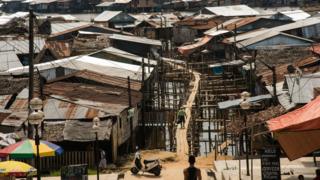 A British environmental activist and Catholic missionary has been found dead at a hostel in Peru.

The body of Paul McAuley, 71, was discovered by students on Tuesday in the Amazon city of Iquitos.

In a statement, the religious order that Mr McAuley belonged to said that his body had been burned.

An investigation has been launched and officials are questioning six people who lived at the youth hostel, which was run by Mr McAuley.

The activist, who was born in Portsmouth, had lived in the country for more than 20 years and was awarded an MBE for setting up a school in a poor community of the capital, Lima.

He came to international attention in 2010 when the Peruvian government ordered his expulsion. He was accused of inciting unrest among indigenous people for protesting against environmental destruction.

It led hundreds of people to demonstrate in support of him and and he eventually won the right to stay after a lengthy court battle.

Environmental groups were quick to pay tribute to Mr McAuley.

“It has been a privilege to meet and work with Brother Paul,” Julia Urrunaga, who works for the Environmental Investigation Agency in Peru, said in a tweet.

Mr McAuley first travelled to the Peruvian Amazon in 2000 to support indigenous activists.

In 2010, he told the BBC that he hoped to teach Peruvians about their environmental and human rights.

“Education is often accused of inciting people to understand their rights, to be capable or organising themselves to ensure their human rights,” he said.

“If that’s a crime, then yes I’m guilty,” he added. “As a member of a Catholic order, my life’s been dedicated to human and Christian education.”