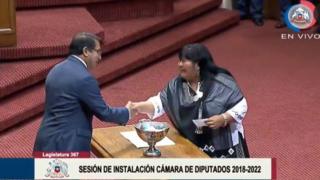 Emilia Nuyado and Aracely Leuquén on Sunday became the first two women of the indigenous Mapuche group to become members of Chile’s Congress.

They received rapturous applause from their fellow lawmakers when they cast their first votes in the lower house.

Both Ms Nuyado and Ms Leuquén represent the southern Araucanía region, where a conflict between the Mapuche and the state has been intensifying.

President Sebastián Piñera referred to the conflict at his inauguration.

The president said that he would make solving the centuries-old conflict with the Mapuche one of his priorities.

Who are the Mapuche?

In recent years, the Mapuche have waged a sometimes violent campaign to win back that land.

The issue recently came to global attention when Pope Francis travelled to the region and said that “destructive violence” between the indigenous Mapuche people and the state was not the answer.

Tensions between the Mapuche and the state have increased in recent years, with armed groups burning houses, churches, lorries and forest plantations with increasing frequency.

While President Piñera did not say how he would go about solving the conflict, which centres around issues of land ownership and the recognition of the Mapuche language and culture, the fact that he mentioned it among the five main priorities for his administration nevertheless surprised many Chileans.

“Every time we have divided, we have reaped our most bitter and painful defeats,” Mr Piñera said.

Ms Leuquén, who is part of President Piñera’s Chile Vamos (Let’s go, Chile) coalition said the government would face “a great challenge” in Araucanía but that she proposed “dialogue and tolerance” as the way forward.

She has a long history of championing Mapuche issues, such as increasing the number of scholarships for the community and opposing the use of anti-terrorist legislation to deal with the Mapuche conflict.