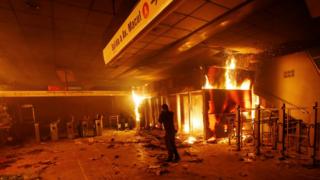 A state of emergency has been declared in the Chilean capital, Santiago, after protests sparked by increased metro ticket prices turned violent.

Protesters – many of them high school and university students – jumped turnstiles, attacked several underground stations, started fires and blocked traffic, leaving widespread damage across the city and thousands of commuters without transport.

Television pictures showed protesters throwing stones, attacking police vehicles and burning at least one bus. Anti-riot police used tear gas and batons against some protesters, who have been demonstrating for days against the increase.

The unrest exposes divisions in the country, one of Latin America’s wealthiest but also one of its most unequal. There have been growing complaints about the cost of living – especially in Santiago, a city of some six million people – and calls for economic reforms. 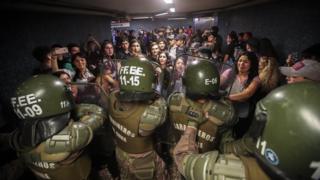 Speaking on television, President Sebastián Piñera said the aim of the state of emergency was to “ensure public order and the safety of public and private property”. The measure allows authorities to restrict people’s freedom of movement and their right to assembly.

He also said the government would “call for a dialogue… to alleviate the suffering of those affected by the increase in fares”.

Earlier this month, the government increased fares by as much as $1.17 (£0.90) for a journey during peak hours, blaming higher energy costs and a weaker peso. 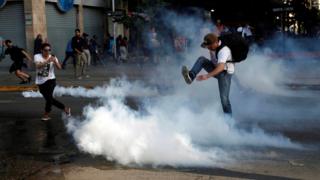 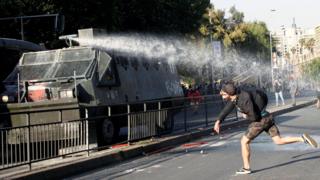 Speaking to Radio Agricultural earlier, President Piñera said: “It’s one thing to demonstrate and another to commit the vandalism we have observed. This isn’t protest, it’s crime.”

It was not immediately clear how many people had been detained or injured. Despite the protests, authorities said they would not reverse the fare increase.

The Chilean government condemned what it described as “acts of violence and vandalism” that were “being carried out by organised groups”, and invoked the State Security Law that imposes harsher sentences for those found guilty of public disorder.

The protests continued after nightfall, with people clanging pots and blocking traffic.

Energy company Enel Chile said vandals had set fire to its high-rise corporate headquarters in the centre of Santiago. It said its workers were evacuated and no-one was injured. 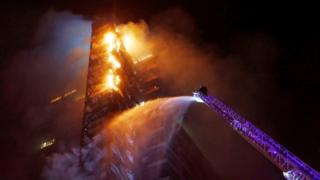 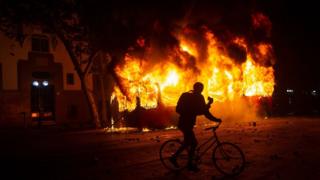 After Friday’s protests, metro authorities said all lines would remain closed for at least two days due to the serious destruction that made it impossible to operate the system safely. The damages were estimated at $700,000, including broken surveillance cameras and other equipment.

Santiago’s underground system is considered one of Latin America’s most modern, with 140km (86 miles) of track and 136 stations.