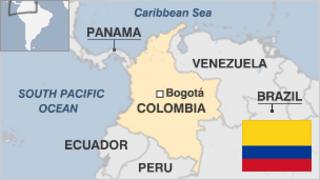 Colombia has significant natural resources and its culture reflects the indigenous Indian, Spanish and African origins of its people.

But it has also been ravaged by a decades-long violent conflict involving outlawed armed groups, drug cartels and gross violations of human rights, although, since 2002, the country has been making significant progress towards improving security.

The fourth largest country in South America and one of the continent’s most populous nations, Colombia has substantial oil reserves and is a major producer of gold, silver, emeralds, platinum and coal.

It also has a highly stratified society where the traditionally rich families of Spanish descent have benefited from this wealth to a far greater degree than the majority mixed-race population, providing a ready constituency for left-wing insurgents.

Ivan Duque was elected in June 2018 after campaigning on a ticket to rewrite the peace deal signed with the former rebel group FARC.

A lawyer with a degree in economics, Mr Duque represents many Colombian voters who were outraged by concessions given to the former rebels, including reduced sentences for those who confessed to their crimes.

He was inaugurated a few days after his 42nd birthday.

Peace accords were signed in 2017, but threats against the media remain, says Reporters Without Borders.

Media ownership is concentrated among a handful of privately-owned groups. Television is the main news source.

There are no curbs on online access, but limited infrastructure and high prices are obstacles to internet take-up.

1819 – Simon Bolivar defeats the Spanish at Boyaca. The Republic of Gran Colombia is formed, comprising modeern-day Ecuador, Panama and Venezuela.

1829-30 – Gran Colombia is dissolved when Venezuela and Ecuador split off, leaving present-day Colombia and Panama a separate state known as Nueva Granada.

1848-9 – Emergence of the Conservative and Liberal parties, whose often violent rivalry comes to dominate Colombian politics.

1899-1902 – “The War of the Thousand Days”: around 120,000 people die in civil war between Liberals and Conservatives. Panama becomes an independent state.

1948-57 – “La Violencia”: Civil war between the Liberals and Conservatives kills some 250,000-300,000 people before being ended when the two parties form the National Front coalition.

1998-9 – Start of peace negotiations between the government and Farc, which is granted a safe haven in the south-east of Colombia to help talks along.

2002 – The tortuous peace talks are broken off and violence rises again after Farc hijacks an aircraft; independent Alvaro Uribe is elected president on promises to crack down hard on rebel groups.

2016 – The government and Farc rebels sign a historic peace accord ending 52 years of armed conflict. However, a few weeks later voters reject the deal in a national referendum, and a new agreement has to be drawn up.