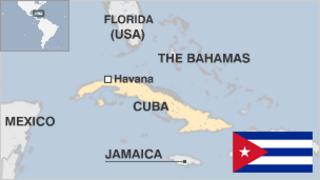 It also defied predictions that it would not survive the collapse of its one-time supporter, the Soviet Union.

Since the fall of the US-backed dictatorship of Fulgencio Batista in 1959, Cuba has been a one-party state led by Mr Castro and – since February 2008 – by his chosen successor and younger brother, Raul.

Fidel Castro exercised control over virtually all aspects of Cuban life through the Communist Party and its affiliated mass organisations, the government bureaucracy and the state security apparatus.

Exploiting the Cold War, Fidel Castro was for decades able to rely on strong Soviet backing, including annual subsidies worth $4-5 billion, and succeed in building reputable health and education systems. But, at least partly because of the US trade sanctions, he failed to diversify the economy.

The US and Cuba agreed in 2014 to normalise relations.

Miguel Diaz-Canel became president in April 2018 in a handover ending six decades of rule by the Castro family.

Mr Diaz-Canel, aged 57 at the time of his inauguration, is a former engineer born after the revolution that brought Fidel Castro to power.

He has promised to maintain the island’s one-party communist system after being chosen president by parliament.

Cuba has the most repressive media environment in the Americas, says Freedom House. Almost all traditional media are state run.

Online access is tightly controlled and prohibitively expensive. Many Cubans use “the Package” – a digest of digital content distributed on USB sticks.

Some key dates in Cuba’s history:

1902 – Cuba becomes independent under the protection of the US.

1961 – US breaks off diplomatic relations in response to the nationalization of US-owned properties, and later imposes a complete commercial embargo.

1961 – Cuban exiles backed by the US try to invade Cuba at the Bay of Pigs, but are defeated.

1962 – The US and the Soviet Union have a showdown that almost touches off war after the US discovers Soviet nuclear missiles on Cuba. The confrontation ends with the Soviets removing the missiles and the US agreeing never to invade Cuba.

1975 – Castro sends troops to Angola to help fight rebels backed by South Africa. It is the start of 15 years of war in which 300,000 Cubans will fight.