More than 35 young people have been killed in 12 days, some of them tortured, as families call for justice. 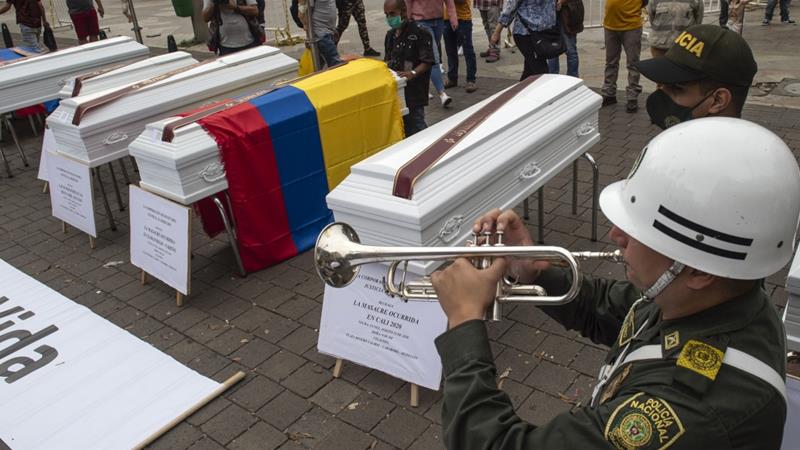 His son, Jose, was killed in the impoverished Llano Verde neighbourhood in the western Colombian city of Cali.

“When the children didn’t come home, I was the first parent to go out looking. We went to the police station, then we walked all around, to places we knew he usually went,” Caicedo told Al Jazeera. “When I heard he was with a group of other children, I felt more relaxed. But, we found all of them, they’d been tortured, cruelly murdered, it was horrible.”

This example is just one of a spate of killings that has swept through some of Colombia’s rural regions during recent weeks which have targeted mostly young people and shocked communities.

“We need to know who killed them and who is guilty. That’s what we want… that there’s no impunity,” Caicedo said. “We’ve been waiting for many days now and we have had no answers whatsoever.”

Erlendy Cuero of AFRODES, an association of displaced Afro-Colombians, told Al Jazeera people in Llano Verde are now worried and living in fear.

“People who have children are scared that the same thing that happened to those five could happen to theirs,” she said. “There’s a lot of fear because this massacre made people realise that these groups don’t really care who they’re killing, even if it’s children.”

There were three separate killings in one day on Friday last week, with a total of 17 deaths in the Arauca, Cauca and Narino provinces.

In Narino, eight young people were killed in a separate attack on August 16 when an armed group entered a house and shot them. 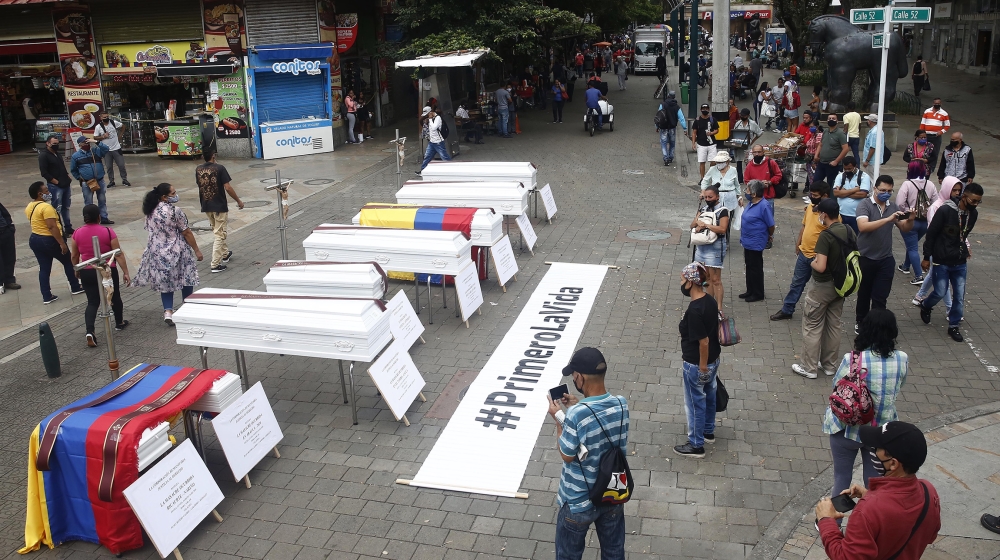 Local media reported on Monday that three young people were killed by armed groups in the town of Venicia in the Antioquia province.

None of the perpetrators in any of these incidents has been identified.

President Ivan Duque has come under increased pressure and scrutiny to take more action and travelled to the most affected province of Narino, near the Ecuadorian border, on Saturday to hold a security council on the situation.

His visit was met with booing from locals where he visited victims’ families.

The governor of the troubled province requested increased security due to the spate of killings, which are happening at the height of Colombia’s coronavirus pandemic.

The Andes director for the Washington Office on Latin America (WOLA) told Al Jazeera the president’s response has been “disappointing”.

“These are not merely collective homicides due to organised crime and terror. Rather, they are occurring because Duque’s government is not implementing the peace accord and addressing the structural issues that lead to violence,” she said. “The rural, poor, ethnic groups and youth are paying the highest price.”

The Americas director of Human Rights Watch, Jose Miguel Vivanco, has also condemned the spate of attacks, saying “the situation is deteriorating.”

Oscar Palma, a professor at Rosario University and expert in security issues in Colombia, said these types of killings “are nothing new” and have been used by armed groups for many years to increase territory for cocaine production and drug trafficking in the Andean nation.

“Territorial control is everything. It means controlling [drug trafficking] routes, imposing your own rules on the population,” Palma said, adding that local residents who oppose the groups’ presence can find themselves forcibly recruited to work for them, or be killed.

The researcher said many of the actors believed to be involved, like the left-wing National Liberation Army group (ELN), Clan de Golfo, one of the most powerful drug cartels in the country and dissident fighters from the Revolutionary Armed Forces of Colombia (FARC) clash as they vie for control over territory, highlighting the difficulty the government faces in controlling the violence.

“The state has tried different strategies to reach the communities and fight these criminal groups, but it’s very difficult because there is a significant lack of state institutions in these regions… it’s very difficult to try and destroy these big and small groups,” he said.

‘Those who killed my son need to pay’

For Sergio Guzman, political analyst and director of Colombia Risk Analysis, the most shocking thing is “how quickly the situation on the ground has eroded”.

“When Duque took office there was an encroachment of criminal armed groups that seemed to have gone unabated, taking over significant areas and they’re now in a much more emboldened position, where they are not only exerting territorial control, but now, actually going off and committing these gruesome crimes,” Guzman said.

“President Duque is trying to contain the damage by labelling them as communal homicides, but changing the rhetoric about this is not going to change the truth on the ground, which is that the government is losing ground against criminal groups who are gaining territorial control – that’s what’s most concerning,” he added.

But for parents like Caicedo, now mourning the death of his son, all they can do is wait to see if justice will prevail in a country with infamously high impunity rates.

“There are still a lot of innocent children in this neighbourhood, and we need justice for them. Murderers continue to walk among us, and this is what fills us with fear,” Caicedo said. “Those who killed my son,” he pauses and takes a deep breath, “need to pay for it”.