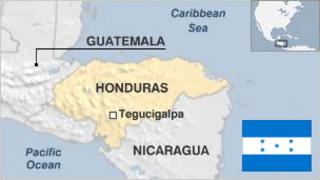 Honduras has a long history of military rule, corruption, poverty and crime which have rendered it one of the least developed and most unstable countries in Central America.

Until the mid-1980s Honduras was dominated by the military, which enthusiastically supported US efforts to stem revolutionary movements in the region. Since then, civilian leaders have sought to curb the power of the military, with varying degrees of success.

Gang violence, drug wars and extortion are commonplace and the country is notorious for having the world’s highest murder rate per capita.

Inequalities in wealth remain high, with nearly half of the population living below the poverty line. Thousands of Hondurans leave to go to the US each year and the remittances they send home are a crucial source of income for many families.

Juan Orlando Hernandez took office in January 2014, promising a zero tolerance approach towards organized crime and pledging to bring down the high levels of drug-related violence.

He won elections in the previous November, beating off challenger Xiomara Castro, the wife of former president Manuel Zelaya – whose ouster in a 2009 coup triggered a deep political crisis.

He was declared winner of the November 2017 presidential election, which was disputed by his main rival Salvador Nasralla. Several people died in protests against the election outcome.

Honduras can be a dangerous country for journalists. Reporters working for opposition media risk threats and physical attack.

Some key dates in the history of Honduras:

1502 – Christopher Colombus lands in Honduras, a country originally inhabited by indigenous tribes, most notably the Maya. Spanish colonisation begins in 1524.

1821 – Honduras declares independence, becomes part of Mexican Empire until 1823, when it joins United Provinces of Central America until federation collapses in 1838.

1839 – Republic falls under influence of US corporations which establish vast fruit plantations.

1981-82 – First civilian government in over a century elected but military remains influential.

1980s – Honduras is a stronghold for the US in its proxy war against socialist Sandinistas in Nicaragua, training and funding Contra rebels. Many Hondurans flee to the US.

2000-04 – US deports 20,000 people to Central America, including rival groups – Salvatrucha and 18 Street – which bring gang culture to the region.

2007 – A long-time US ally, Honduras breaks with tradition as President Manuel Zelaya becomes the first Honduran president to visit Cuba in 50 years.

2009 – Several years of a weak but strengthening democracy are curtailed when President Manuel Zelaya is deposed in a military coup.